Since its inception in late 2006, the MIT Energy Initiative (MITEI) has become MIT’s hub for energy research, education, and outreach. Through these three pillars, MITEI plays a catalytic role in accelerating responses to the many challenges facing our global energy system. MITEI’s mission is to develop low- and no-carbon solutions to efficiently, affordably, and sustainably meet global energy needs while minimizing environmental impacts, dramatically reducing greenhouse gas emissions, and mitigating climate change.

As a vital component of MIT’s Plan for Action on Climate Change and MITEI’s research program, the Low-Carbon Energy Centers present opportunities for faculty, students, industry, and government to advance research and development in key technology areas and energy subsector systems for curbing climate change, from solar energy to electric power systems, mobility, and other areas.

The Initiative also delivers comprehensive analyses for thought leaders, policy makers, and regulators, such as the “Future of” series of reports. The most recent, The Future of Nuclear Energy in a Carbon-Constrained World, was published in September 2018 with the Nuclear Science and Engineering Department. A new study, The Future of Storage, is now underway and focuses on the role of energy storage in making electricity systems cleaner, more efficient, and more affordable. Another series of reports examines rapidly changing segments of the energy sector; the 2019 Insights into Future Mobility report, the product of the multi-year Mobility of the Future study, explores scenarios for carbon reductions within the personal mobility segment of the transportation sector. The other report in this series, Utility of the Future (2016) provides guidance to policy makers, regulators, and industry on emerging issues in the electric power sector, using a neutral framework within which to evaluate the economic, regulatory, and technological impacts of the ongoing evolution of the power sector worldwide.

MITEI leads Institute energy education efforts and has engaged thousands of undergraduate, graduate, and postdoctoral students, incorporating bringing current research developments and results into teaching and facilitating applied learning experiences for students through sponsored research opportunities and other programs. These programs and experiences prepare the next generation of innovators, entrepreneurs, and policy makers to collaborate on solutions to global energy challenges. Learning opportunities include the Energy Studies Minor, Undergraduate Research Opportunities Program in energy, short modules during the Independent Activities Period, an energy-focused first-year pre-orientation program, the graduate Society of Energy Fellows, and a new series of online energy classes to reach a global audience. Faculty associated with MITEI help shape energy education at both the undergraduate and graduate levels by teaching, advising, and developing new curricula.

MITEI’s Tata Center for Technology and Design has provided extensive support to Master’s and PhD students through fellowships sponsored by the Tata Trusts. Tata Fellows have worked throughout India, as well as in Nepal, Kenya, Nigeria, Tanzania, Uganda, Rwanda, Brazil, Colombia, and Venezuela, traveling at least twice a year to immerse themselves in the social, political, and economic aspects of their research in the developing world. Their experiences abroad inform their ongoing research with the goal of catalyzing positive social impact in the form of policy support and affordable products and services. Through support for these students, and through thoughtfully crafted research projects in the fields of energy, water, environment, housing, health, and agriculture, the Tata Center advances its mission of bringing technical talent and experience to bear on the challenges of the developing world.

MITEI’s outreach efforts foster dialogue within the research community; across the academic, industry, and government sectors; and provide the public with context on current energy issues. In addition to informing public policy through research reports, MITEI facilitates this exchange of information by hosting and sponsoring events on campus and by supporting faculty and staff participation in external events. The MITEI communications team also highlights the work of the MIT energy community across print and digital platforms, such as Energy Futures magazine, MITEI’s website, podcasts, and social media, as well as through media outreach.

Progress since the 2015 MIT Plan for Action on Climate Change

In the nearly five years since MIT’s Plan for Action on Climate Change was announced, MITEI has been actively implementing elements of the plan.

The following sections provide a selection of examples of MITEI research, education, outreach, and engagement efforts since the launch of the climate plan in October 2015 through the end of June 2020; more examples can be found on MITEI’s website. 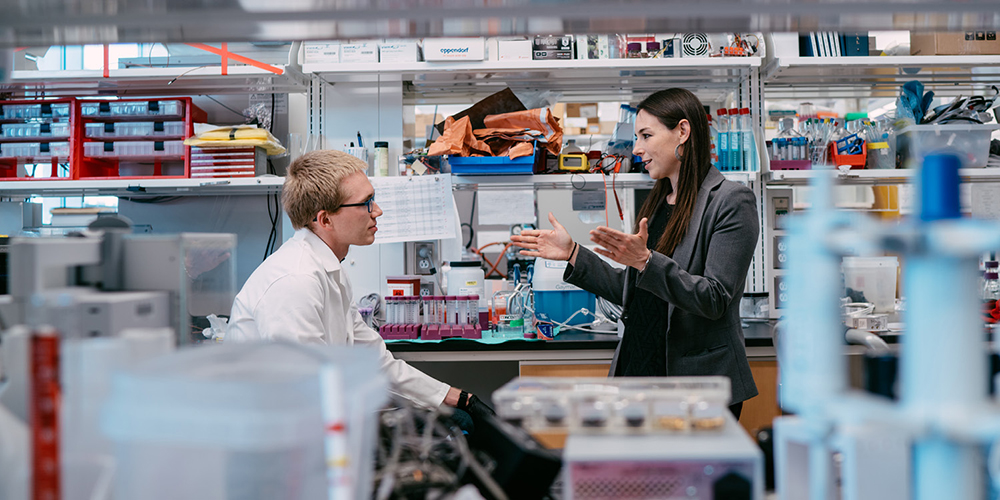 Low-Carbon Energy Centers: First announced in the 2015 MIT climate plan, the Centers are dedicated to tackling the most pressing energy challenges related to climate change from key technological and economic perspectives (see related Boston Globe feature from the launch of the Centers). They encompass areas of research that were already underway through MITEI prior to the climate plan, and the desire to create a locus for more research in these areas. Each of the Centers is led by MIT faculty co-directors and has a distinct focus. The Center model enables smaller companies along the energy value chain to collaborate with MITEI, providing financial support and industry perspectives to help advance these technology areas. In addition, by highlighting MITEI’s commitment and capabilities in these important areas for climate change mitigation, we have encouraged more investment in this research both through the Centers and through existing memberships in MITEI. As of the end of FY2020, twenty-five total new and current MITEI members have committed support for the Centers—with some members supporting multiple Centers. Here is a sample of members and Center activities—some additional Center-funded projects are described in later project examples. 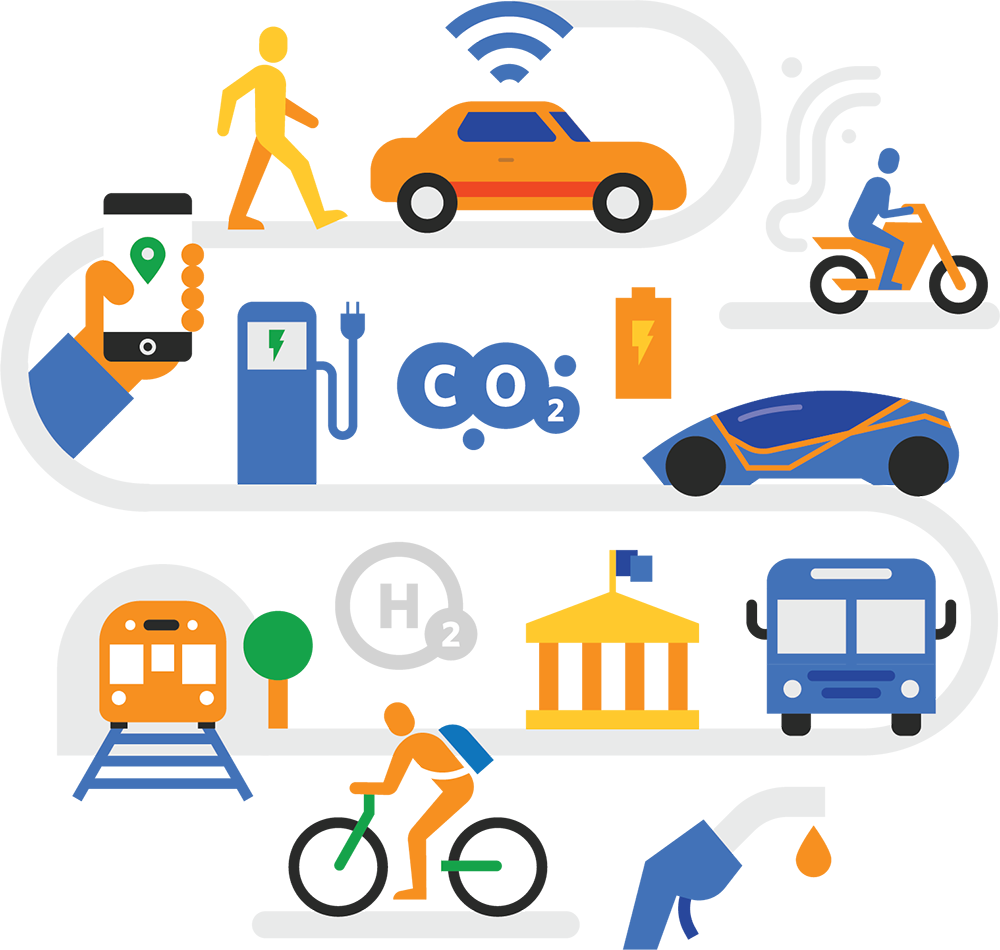 MITEI’s Insights into Future Mobility report explores how individual travel decisions will be shaped by complex interactions between technologies, markets, business models, government policies, and consumer preferences. The culmination of MITEI’s three-year Mobility of the Future study, the report highlights the importance of near-term action to ensure the long-term sustainability of personal mobility.

Major studies and reports: MITEI has convened and supported researchers across the Institute to prepare and publish in-depth analyses of key technologies and sectors, sharing them widely with governmental and industry audiences that have used the reports to inform policy and business decisions. Major reports since 2015 include:

Research engagement with industry: Since the advent of the climate action plan in 2015, of the 177 PIs who worked on MITEI projects, 129 were funded by traditional energy companies that are MITEI members, for projects that are primarily aimed at decarbonizing the energy sector throughout the supply chain (sources, production, conversion, transmission and distribution, and end use). These include solar, energy storage, nuclear fission, fusion energy, carbon capture, and other areas. About half of this work has taken place through MITEI’s Low-Carbon Energy Centers. The research in MITEI’s portfolio, and the dollars that support it from both traditional energy companies and other MITEI members and donors, is at the beginning of an innovation supply chain that, over time, we expect to yield breakthrough discoveries, technologies, methods, and products that will lead to reduced emissions, net-zero emissions, and ultimately negative emissions—as part of the overall global effort to mitigate climate change. Other MITEI research sponsored by traditional energy companies is related to improving the energy efficiency and reducing environmental impacts of existing technologies and processes. 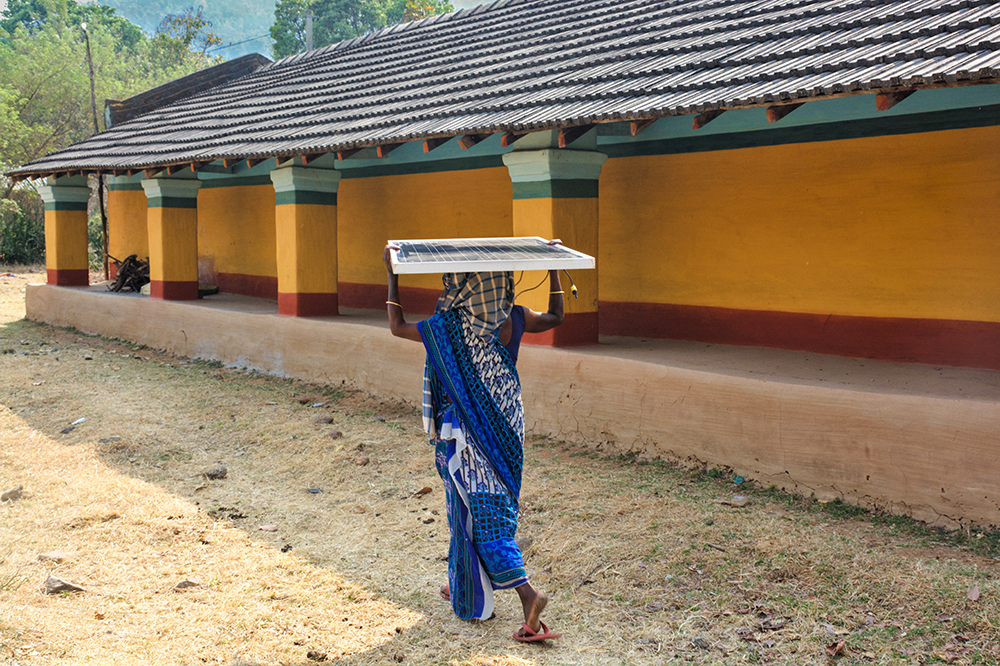 A woman carries a Khethworks solar panel. The efficiency of Khethworks’ groundwater pump enables it to be powered by smaller panels, making the system portable. Khethworks is an MIT startup that emerged from the Tata Center. Photo courtesy of Khethworks.

Startup companies: To date there have been at least three dozen energy-related startups that MITEI has supported at an early stage, including through the Seed Fund, which pools funding from MITEI’s highest-level members (fossil fuel companies and others), and competitively allocates it to promising early-stage research projects. While some startup companies developed out of research supported by MITEI Seed Fund grants, others were founded by individuals who engaged with MITEI in various ways (including UROPs, Energy Studies Minors, Graduate Energy Fellows, and postdocs), and still others received different kinds of MITEI support including mentorship and connections to external funding sources. Here are just a few examples:

Collaborations with the U.S. Department of Energy on new research centers: 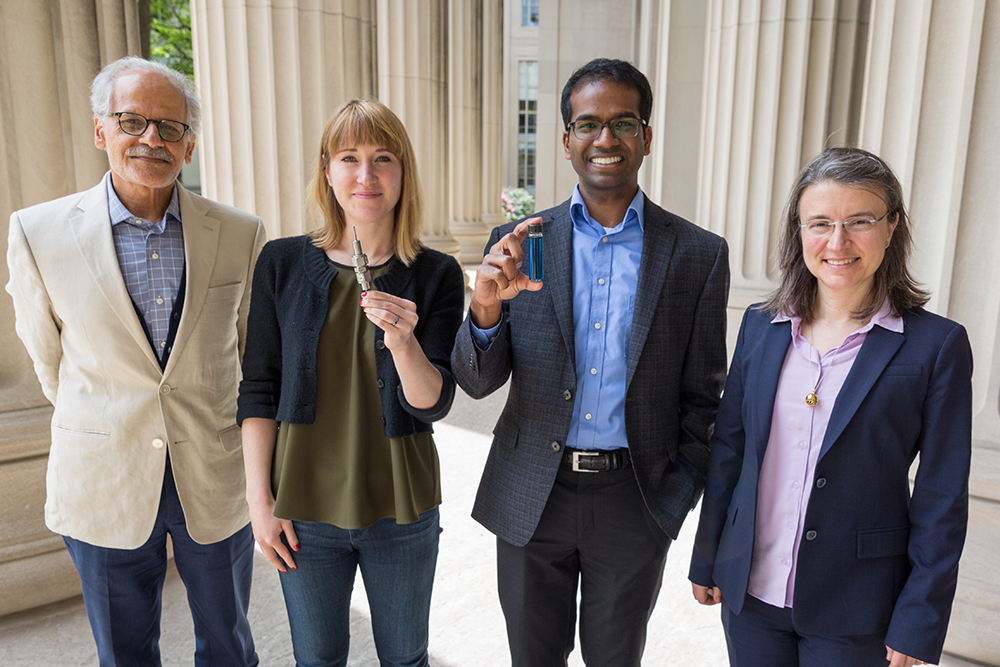 Other MITEI research examples include:

Additional projects MITEI and its members have supported since the launch of the climate plan include research in a range of science, technology, and policy areas; here is a sample of some projects in different areas: 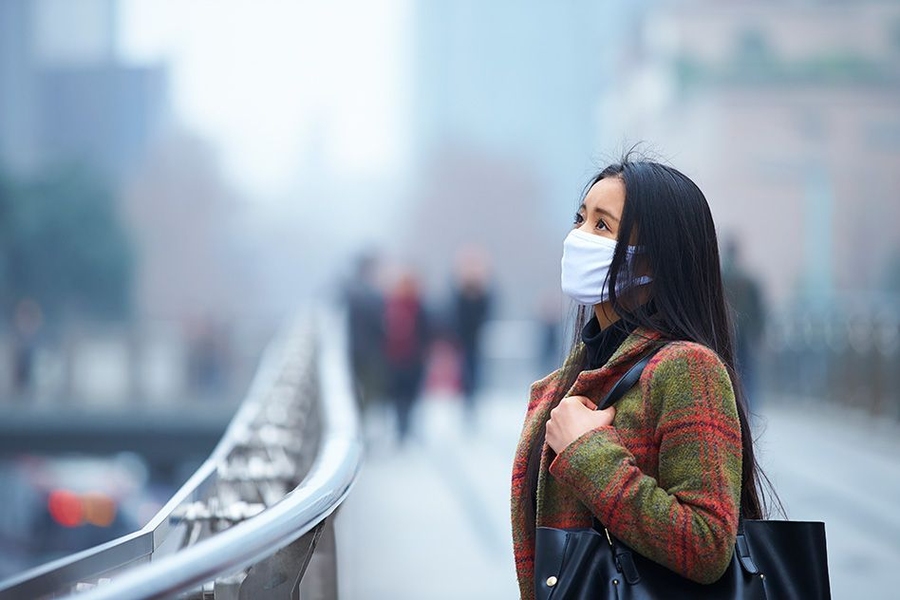 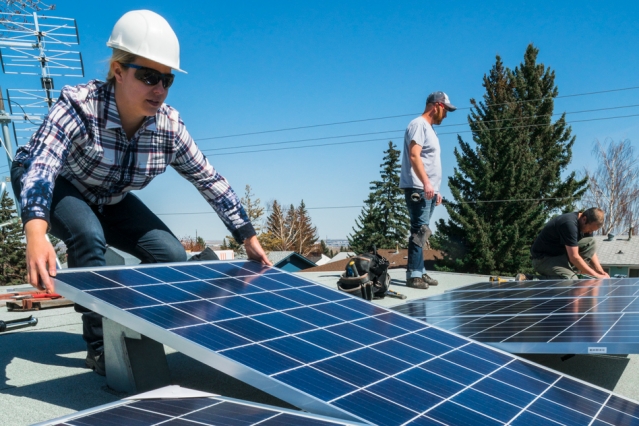 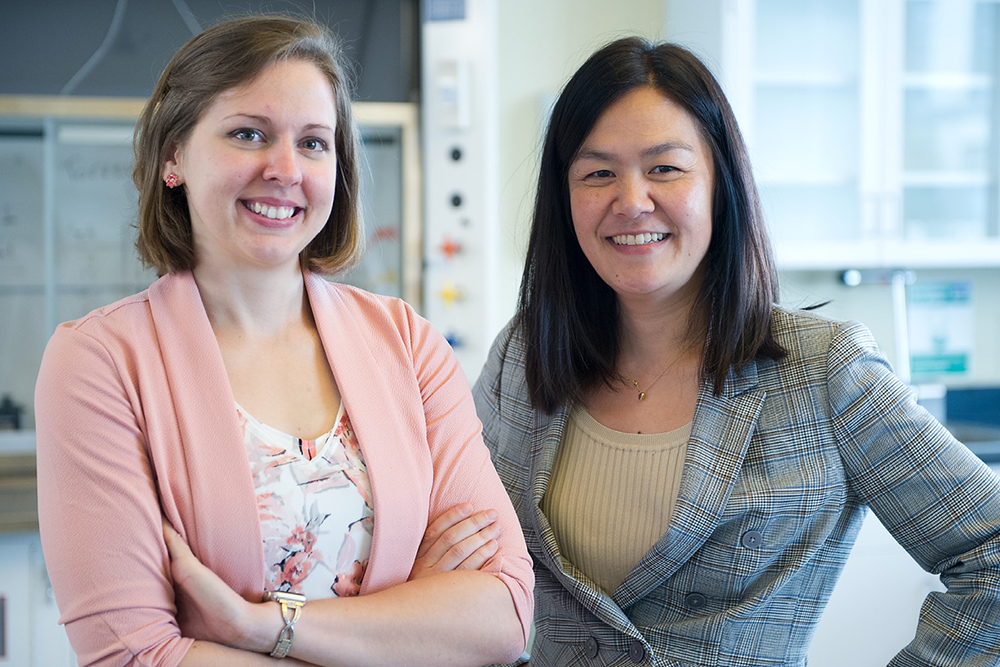 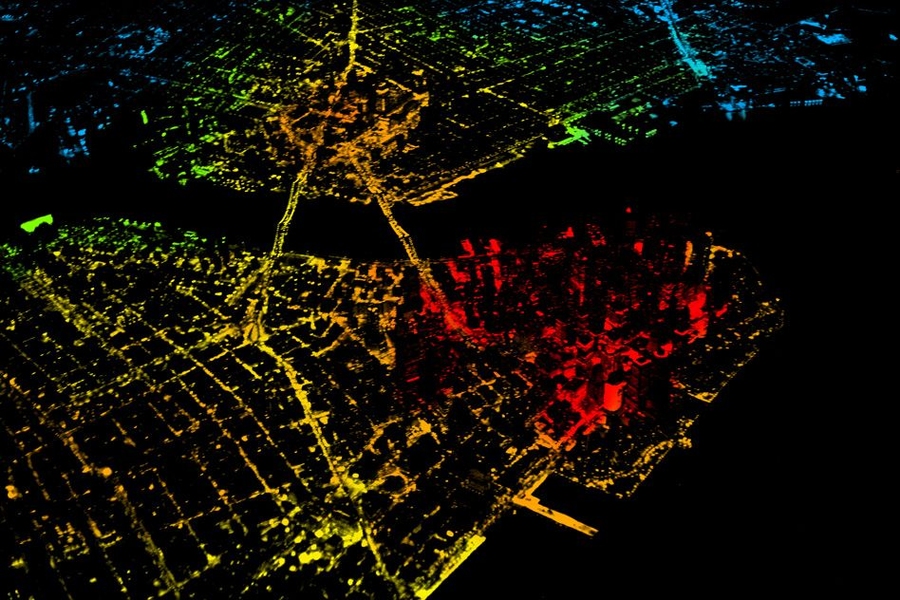 Nighttime image of New York City, with the red showing a large population density. Jessika Trancik (Institute for Data, Systems, and Society) finds that the adoption potential of electric vehicles is similar across cities, from dense urban areas like New York, to sprawling cities like Houston, which challenges the notion that affordable electric vehicles “only really work in dense urban centers.” Credit: Flickr user Doc Searles/CC BY 2.0 (edited by the researchers)

MIT researchers investigate six mathematical representations to evaluate the potential added value of a battery in an energy system that pairs battery storage with an offshore wind farm. Credit: Morning Brew on Unsplash 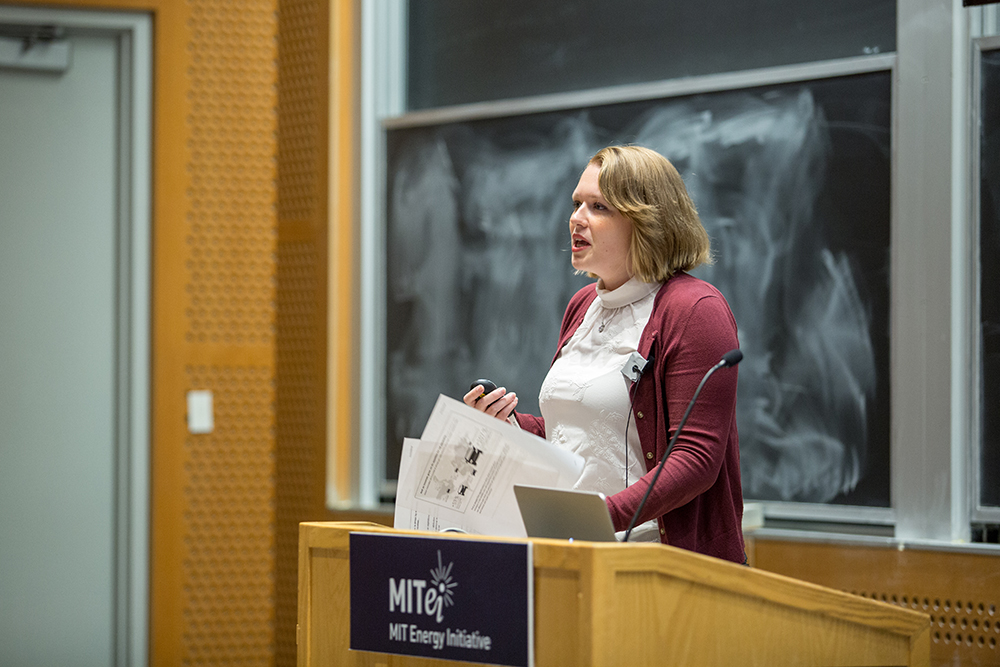 MITEI’s Joanna Moody shares results from MIT’s multi-year Mobility of the Future study during a launch event at MIT in November 2019. Her talk centered on the outlook for vehicle ownership, with a focus on consumer adoption of new mobility technologies and services. Credit: Kelley Travers, MITEI 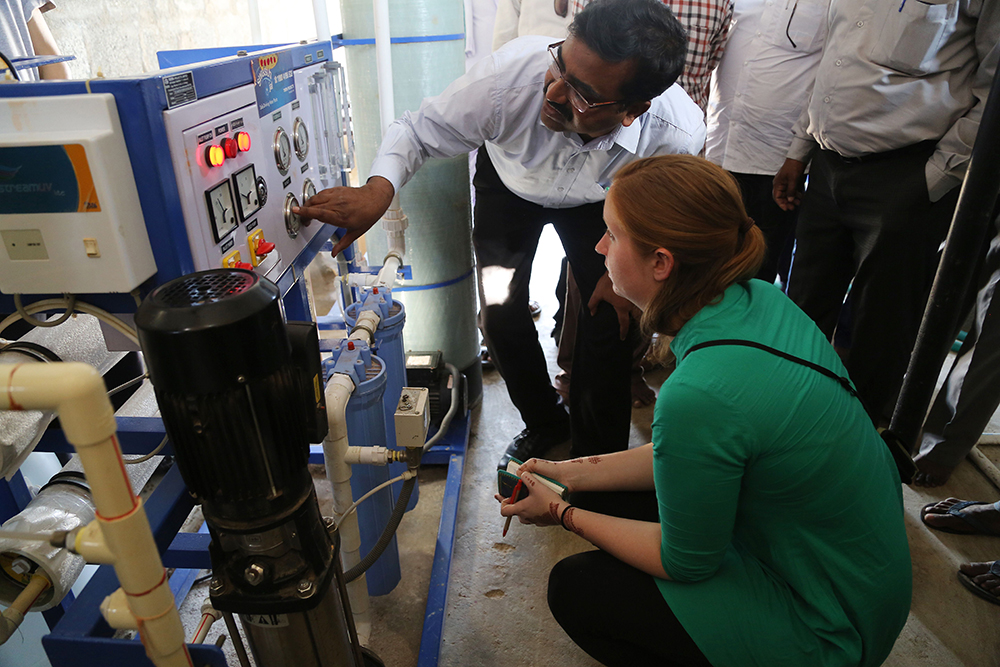 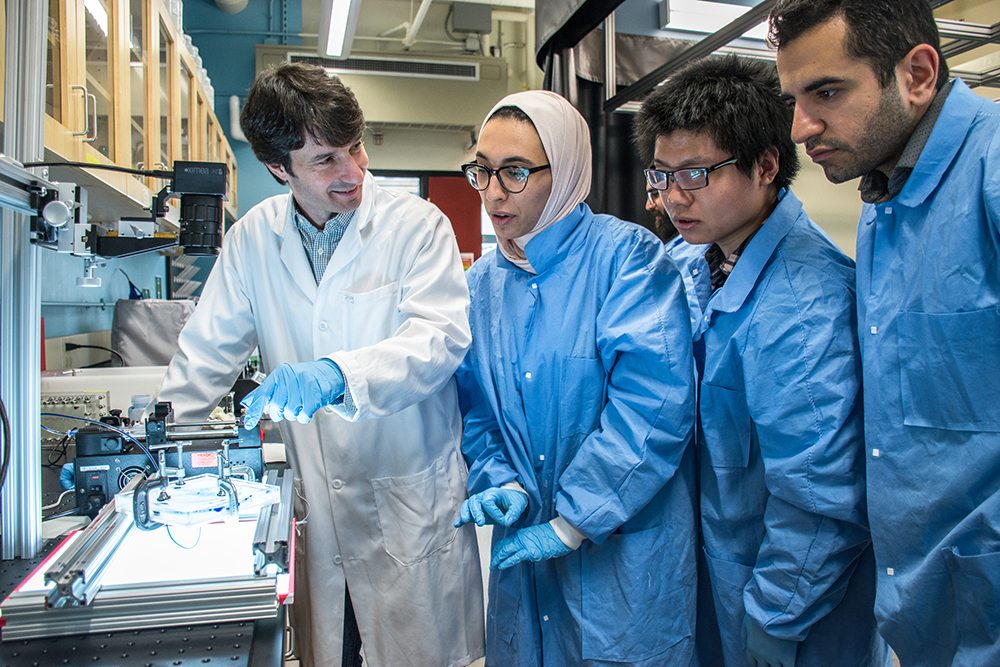 Associate Professor Ruben Juanes (left) and students (l-r) Lubna Barghouty, Yunteng Cao, and Ehsan Haghighat discuss the impact of wettability on the patterns of fluid invasion into a porous microfluidic chip, illuminated from below and recorded with a high-speed camera from above. The course, 1.079 (Rock-on-a-Chip), is dedicated to exploring multiphase flow in porous media, and is offered as an elective for the energy studies minor. Credit: Kelley Travers, MITEI

MITEI’s education program has undergone significant expansions in its offerings for undergraduates as well as graduate students and postdocs since the launch of the climate plan; here is a sample of activities and programs in this timeframe: 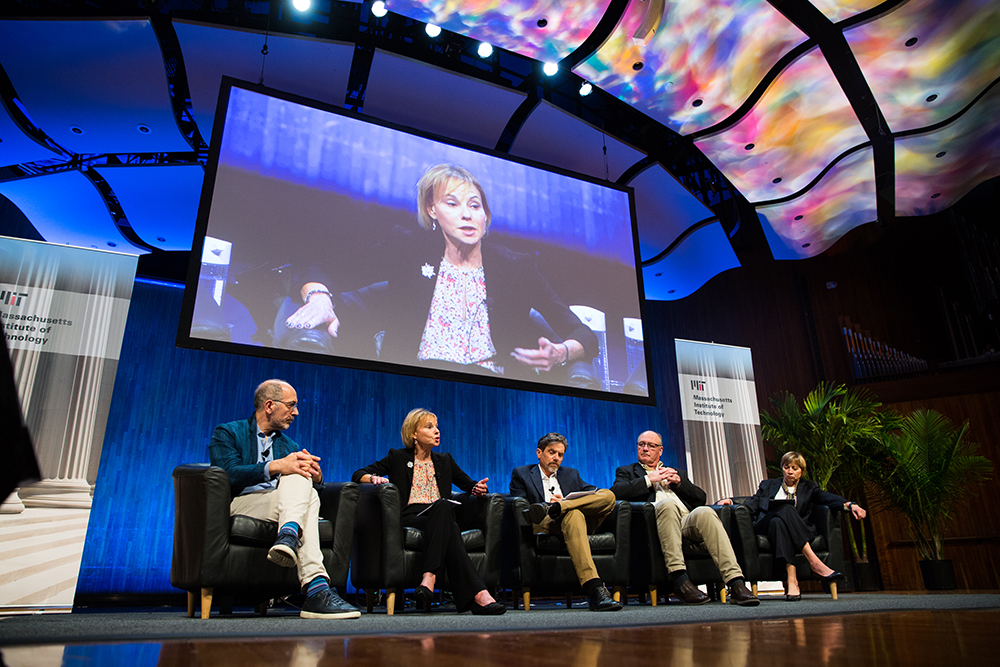 A panel on climate risks chaired by MIT Vice President for Research Maria Zuber (right), included (from left) Jerry Mitrovica of Harvard University, Sherri Goodman of the Wilson Center, Philip Duffy of the Woods Hole Research Center, and John Reilly of MIT’s Joint Program on the Science and Policy of Global Change. The panel was part of the first symposium in MIT’s 2019-2020 Climate Action Symposia series. Credit: Jake Belcher

Since its inception, MITEI has been connecting the MIT community with policy makers, scientific experts from other institutions, industry leaders, and the general public on topics relating to climate change. Faculty members proactively write opinion pieces, field and respond to frequent media requests for expert commentary, and testify before committees of Congress regarding climate science, the need for a transition to a low-carbon future, and possible solutions for achieving the needed change. Here are some of the activities MITEI has led or participated in since the launch of the climate plan: