The MIT Energy Initiative (MITEI) 2019 Annual Research Conference, held in November 2019, emphasized the dire urgency of the climate crisis; the importance of an intersectoral and collaborative approach to decarbonization; and the role of economics and policy in combatting global temperature rise.

“We certainly have a fire lit under us, so to speak, in trying to meet this challenge,” said MITEI Director Robert Armstrong in his opening remarks. “This is a problem that requires all of us to bring our specialties and disciplines to the table to address climate change and energy demands.”

Armstrong noted that in May 2019, the atmosphere’s CO2 content surpassed 415 parts per million, and that by 2037, that figure is projected to hit 450 parts per million—the amount associated with the Paris Agreement goal of limiting global temperature rise to 2 degrees Celsius or less. He said this increase is indicative of the great challenges we face, and these 18 years are “certainly not very long on the timescale of energy transitions”—our window to develop and implement climate change solutions on a large scale is quickly closing.

The three-day conference and workshop program wove together panels on topics including engagement with industry and government, energy at scale, integrating renewables into the grid, and decarbonizing the built environment and industry to illustrate how academia, industry, and policymakers can bring their unique perspectives and capabilities to bear on achieving a safer future for the planet. MITEI Director Robert Armstrong describes the pressing need for people from all energy sectors to bring together their skills to address climate change.

During a panel discussion titled “Engagement: A lever of decarbonization,” speakers explored how government, scientists, and industry can interact to mitigate climate change and promote immediacy around the issue.

“Industry provides a very different perspective to academics—in terms of timeline, in terms of urgency, in terms of scale,” said Yueh-Lin (Lynn) Loo, the director of the Andlinger Center for Energy and the Environment at Princeton University.

Loo shared some of the different types of engagement between the Andlinger Center and industry collaborators, from their corporate affiliate program to their work with state and federal governments, and an executive education module in collaboration with the World Economic Forum. She also cited the center’s full-time visiting fellows program, which brings in outside practitioners to enrich the Princeton community.

Dennis Whyte, the director of the Plasma Science and Fusion Center at MIT, and Massimiliano Pieri, the clean-tech director at Eni Next, added that a major reason for academia and industry to work together is for both sides to learn from each other in order to find innovative solutions to their common problems and to push those solutions forward faster.

They gave the example of Commonwealth Fusion Systems (CFS), a startup spun out of MIT’s fusion research, which is funded in large part by Eni, a MITEI founding member. When forming the MIT-CFS research agreement, the MIT and CFS teams forged a novel relationship around intellectual property and joint research to minimize the delays in technology transfer. CFS is a private enterprise, which allows it to manage its technology development and commercialization through a set of aggressive stage gates. Lynn Loo, director of the Andlinger Center for Energy and the Environment at Princeton University, discusses engagement as a lever of decarbonization.

Renewables in the grid

Several speakers reflected on the outlook for renewable energy sources in the coming years, offering insights from policy, economics, and “boots on the ground” work in developing nations.

Jessika Trancik, an associate professor of data, systems, and society at MIT, shared findings from her research into the cost of energy storage and its role in making renewables a viable solution to meet energy needs as we work to decarbonize the electricity sector. “Energy storage technologies are in some ways more diverse than the energy conversion technologies that we have,” said Trancik.

“If you bring the storage energy capacity cost to $20 per kilowatt-hour, you are able to provide electricity [sourced from renewables] 100% of the time at a cost that is competitive with other sources,” Trancik said. “We’re closer today to $200 per kilowatt-hour, so that would be a pretty dramatic decline.”

Melanie Kenderdine, a principal of the Energy Futures Initiative and former director of the Office of Energy Policy at the U.S. Department of Energy, emphasized the need to take regional solutions into account as a vital part of the future of energy. She noted that energy sources and economic factors vary greatly within the United States and around the globe.

“What that suggests to me is that deep decarbonization is going to have very different solutions in regions of the country and world,” said Kenderdine. “Rural solutions in Africa are going to be very different from urban solutions. Africa will be adding four cities of 10 million people or more by 2030. These cities will need electricity.”

Improving efficiency of the built environment

Among the conference’s recurring themes was the need for greater efficiency and more conservation-minded thinking in the built environment.

“I think we’ve forgotten about conservation and about how many things we could be doing mechanically that we are using electricity to do,” Kenderdine said during the panel on engagement. “I’m reminded of it every time I use an electric paper towel dispenser.”

Caitlin Mueller, an associate professor in MIT’s Departments of Architecture and Civil and Environmental Engineering, echoed the call for rethinking efficiency in a session on decarbonizing buildings. She observed that today’s environmental concerns demand that performance play a large role in building design, rather than simply a focus on appearance.

“Even though embodied carbon is small, relative to operational energy today, there’s vast variation in how we’re using embodied carbon because it just hasn’t been a topic in design for a long time,” Mueller said. “I argue that today, we really must think about embodied carbon in design, because we can’t afford to be this wasteful anymore.”

Mueller also explained that geometric patterns that look non-standard can often be more efficient, and that it’s important to balance a building’s embodied energy (primarily in materials) with its operational energy. The practice of taking organic materials and making them into standard shapes produces waste, she said, and there are often greener opportunities to use building materials in shapes found in nature. She presented several examples of modeling work she and her team have done that has led to the creation of these less carbon-intensive, more organically shaped structures.

Mark Goulthorpe, a professor of architecture at MIT, described the possibilities that digitalization and automation present to the building field. He shared a vision for a world in which anyone can use software to design and construct a home at low cost and high efficiency. Melanie Kenderdine, a principal of the Energy Futures Initiative and former director of the Office of Energy Policy at the U.S. Department of Energy, emphasizes the need to take regional solutions into account as a vital part of the future of energy.

The need for interaction among academic researchers, industry leaders, and policymakers in order to solve the tremendous challenges of climate change reverberated throughout the conference. Erin Smith, a master’s student at MIT’s Institute for Data, Systems, and Society, and a research assistant at the MIT Joint Program on the Science and Policy of Global Change, discussed the role of economics and policy during a panel discussion titled “Energy at Scale.”

“Government and business play a crucial role in scaling up new technologies,” Smith said, adding that government cooperation with industry is an effective method of keeping up climate-friendly policy momentum. “To achieve our climate goals is going to require a massive investment in and buildup of our infrastructure.”

The panel on engagement emphasized the variability in scaling different projects, and that economic analysis takes time to get right.

“Fusion technologies and systems have to be driven by economic competitiveness. We can’t just wish these things into being,” Whyte said. On the topic of scale, he mentioned that while his mission is to achieve a single fusion device that makes net energy, that wouldn’t necessarily make a difference in climate change until about 2,000 devices are created.

“Making 2,000 of those is past what I can do, what MIT can do, what academics can do,” Whyte said, adding that industry “knows what it takes to deliver at that scale because that’s what they do.”

Smith’s economics and policy research has focused on scaling carbon capture and sequestration (CCS) technology. “To have these CCS projects be at the scale we need, project developers need to have a level of investment certainty based on the policy levers that are being used to advance these technologies.”

Hydrogen fuel is another pathway to decarbonization that will rely on support from both policy and industry to scale up. Dharik Mallapragada, a MITEI research scientist, moderated a panel titled “Hydrogen: This time is different,” to discuss the future of hydrogen in the global energy system. This discussion followed a symposium MITEI held in spring 2019 on the resurgence of global interest in hydrogen and the ways it could be employed as part of a low-carbon future.

Several speakers, including Whyte, echoed Armstrong’s opening sentiment of having a “fire lit under us” in the race to mitigate climate change. It’s this underlying sense of urgency that drives the work of MITEI’s research team, affiliated MIT faculty, and members in developing and sharing the tools and technologies that will aid the low-carbon transition.

“I wake up every morning, and the first thing I worry about is we’re not going fast enough,” Whyte said. “It really feels like a race to me—we need to get going now, across the board.” 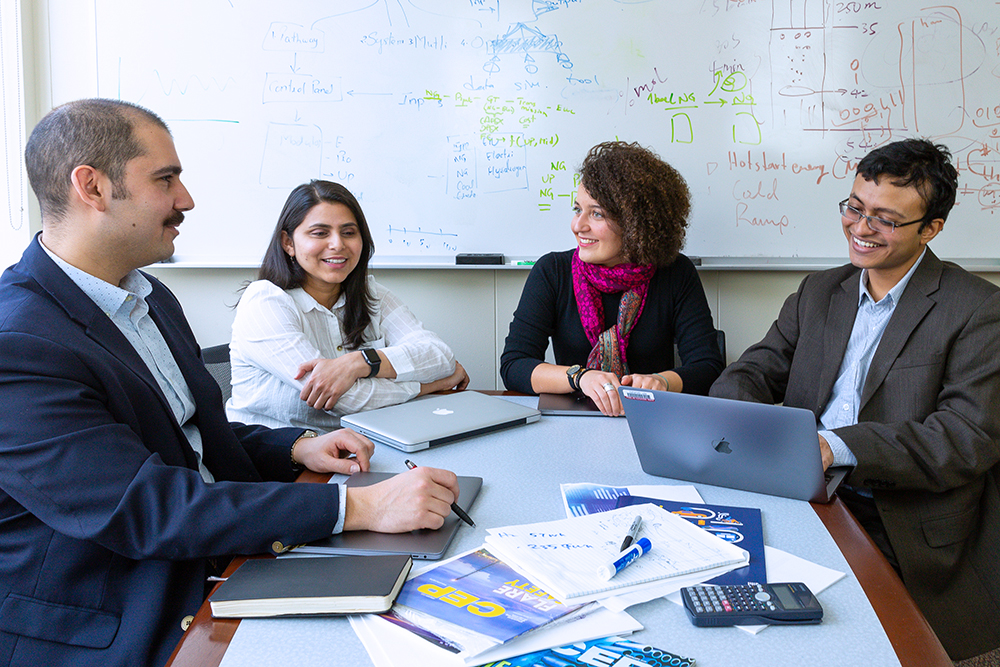