At this year’s United Nations Climate Change Conference (COP23), delegates from around the world worked on strategies to accelerate progress toward the goals of the 2015 Paris Agreement — with or without the continued official involvement of the United States. In Bonn, Germany, as negotiators worked to find common ground, MIT researchers from different technology and social science backgrounds shared their ideas for climate action.

Delivered at various side events, their messages to delegates and other climate stakeholders from around the world converged on several key elements that could enhance chances of successful climate policy implementation, including: empowering people and governments by facilitating access to open-source tools and strategies; integrating fairness and transparency into negotiations; and cultivating a deep understanding of the needs and priorities of the other side, to achieve mutual gains that benefit the climate, environment, and each side’s economy.

Michael Mehling, deputy director of MIT’s Center for Energy and Environmental Policy Research, discussed cross-border climate collaboration for mutual gains at a side event on the role of trade policy in aiding implementation of the Paris Agreement, held by Climate Strategies, a network of researchers, and the German Development Institute. Drawing on his own research, which includes work with Climate Strategies, Mehling pointed out the “growing heterogeneity of climate action, ambition, and differences across countries” — the widening gap between the most and least ambitious countries in terms of commitment to reducing greenhouse gas emissions, as cause for concern.

Mehling and his colleagues have found that border carbon adjustments — measures applied to imports and/or exports — can be effective in evening out climate efforts, but can also be “enormously controversial.” Citing a policy report he co-authored, Mehling outlined steps to design a border carbon adjustment policy to ensure fairness and transparency, such as applying any revenues generated toward furthering the country’s environmental objectives and benefiting developing countries affected by the measure.

“To facilitate continued growth of ambition and domestic climate policies in those countries or those jurisdictions that do want to move faster, this may become a useful tool to allow them to do so without domestic political backlash,” he said. Bruno Verdini, a lecturer in urban studies and planning, describes natural resource negotiation strategies for mutual gains at a COP23 side event.

Negotiation strategies that foster mutual gains are also at the heart of Bruno Verdini’s research. At side events in Bonn, he shared the importance of implementing steps that facilitate collaboration between stakeholders with different values and priorities to proactively deal with climate risks.

Verdini, a lecturer in urban planning and negotiation and the executive director of the MIT-Harvard Mexico Negotiation Program, contrasted moves that are common in disputes in the public arena but are frequently detrimental to implementable outcomes, such as making threats or extreme demands, with techniques that empower both sides to address core concerns and cooperate effectively.

He said, “As a negotiator, you owe your organization and the people you represent a significant amount of preparation to test your assumptions, identify blind spots, and account for multiple scenarios.” Verdini continued, “You want to foster a dynamic of reciprocity, so that when stakeholders sit at the table, you show that you’ve done the work to put yourself in their shoes and develop persuasive opportunities that allocate benefits instead of solely costs — and in turn claim your fair share.”

He has expanded on these ideas in a new book, “Winning Together: The Natural Resource Negotiation Playbook” (MIT Press, 2017).

Verdini gave a recent example of joint resource management between the U.S. and Mexico that has yielded positive results. During the current drought affecting much of the Colorado River Basin, the metropolitan water agencies in Nevada, Arizona, and California realized that many of the canals across the Mexican border were not lined with concrete, which meant a significant portion of the water annually delivered to Mexico was being lost to seepage. By financing infrastructure improvements on the Mexican side, the U.S. could, in effect, “create new water,” and Mexico could trade a portion of this “excess” water back to the U.S. at a less expensive rate than it would cost the U.S. to buy water rights north of the border.

“At MIT, we focus on empowering our undergraduates to thrive in any industry through a mutual gains approach to negotiation,” Verdini said. In his popular negotiation class, students hone their leadership skills through weekly role-play simulations, several of which center on energy, water, and environmental management. University of Bonn students participate in the World Climate role-play.

John Sterman, a professor of management at the MIT Sloan School of Management, has also long recognized the power of role-play in experiencing another’s perspective on climate issues. Speaking at a side event, he shared research on the effectiveness of the World Climate role-play, developed with colleagues at the not-for-profit organization Climate Interactive.

“Research shows that showing people research doesn’t work,” Sterman said. Instead, World Climate participants experience the challenges faced by developing and developed nations firsthand. Taking on the roles of nations different from their own, they negotiate solutions where all parties commit to keeping global temperature rise under 2 degrees Celsius by contributing their fair share to greenhouse gas reductions, using a climate modeling tool to test the impacts of their decisions.

Preliminary findings indicate that World Climate — which has reached more than 35,000 participants in 75 countries — is more impactful than traditional lectures, and is effective with liberal and conservative participants alike. Sterman noted that the simulation “produces large gains not only in knowledge of climate change, but also in people’s sense of urgency and the belief that they can make a difference. It’s the emotional impact of the experience that drives their desire to learn more and their intent to act in the real world.”

During COP23, Sterman and colleagues held World Climate sessions at the University of Bonn and other venues around the city.

At an event organized by a group of U.S. business, nonprofit, and philanthropic leaders, Jessika Trancik, an associate professor in energy systems at MIT’s Institute for Data, Systems, and Society (IDSS), discussed how research can be used to empower individuals to make economically and environmentally beneficial choices. She gave an example of research her team has conducted that compares popular personal vehicles in terms of their carbon emissions, which the team has released in an app for the public called “Carboncounter.”

“What you see is that you don’t actually have to pay more for a low-carbon-emitting vehicle today. You can save money and save emissions by going for an electric car, for example,” she said, adding that public policies can spur a “virtuous cycle” of technological improvements that in turn lead to cost reductions and increased performance, which in this case could extend vehicle range and meet climate targets.

Trancik spoke about the roles researchers can play in continuing to move the U.S. toward emissions reductions and informed climate policy — helping to ensure that in an era of limited federal funding, time and money are invested wisely in policies that research has shown to be effective.

“We need to spend time together as researchers, as policymakers, as people in the private sector, in order to identify important questions and make sure that this research is useful to policymakers and also that it reaches them,” she said.

“We’re specifically interested in how universities can support this process through academic research and on-campus demonstration projects,” said Klemun.

Likewise, MIT Climate CoLab researchers work to bring together citizens and governments to develop and evaluate effective climate action solutions, “harnessing the collective intelligence of thousands of people all over the world at a scale and with a degree of collaboration that was never possible before,” said Thomas Malone, director of the MIT Center for Collective Intelligence (CCI), at a side event on how subnational actors in Latin America and the Caribbean could advance climate goals.

Malone, who is also a professor of management at MIT Sloan, described a crowd-sourcing initiative under development, the Climate Plan Accelerator: “an online network that can help governments at all levels and other organizations develop detailed, expert-validated plans for how to achieve or exceed their climate action goals.” Malone was joined in Bonn by CCI colleagues Laur Hesse Fisher, the Climate CoLab project manager, and Kathleen Kennedy, director of special initiatives.

Another side event convened more than 100 developers from around the world for a hackathon to develop blockchain-based climate solutions. MIT COP23 representatives (l-r) Michael Casey of MIT Sloan, undergraduate student Erick Pinos, and graduate student Stephen Lee convene at the riverboat where the “Hack for Climate” side event was held. The hackathon brought together developers to explore blockchain and other digital ledger technologies for climate solutions.

“We are working on how blockchain technologies can play an enabling role to resolve the trust problem — one of the core fundamental barriers to how we confront the climate change challenges that the world is facing,” said Michael Casey, a senior lecturer at MIT Sloan and senior advisor for the Digital Currency Initiative at the MIT Media Lab. Casey, one of the organizers of the Hack for Climate side event, explained how these technologies could aid climate mitigation, adaptation, and finance efforts by allowing storage and sharing of information and data through a secure, trusted mechanism.

“I’m here as part of my undergraduate research into how we can use blockchain to make decentralized community solar microgrids in a localized community of the Caribbean islands,” said Pinos, who is studying management and computer science and is president of the MIT Bitcoin Club.

Lee, a master’s student in the Technology and Policy Program and in electrical engineering and computer science, is researching energy access planning in the developing world through the Tata Center for Technology and Design’s Universal Access Lab.

“We’re looking at how blockchain technologies can finance some of these energy projects,” he said.

John Fernández, a professor of building technology and director of the MIT Environmental Solutions Initiative, was also in Bonn to explore opportunities for collaboration — especially around nature-based solutions, a major focus of the initiative.

“I spent time discussing strategies with a number of organizations focused on protecting and enhancing natural systems and their capacity for mitigating emissions and helping with the consequences of sea level rise, extreme weather, heat waves, and other coming challenges,” he said.

“As countries continue the complicated work of implementing the Paris Agreement, and as cities, regions, businesses, and universities step up their efforts to support the agreement’s goals, it was heartening to see such an impressive delegation from MIT in Bonn,” Kiley said. “By learning from other delegates, and by contributing new tools, ideas, and research insights to the conversations, MIT’s delegation demonstrated what we mean when we say that we want to take what we’re learning here and apply it to help make a better world.” 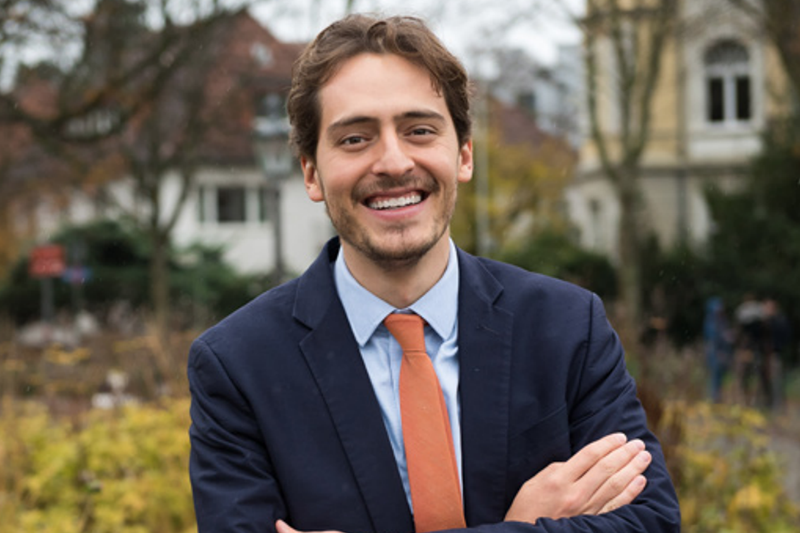 3Q: “Winning together” in natural resources negotiation and leadership