An assessment of Tesla's Powerwall

Tesla Corporation launched its latest product at the end of April in Los Angeles with much fanfare and a promise to change the future. Powerwall is a home battery that charges using electricity generated from solar panels and stores that power for use in the evening. The battery also is meant to insure against power outages by providing a backup electricity supply, and, Tesla says, it offers independence from the utility grid and the security of an emergency backup. But is this new battery really all that revolutionary?

In one sense, Tesla’s Powerwall transforms the battery from a storage device historically concealed as much as possible to a device proudly displayed on the wall of one’s home. It is this transformation that has captured consumer interest, or at least the attention of early adopters – Powerwall batteries are now sold out through mid 2016.

While design, ease of use, and marketing clearly are critical drivers for technology adoption, the cost to the consumer, as well as manufacturing costs, are key to further wide-scale adoption. So, let’s really examine how the Powerwall compares with other Li-ion battery pack designs, in particular with regard to manufacturing cost.

Li-ion battery manufacturing costs vary significantly with individual cell design and the manner in which the cells are assembled into a “pack.”

The power-to-energy (P/E) ratio is a critical aspect of the design with a direct impact on the specific manufacturing cost ($ per kWh). This dependence is shown in Figure 1, an adapted version of Sakti et al.’s techno-economic model, which plots the specific manufacturing cost of Li-ion batteries as a function of their P/E ratio for different electric vehicle (EV) applications.

What you really need to know is this – battery packs with higher P/E ratios, such as those used in plug-in hybrid electric vehicles (PHEVs) — have less storage capacity (Wh) over which to distribute peak power demand (W), and hence require thinner electrodes to deliver higher power.

By comparison, battery electric vehicles (BEVs) such as a BEV200 (BEV with a 200-mile all-electric range) have a larger battery pack over which to distribute power requirements, and hence need a lower P/E ratio.

Thinner electrode cells, while enabling higher power outputs, are more expensive on a per kWh basis due to higher costs associated with the inactive materials, such as separators and current collectors.  This results in higher specific manufacturing costs for PHEV batteries, as illustrated in the accompanying figure. 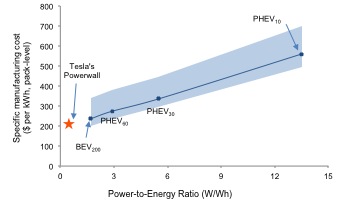 Figure 1: Specific pack cost as a function of the power-to-energy ratio of the Li-ion battery pack for a battery electric vehicle with a 200-mile all-electric range (BEV200) and for plug-in electric vehicles (PHEVs) of 10-, 30-, and 60-mile all-electric ranges (PHEV10, PHEV30, and PHEV60) based on prior work by Sakti et al. The asterisk indicates the region of the power-to-energy ratios of Tesla’s Powerwall batteries. The authors used prismatic pouch cells in their study, while Tesla uses cylindrical 18650 cells. However, the relationship between the manufacturing-cost as a function of the P/E ratio is not expected to change much. A sensitivity analysis around the base case resulted in the blue band (For additional details see Sakti et al. 2015)

Tesla’s 7 kWh Powerwall battery pack model has a maximum P/E ratio of ~0.5 (W/Wh), with a peak power of 3.3 kW. So, mapping this P/E ratio onto Sakti et al.’s model projects that Tesla’s battery pack manufacturing costs are about $200 per kWh. By comparison, in 2014, industry-wide cost estimates of Li-ion batteries at the pack-level were about $410 per kWh.

For market-leading BEV manufacturers, such as Tesla, which uses Panasonic-made cells, these pack-level costs were estimated at about $300 per kWh. Given that the estimated manufacturing cost of $200 per kWh does not account for profit margin, or other cost components, such as a warranty that Tesla may be paying Panasonic, the $300 per kWh value seems fairly consistent with the established market.

Tesla’s announced battery cost to the consumer is $430 per kWh for the 7 kWh pack and $350 per kWh for the 10 kWh pack, so it’s logical to surmise the batteries cost Tesla $300 per kWh, which gives the company a window of between $50-130 per kWh to account for any additional costs and a profit margin.

Prior interviews involving 12 leading experts and consultants from the battery manufacturing and automotive industries projected manufacturing costs for BEV battery packs between $330 and $750 per kWh by 2018.

The good news?  Recent modeling has indicated that the cost to consumers of BEV batteries can be lowered to about $170 per kWh at high manufacturing volumes.  While Tesla’s cost numbers now seem lower than others in the market, they are well within the range projected by industry. So, what does this ultimately mean for the consumer?

The Powerwall already is being called the “’iPad’ of energy storage” given that it has the potential to make batteries for homeowners—a product already existing in the market—a more fashionable possession. But while the cost to consumers is lower than current industry-wide numbers, the truth is that this cost may more than double when one accounts for the total system and other installation-associated costs required to make it all work.

In instances where no additional interconnections or inverters are required – as in the case of homes with existing PV installations – consumers may avoid much of this added expense, which makes the product much more attractive.

Interestingly, Tesla is currently building a Li-ion battery manufacturing facility, named Gigafactory, with an annual output capability greater than the 2013 global supply of Li-ion batteries. The Gigafactory is projected to reduce costs by as much as 30%, thanks to greater economies of scale, manufacturing, and further process improvements. Should these plans materialize, such reductions may further drive down the costs to consumers, presumably increasing adoption rates.

The bottom line is that although the technology itself is not revolutionary, with this new line of battery products, Tesla has astutely diversified and made an entry into the market for residential and industrial energy storage solutions at an increasingly affordable cost – and that means it’s a win for future sustainability.

Apurba Sakti is a postdoctoral associate in the Department of Chemical Engineering and the Energy Initiative, at MIT where he investigates techno-economic aspects of energy storage.

Raanan Miller is an assoc. director of the MIT Energy Initiative, and a principal investigator in the areas of energy storage and innovation.

Fikile Brushett is an Asst. Professor in the Department of Chemical Engineering where he holds the Raymond A. (1921) and Helen E. St. Laurent Career Development Chair, and focuses on the science and engineering of advanced electrochemical systems for energy storage and conversion. 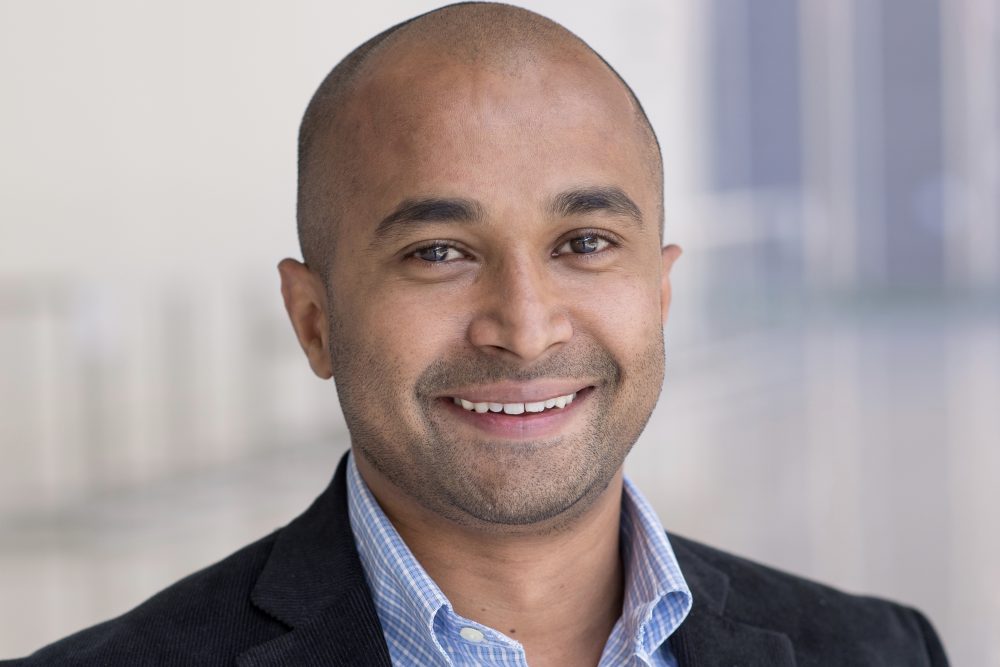