Low-cost, high-capacity, rechargeable battery could one day enable widespread adoption of intermittent energy sources such as solar and wind

An MIT team has performed the first small-scale demonstrations of a new battery that could one day provide critical low-cost energy storage for solar and wind installations, microgrids, portable power systems, and more. The battery uses bromine—an inexpensive, abundant element—combined with hydrogen. Inside the battery, the reactants are kept apart not by the usual expensive, vulnerable membrane but rather by natural processes whereby rapidly moving streams of liquid flow side by side without mixing. And the products that exit can be fed back in along with electricity to recover the original reactants, recharging the battery. Already the system generates up to three times more power per square centimeter than other “membrane-less” systems can. Redesigns now under way promise even higher performance from this novel battery.

The availability of low-cost, high-capacity energy storage technology could profoundly change today’s energy landscape. The ability to store electricity when supplies are abundant and deliver it later when they’re not would permit widespread use of intermittent sources such as solar and wind; would ensure efficient, reliable power delivery by both central and distributed grids; and would make possible portable energy storage for developing nations and for mobile industrial operations. Electrochemical systems such as batteries and fuel cells seem promising candidates for the energy-storage job. They can be sited wherever they’re needed, and they can be discharged and recharged quickly and efficiently. Coupled with a solar or wind farm, for example, they could store electricity when the sun shines or the wind blows and then deliver it in minutes when the day gets cloudy or still.

But the best-performing electrochemical devices typically can’t provide large storage capacity at a reasonable cost. A truckload of lithium ion batteries, for example, can provide plenty of power, but the cost is too high. “What’s holding back the renewable technologies now is not so much needing, say, a better solar cell, but rather needing a way to store the energy cost-effectively,” says Cullen Buie, assistant professor of mechanical engineering.

In the search for large-scale electrochemical devices, much attention has focused recently on systems using hydrogen and bromine. This combination of reactants offers several attractive features. Bromine is inexpensive, readily available, and abundant compared to storage options such as lithium. Bromine is also very “electro-negative,” meaning that it really wants to pick up another electron; and hydrogen is happy to provide it. Chemical reaction between them therefore occurs extremely rapidly—much faster than the hydrogen-oxygen reaction in most high-capacity electrochemical devices such as fuel cells—and large amounts of current flow when the electrons are forced to move from the hydrogen to the bromine through an external circuit. But there’s a catch. If the hydrogen and bromine react spontaneously, the energy of the reaction will be wasted as heat. Electrochemical system designers generally keep them apart using an expensive membrane, but that membrane becomes damaged over time by hydrobromic acid produced inside the device. As a result, three decades of research has yielded little improvement in hydrogen bromine flow batteries.

To Buie, Martin Z. Bazant, professor of chemical engineering and of mathematics, and William Braff PhD ’14, the obvious answer was to get rid of the membrane. They’re not the first to have that idea. Membranes tend to be finicky and expensive, regardless of the chemistry involved. As a result, for the past 10 years, research groups have been designing membrane-less electrochemical systems in which the reactants are separated using fluid mechanics—specifically, the physics of laminar flow. Under the right conditions, two streams of liquid will flow in parallel, right next to one another with little or no mixing between them. However, none of the membrane-less fuel cells using various chemistries have achieved power densities as high as their membrane-based counterparts. “So this architecture was largely viewed as interesting from an academic perspective but probably not commercially viable,” says Bazant.

Four years ago, Buie and Braff—then a graduate student in mechanical engineering and now an associate at Exponent—began to explore a novel idea: combining the hydrogen bromine chemistry with the membrane-less cell architecture. “Our idea was to take these two limited technologies and put them together to get something better than what was possible with either one on its own,” says Buie. Their approach could get rid of the membrane that has limited hydrogen bromine fuel cell development, and it could replace the typical oxygen-based chemistry that has slowed performance of previous membrane-less cells.

An added bonus is the reversibility of the hydrogen bromine reaction. In most membrane-less cells, the reactants that go in and the products that come out differ. As a result, those systems are typically “once-through” fuel cells that require a continuous stream of fresh reactants. With the hydrogen bromine chemistry, the product of the reaction is the electrolyte itself. Recycling that electrolyte back into the cell—along with electricity from an external source—produces hydrogen and bromine, thereby recharging the system. It can thus operate in a “closed- loop” mode, making possible the first membrane-less rechargeable battery.

To test the feasibility of their new idea, Buie and Braff spent a year performing theoretical studies of the membrane- less hydrogen bromine system. Based on their promising results, they teamed up with Bazant to bring his modeling expertise to the project and to undertake experimental implementation of the concept.

The diagram below shows their system. At the top is a porous anode containing a small amount of platinum (Pt) catalyst. At the bottom is a solid graphite cathode. Between them flows the electrolyte—hydrobromic acid (HBr), an electrically neutral combination of negatively charged bromine and positively charged hydrogen suspended in water.

The diagram shows the cell operating in discharge mode (that is, delivering electricity). The hydrobromic acid electrolyte enters the main channel at the left and flows between the top and bottom electrodes. A water-repelling metal mesh on the bottom surface of the porous anode keeps the electrolyte from seeping in. Neutral hydrogen gas (H2)—the fuel—flows across the top, and some of it enters the porous anode. At the same time, more hydrobromic acid is fed in through a separate channel along with a small amount of neutral molecular bromine (Br2)—the oxidant longing to add an electron. The two streams flow next to each other with minimal mixing.

During recharging, the hydrobromic acid is fed back into the cell, along with electrons from an external power supply. The hydrogen ions go back to the anode, where they become molecular hydrogen, and the molecular bromine reforms at the anode. The system is now reset.

One key challenge with relying on laminar flow is keeping the reactants from reaching the “wrong” electrode. That phenomenon—known as crossover—can cause damage, especially of the costly catalyst on the anode. In the new design, the metal mesh keeps the hydrogen gas from entering the liquid electrolyte. But the bromine is an issue. Using a novel numerical model, the researchers estimated concentrations of molecular bromine at various locations inside their flow battery. The colors in the schematic diagram show their results. White indicates the highest bromine concentration. Concentrations decrease from yellow to orange, reaching zero in regions colored black.

The diagram shows that bromine is being depleted along the cathode, where it turns into hydrobromic acid. Concentrations of bromine are also decreasing next to the electrolyte—a result of its diffusion into the electrolyte stream. Given enough time, the bromine would eventually reach the anode, bringing unwanted crossover effects. However, in their design, the reactants exit the system long before that happens. “We can see that the bromine is getting nowhere near the anode,” says Buie. “That’s what we want.” 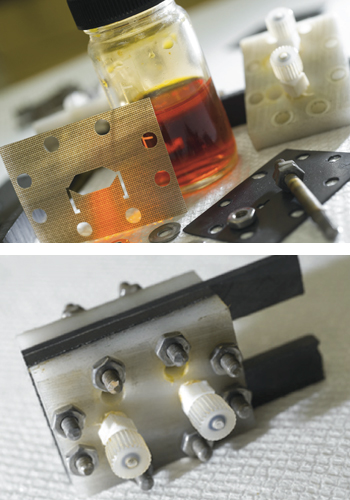 Shown above are key components of the hydrogen bromine battery, including the liquid bromine and the carbon cathode. The assembled small-scale prototype is shown below. Photo: Stuart Darsch

As a first test of the membrane-less hydrogen bromine concept, Braff designed and built a small demonstration cell shown in the photo to the left. It consists of two electrodes 0.8 mm apart, with a 1.4 cm-long flow channel between them, plus inlets that guide the reactants into the device. He then performed a series of experiments over a range of flow rates and reactant concentrations. The demonstration cell—even before being optimized— achieved a maximum power density of 795 milliwatts per square centimeter (mW/cm2) at room temperature and pressure. That performance is comparable to the best hydrogen bromine cells with a membrane, and it’s two to three times better than any previous membrane-less design using any chemistry.

The demonstration battery’s potential to recharge efficiently is likewise promising. The researchers are now testing operation in closed-loop mode, recycling the reaction products into the device for the charging cycle. But in previous work, they tested reverse operation by flowing in pure hydrobromic acid plus electricity and successfully made hydrogen and bromine, thereby recovering their starting materials. By combining results from experiments in the forward and reverse modes, they produced the diagram below, which shows round-trip voltage efficiency as a function of power density for three reactant concentrations. The highest concentration brings the greatest power density, with roundtrip voltage efficiency exceeding 90% at 200 mW/cm2—about 25% of peak power. Those early results demonstrate the potential for an efficient discharge-charge cycle at high power.

The researchers’ preliminary cost projections are also promising. In a traditional hydrogen-oxygen fuel cell with a proton exchange membrane, the catalyst and membrane together can make up as much as half of the total cost per kilowatt-hour. The new hydrogen bromine battery needs no membrane, no catalyst at the cathode, and far less catalyst at the anode. In addition, because the power density is higher in the hydrogen bromine battery, the size of the system needed to extract the power decreases, further reducing cost. “So you get dramatically lower costs—and that’s our basic motivation,” says Bazant. “We believe that our system has the potential to supply energy storage at a cost attractive to utility companies—and it may be the first system that can do that.”

Power versus round-trip efficiency in the demonstration cell 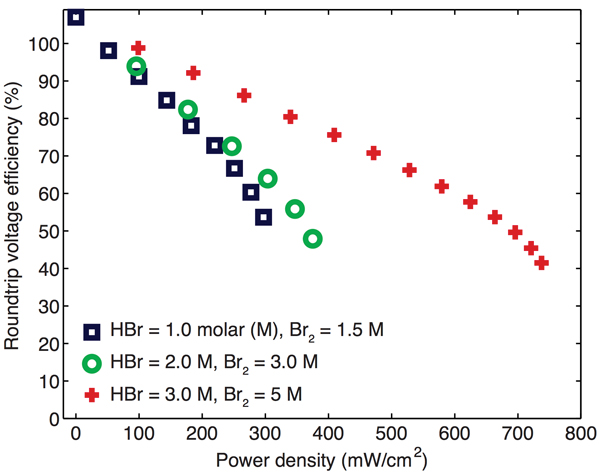 As a first test of the discharging-recharging efficiency of their battery, the researchers ran it in discharging mode and then—using fresh hydrobromic acid—in charging mode to recover the reactants. These curves show the efficiency of those processes combined as a function of power density at various concentrations of hydrobromic acid and bromine. Power density is highest at the highest concentration, and roundtrip efficiency exceeds 90% at a power density of 200 milliwatts per square centimeter.

The researchers are continuing to improve their system. For example, they’re trying to get to even higher power densities by bringing the electrodes closer together. Because all the reactions are so fast, the time it takes for the hydrogen ions to cross the stream of electrolyte—even with its high conductivity and without a membrane—is the major limitation in their system.

In addition, they’re developing a completely new cell architecture that will ensure that the electrolyte contains no molecular bromine when it’s captured and recycled during closed-loop operation. “The new design is based on the same concept, but it’s a quite different architecture,” says Bazant. “That’s where we’re really breaking new ground now….We’re moving in a direction that nobody’s gone before.” At this point, the issues with their system all involve what he calls known physics. “If it’s not performing as well as we’d like, we have predictive models that can help us redesign the shape of the channels and the speed of the flows to make it better,” he says. “It’s a solvable problem.”

This research was funded by the MIT Energy Initiative Seed Fund Program, the US Department of Defense through the National Defense Science and Engineering Graduate Fellowship Program, and the Massachusetts Clean Energy Center Catalyst Program. More information can be found in:

This article appears in the Spring 2014 issue of Energy Futures.