Date night with a soldering iron, a community fair, and meet-ups with industry experts proved irresistible draws during this winter’s Energy Independent Activities Period 2014. Sponsored by the MIT Energy Initiative (MITEI) during January and February, the Energy IAP was designed to “reach out past the typical energy community with activities open and accessible to everybody,” according to Ethan Feuer, MITEI’s student activities coordinator.

In addition to such credit-worthy classes as Delivering Energy at Scale: Science, Technology, and Sustainable Development, Energy IAP 2014 featured hands-on, student-led, interactive workshops; visits to local businesses; and informal networking events. “We believed that IAP would be a great opportunity to expand our community, and we realized we had to get out there with the kind of programs people would really want to attend,” said Feuer.

An important component of MITEI’s “big tent” approach was the first-ever competition for mini-grants to support student-run IAP activities. A class taught by graduate students on meshless approaches to computational fluid dynamics was one of the winning proposals. Another winner: a carnival complete with bike-powered smoothie makers and renewable bottle bowling, intended to bring together MIT’s many energy clubs for the first time. 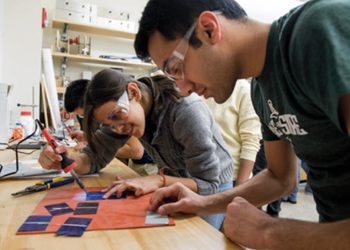 “It’s cool to do hands-on things. That’s how you really learn,” said Reese Caliman ’17, a linguistics major, attending a third mini-grant winning event: the Solar Panel Cell Phone Charger Building workshop run by Fossil-Free MIT. The prospect of manipulating tetchy soldering irons and fragile silicon cells for three evening hours did not deter the dozens of students gathered in the Lab for Engineering Materials. Huddled over his wand, Justin Miller, a fifth-year graduate student in mechanical engineering, admitted, “It was slow going at first, but now I’ve got the hang of it.” And to Mirim Yoo ’16 of electrical engineering and computer science, the reward of walking away with a “device that actually works without blowing my phone up” compensated for the difficult hands-on, electrical engineering challenge.

For Fossil-Free MIT, the event showcasing solar power provided the perfect opportunity to generate interest in sustainable energy sources. “We thought it would be fun,” said Joel Jean, a third-year graduate student in electrical engineering and a 2011–2012 Siemens-MIT Energy Fellow. “It’s also a way to get people together and thinking about climate change and renewable energy.” Some students came predisposed to do just that. “I came because I’m from Kenya, and this is really applicable there,” said Jerop Kipruto ’17. “We have a lot of sunlight, and I just want to know how to build a solar cell.”

Energy IAP 2014 also featured the forum Energy Careers Spotlight: A Day in the Life, which brought in more than 50 participants. “We took a different angle with our career panel this year,” said Christie Ko, MITEI’s assistant director for member relations. “It was more intimate, featuring more local energy companies and organizations, and it included networking opportunities for participants.”

For some of the attendees, learning in detail about the work lives of the six panelists proved eye-opening. “I was surprised by the breadth of careers in energy, from basic research and startups, to architecture, finance, and business,” said one forum participant, Chelsea Edwards ’17. “It was also exciting to see that you can get started working on energy as an undergraduate and potentially go directly to having an impact.”

Among the speakers Edwards singled out were two recent MIT graduates who minored in energy studies and now serve as key personnel at local energy startups: Martha Gross ’12 of materials science and engineering, a scientist at Ambri, the maker of liquid metal batteries, and Tim Grejtak ’10 of mechanical engineering, an engineer at the solar energy firm Sun Catalytix.

Typical startup workdays often proceed at a relentless pace, Gross cautioned her listeners, but, she said, “I am constantly working on stuff I’m interested in.” Grejtak counseled would-be entrepreneurs to “be loud. If anybody asks for something to do in a lab, even if you don’t know what you’re doing, pipe up. And don’t be worried about it going right the first time, since it rarely does.”

These nitty-gritty accounts were a revelation for Sayalee Mahajan, fourth- year graduate student focused on thermoelectric systems: “I didn’t have any idea of what startups do. It was the first time I explicitly saw what people who work there do every day and what kind of challenges they face.”

One theme that emerged during the panel was the importance of seizing opportunities. Panelist Drew Cameron ’10 of chemical and biological engineering, now a senior quantitative risk analyst for Constellation Energy, found his way into the energy industry while an undergraduate through a series of internships at Exelon. Harvey Michaels, a lecturer in the Department of Urban Studies and Planning, discussed the best way to take advantage of the new and expanding “opportunity space” of energy efficiency: “Show some leadership,” he advised, and make a compelling elevator pitch “about something that could be different from the way it is now.”

One panelist recounted to rapt listeners how her career nearly foundered on self-doubt. Michele Ostraat, research center leader at Aramco Services Company, confided that 15 years ago she would have found it “physically impossible to get up and speak in front of this room.” She was so terrified of flying that she “could not get on a plane.” Determined to shed these “serious career inhibitors,” Ostraat placed herself “in positions I knew would make me uncomfortable” and eventually learned to conquer her fears. Ostraat also described the potentially stifling influence of colleagues on her professional journey. At one point she had to insist on being considered for a coveted assignment in Saudi Arabia, in the face of her managers’ belief she would feel uncomfortable there as a woman. “Follow your passion,” she counseled, “and do not let other people make career assumptions for you.”

Audience members found encouragement in Ostraat’s anecdotes and in her career, which, like other panelists’, altered trajectory a number of times. “You actually have chemical engineers working in mechanical engineering, or mechanical engineering students working in biology,” said Kristian Fennessy, candidate for a BSA in building technology. “As an architecture major, which is kind of a small field with lots of competition to get jobs, it’s good to know I can apply to jobs outside my field and find a footing, a passion, that I’m really interested in.”

Other forum participants drew additional takeaways. “The most interesting thing I learned today was that … you have to have a certain flexibility and willingness to go into other fields—and not just dabble in them but become good at them,” Fiona Grant ’17 commented. “I’m a freshman; I’m thinking materials science,” added Victoria Petrova ’17. “I realized it doesn’t really matter what major you are, you can still go into whatever you want. There are a million different paths to pursue in energy.”

At this event, Michele Ostraat made several connections with strong MIT candidates for internships and full-time positions. As a result, Timothy Kucharski—then an MIT postdoctoral research associate—joined her team on April 23, 2014, as a research scientist with Aramco Research Center–Boston, part of Aramco Services Company, a Founding Member of MITEI.