India is facing a housing crisis of epic proportions, with an estimated 700–900 million square meters of new residential space required annually to accommodate its burgeoning population. In many cities, housing needs are being met by slum dwellings, but MIT researchers are working to provide a better solution—one that is energy-efficient, environmentally sustainable, and ultimately safer for low-income residents.

Under the aegis of MIT’s Tata Center for Technology and Design, three faculty members from the Department of Architecture have teamed up with an Indian nonprofit to work on a Rajiv Awas Yojana Slum-Free City Plan of Action for Bhuj, a city in Gujarat that suffered major housing losses during the earthquake of 2001.

Working to create not only a plan for the city but also a model for cities worldwide, the researchers—with the help of well over a dozen MIT graduate students and postdocs—are employing a three-pronged strategy for development that includes new designs for safer, more sustainable neighborhoods, buildings, and construction materials.

“To solve the problem of housing at the scale that India and the world needs, solutions don’t live in one discipline,” says Tata researcher John Ochsendorf, a professor of architecture and of civil and environmental engineering. “To really move the world forward, we need solutions that solve multiple problems simultaneously.”

Assistant Professor of Architecture Miho Mazereeuw is leading the effort to examine Bhuj’s needs at the neighborhood level. Partnering with the Hunnarshala Foundation, a nongovernmental organization with strong community ties, Mazereeuw’s team interviewed residents from numerous slums and conducted 52 in-depth studies of existing housing. In the process, they discovered that slums actually have an advantage over other low-cost housing options in that they provide opportunities for street-level micro-entrepreneurship. 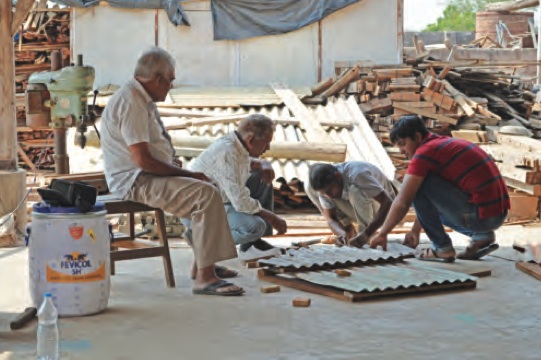 “People make shops. People rent out spaces. Their homes incrementally grow as they gain income, gain family members,” Mazereeuw says. “They can keep adding on, so that investment keeps growing and their assets keep growing.” Such benefits are not available in the high-rise housing typically built for low-income residents.

Mazereeuw and her team are therefore designing mixed-use, low-rise housing that will give residents the flexibility to expand their homes safely as needs arise. In collaboration with Hunnarshala, the researchers have been working on three neighborhoods that will begin construction this summer. Ultimately, Mazereeuw and her colleagues at the Tata Center hope to provide a blueprint for methods that will enable residents to weigh in on the designs for all new neighborhoods being developed under a slum eradication effort sponsored by the Indian Ministry of Housing and Urban Poverty Alleviation.

“The work Miho is doing is helping us understand if you’re building walls, where should the walls be,” Ochsendorf says.

Ochsendorf and his team are conducting associated research focused on addressing the omnipresent risk of earthquake devastation in Bhuj while enabling slum residents to continue to build their own low-cost homes. Currently, researchers are working to adapt a construction technique known as confined masonry to the conditions in India and to popularize it.

Common in South America, confined masonry interconnects a building’s brick walls with poured concrete corner columns in order to engage the full wall in transferring seismic loads to the ground. “Typically, a concrete frame will resist earthquake loads but the bricks in the walls aren’t considered part of the resistance strategy. If anything they’re considered a hazard,” Ochsendorf says. “In our mind [confined masonry is] about the best way to build an earthquake-proof house out of brick.”

The researchers want to use brick because that’s the material most familiar to residents. However, traditional Indian brick-making strips clay from the landscape, destroying arable land, and uses inefficient kiln-firing, which produces significant greenhouse gas emissions. “We’ve arrived at a scale where it’s no longer possible to satisfy the country’s demand for brick with the raw materials they have,” Ochsendorf says. “It’s kind of the perfect problem that combines energy, environment, and economics.” 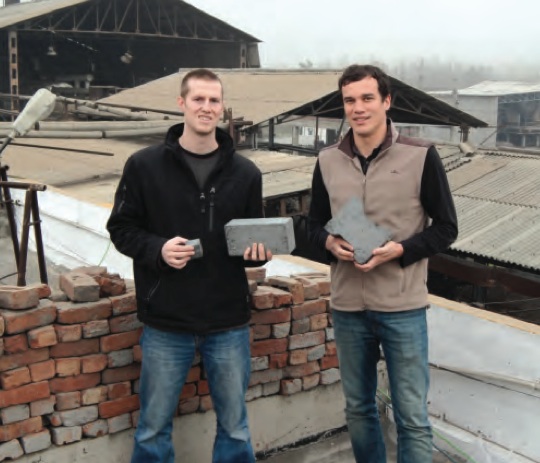 Graduate student Michael Laracy (left) and postdoc Thomas Poinot hold up the environmentally friendly eco-BLAC bricks they developed at MIT to substitute for the kiln-fired clay bricks (seen stacked behind them at an Indian paper mill) that are ubiquitous across India. Photo: Ben Miller, MIT

Ochsendorf’s team of researchers is therefore developing a new, environmentally friendly kind of brick that substitutes waste boiler ash for some of the clay and dries at ambient temperatures, eliminating the need for a kiln. This work has already led to a startup business, eco-BLAC, which was a finalist this winter in MIT’s $100K business plan competition.

Designing for the long term

The third element of the Tata Center project focuses on passive techniques for making homes safer and more comfortable without adding significant energy demands. “Starting at the lowest level, the question is, can you construct housing with structural systems using more renewable, less expendable resources while making them more environmentally acceptable from the point of view of air quality and particularly comfort?” says Tata researcher Leon R. Glicksman, a professor of building technology and mechanical engineering.

Glicksman, a member of the MIT Energy Initiative’s Energy Council, is leading a team examining the thermal performance of existing housing stock and testing the effectiveness of low-cost local options for insulation, such as rice husks stuffed into burlap sacks. The team is also exploring various building designs to maximize natural ventilation. “If you design the openings of buildings properly you can use just buoyancy-driven natural ventilation. If you have one opening at a low level and another opening at a higher level, if there’s a temperature difference between the inside and the outside, you get a chimney effect and that chimney effect will essentially drive air circulation through buildings,” he says. 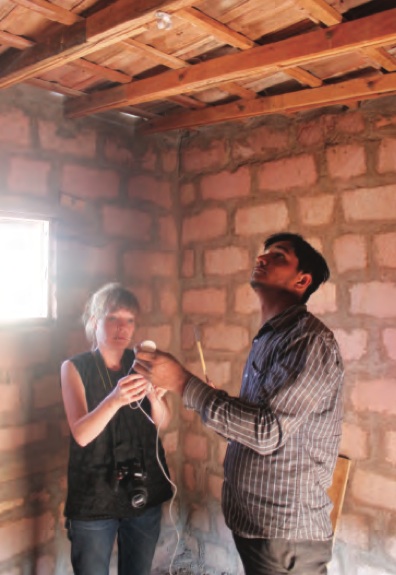 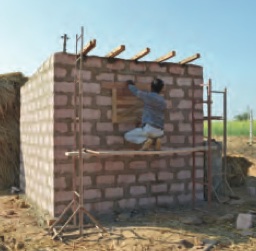 This photo shows one of the test units from the exterior. Photo: Madeline Gradillas G

One long-term goal of this project is to reduce the need for air conditioning. While air conditioning is currently a pipe dream for India’s poorest residents, the pattern in other countries such as China has shown that as economies improve, energy consumption rises precipitously. “The hope here is that as we develop housing and people move up in economic status, they’ll find that the more passive solutions are very comfortable and they won’t necessarily go to the solutions that use exorbitant amounts of energy,” Glicksman says.

Glicksman’s team has built five tiny one-room demonstration units in Bhuj, which members are using to test the performance of different kinds of insulation, roof designs, and natural ventilation, as well as to demonstrate the advantages of the new systems to residents. Persuading the local population of the need to change their traditional building methods is a critical part of the Tata Center project and a key reason for partnering with Hunnarshala, the researchers say.

“This is a notion of development that isn’t the conventional one,” Ochsendorf says. “From what we’ve seen and learned, we think it’s far more effective to work with local partners that can help us work out the challenges … [and] pilot innovation at a smaller scale before scaling up.”

This research was funded by the Tata Center for Technology and Design.

This article appears in the Spring 2015 issue of Energy Futures.