MIT chemists and electrical engineers have joined forces to make the first solar cell that produces two electrons for every incoming photon of sunlight in the visible spectrum, thereby wasting less heat and generating twice as much electrical energy from those wavelengths as conventional solar cells do. With that achievement, the researchers have broken a long-standing barrier on energy conversion efficiency in photovoltaic cells. Moreover, they have provided the first quantitative understanding of the process by which the “exotic” materials exhibiting that behavior produce extra current. The researchers envision using their novel technology in conjunction with today’s silicon cells. Applied as an inexpensive coating, it could increase the fraction of solar energy converted to electricity in silicon cells by as much as 25%.

Today’s solar photovoltaic cells waste a large fraction of the energy that is abundant in sunlight. They absorb a range of wavelengths, typically from the blue to the near infrared. When one of these photons (a packet of sunlight) strikes the semiconductor inside a solar cell, a single electron is excited to a higher energy level. Gathered together, those excited electrons can travel through a wire as current. But higher-energy blue and green photons deliver much more energy than needed to excite an electron, and the excess is released as heat. Indeed, there’s an accepted limit on the efficiency that can be achieved in a solar cell designed with a single semiconductor. Given the distribution of photons in sunlight—each with its distinctive wavelength and energy—even an ideal solar cell could turn only 34% of the total energy into electricity.

One way to deal with that efficiency limit is to stack up layers of different semiconductors, each absorbing different colors of sunlight. But that approach is proving to be costly. At MIT, Marc Baldo, professor of electrical engineering and director of the Center for Excitonics, and Troy Van Voorhis, professor of chemistry, have been revisiting another approach to breaking that barrier: They’re aiming to get two electrons out for each incoming photon.

That phenomenon—called singlet exciton fission—was first identified in the 1960s, when researchers observed an unusual phenomenon inside several organic molecules, one of them called pentacene. Generally, an excited molecule gets rid of its extra energy by giving off an electron and heat. But special rules of quantum mechanics forbid a pentacene molecule from dropping back to its low-energy state. Instead, the high-energy excited state spontaneously splits into two, each with half of the original energy—and each of them can generate one electron.

Over the past 10 years, singlet exciton fission has gone from an obscure phenomenon to a hot topic among solar researchers. The phenomenon has been observed in a variety of materials, all similar to pentacene and all discovered—like pentacene—by chance. And while exciton fission has been confirmed within materials, it has never been achieved in a functioning solar cell.

“The problem is that we can’t rationally design materials and devices that take advantage of exciton fission until we understand the fundamental mechanism at work—until we know what the electrons are actually doing,” says Van Voorhis. Research groups have proposed a variety of what Van Voorhis calls “exotic” mechanisms, which have become the subject of intense controversy in the field. But solid proof of what is actually happening has remained elusive.

Four years ago, Baldo and Van Voorhis decided to pool their expertise to tackle this problem. Baldo would assemble solar cells demonstrating exciton fission, and he would gather experimental data in sample fission materials. Drawing on those data, Van Voorhis would attempt to define the mechanism using simulation techniques he has developed that can calculate how electrons move within photovoltaic systems. “We wanted to do a big, comprehensive study—not just pick one material but do a whole sweep and vary all the parameters we thought might be important,” says Baldo. “Then we could ask: What is the mechanism that explains all the data?”

Achieving fission in a device

Baldo’s first challenge was to build a solar cell that generates extra electrons. In 2009, he and his team designed and built devices using pentacene combined with a fullerene, a hollow, all-carbon molecule that captures the exciton (the excited state) and releases electrons as current. Their results were mixed. Using special diagnostic techniques, they confirmed that exciton fission was occurring inside the device at a rate that varied with the thickness of the pentacene layer. “But we couldn’t detect any electrons unless we pulled them out using voltage from an external power source—and that’s not useful in a solar cell,” says Baldo.

Re-examining that earlier work, he, Jiye Lee and Daniel Congreve, graduate students in electrical engineering and computer science, and Nicholas Thompson, a graduate student in materials science and engineering, realized that most of the excitons in the pentacene were getting destroyed, either by the fullerene or by the conductive electrode under the pentacene layer. They therefore added a polymer layer that protects the bottom interface of the pentacene layer, blocking the excitons but letting current flow through. They also changed the spacing of the pentacene and fullerene layers. In addition, working with Vinod Menon, associate professor of photonics and optoelectronic materials at the City University of New York, they included within the structure a tuned mirror that enhances light absorption by the pentacene layer. 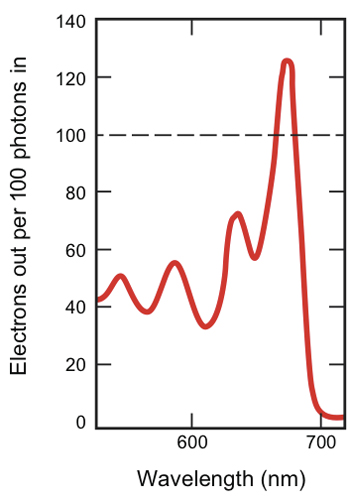 The new design was successful. As the figure on the left shows, at some wavelengths, the device generates more electrons than can be extracted from a conventional solar cell. Maximum production occurs at pentacene’s peak absorption wavelength of 670 nm, when 126 electrons come out for every 100 photons going in.

That outcome is significant. Baldo and Van Voorhis believe that this is the first time that anyone has generated more than one electron per photon using visible light, which makes up almost half the sun’s electromagnetic radiation at the Earth’s surface.

Van Voorhis’ theoretical work has likewise produced remarkable results. To gather experimental data for the theoretical studies, Baldo and his team prepared thin films of pentacene and three other materials in which exciton fission has been detected. According to the “classic” theory, during exciton fission, an electron in an excited molecule swaps places with one in a neighboring not-excited molecule. The electron from the excited molecule takes some of its energy with it and leaves some behind, in the process creating two lower-energy excitons, each of which can release an electron.

If the electron-swapping mechanism is correct, then exciton fission would work best when molecules are close together physically and well-connected electronically. To examine that possibility, the team used molecules specially synthesized by Timothy Swager, MIT’s John D. MacArthur Professor of Chemistry, to include bulky side groups of atoms—known among organic chemists as “spinach”—that change the molecular spacing or alignment but don’t affect the physics or chemistry of the material (see the diagram below).

Testing the effect of molecular packing on exciton fission

To see if electron exchange between molecules plays a role in exciton fission, the researchers prepared a variety of samples in which they altered the physical packing and electronic coupling of the molecules by adding bulky side groups. The examples shown here all have pentacene molecules at their core with various add-ons to alter the molecule-to-molecule spacing and alignment.

Ultimately, the team tested 10 variants of the four basic exciton fission materials. While the MIT researchers have the capability to count the numbers of photons and electrons, doing so fast enough proved to be a challenge. The fission process can occur as quickly as a few femtoseconds (10-15 seconds). For these ultrafast measurements, they turned to experts and specialized equipment at Brookhaven National Laboratory and the University of Cambridge.

Using the new experimental data, Van Voorhis developed a formula based on fundamental rules of physics that successfully predicts the fission rate in materials with vastly different structures. Notably, the work confirms the classic electron-swapping mechanism. “The simplest explanation is the right one,” says Van Voorhis. “The controversial or exotic mechanisms aren’t required to explain what’s actually being observed here.” 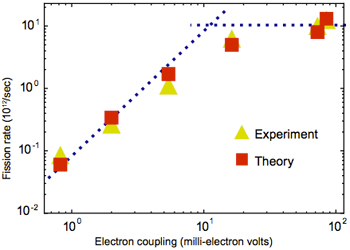 The effect of electronic coupling on exciton fission rate

Given a material with favorable energy levels, changing the molecular packing does affect the rate at which fission occurs. The rate is a thousand times faster in a well-packed system than it is in a poorly packed system. But as long as the energy levels are right, even the slowest rate is “still incredibly fast—plenty fast to get efficiency gains,” says Van Voorhis.

However, there is a “speed limit.” The figure at the left shows the rate of fission—calculated as well as measured—in the pentacene-based materials. As the electronic coupling between molecules in the material becomes stronger, the fission rate increases. But eventually the fission rate plateaus, despite increases in coupling strength. The explanation: Before electrons can move, the molecules they’re moving into and out of need time to shift other atoms around. If the electrons move too quickly, the molecules may not be ready to release or receive them. The fission rate is thus limited by the speed of molecular rearrangement.

The researchers are pleased with the agreement between their experimental and theoretical data—especially given the systems being modeled. Each molecule has about 50 atoms, and each atom has 6 to 10 electrons. “These are complicated systems to calculate,” says Van Voorhis. He adds, “That’s the reason that 50 years ago they couldn’t compute these things—but now we can.”

The robustness of exciton fission against changes in packing was also good news. “Many people thought pentacene had magic packing that led to fast fission…and that if you messed it up at all, you’d be out of luck,” says Van Voorhis. But that appears to be untrue, which is a relief to Baldo and other makers of solar cells because controlling molecular packing synthetically is difficult.

Improving and applying the new device

To date, the energy conversion efficiency of Baldo’s assembled devices is less than 2%. However, the researchers note that this is a “proof of principle” system. They are confident that further optimization will bring dramatic increases in efficiency.

Even so, they are quick to emphasize that their research findings won’t double the efficiency of solar cells because fission affects only the high-energy photons. Moreover, to get out twice as many electrons, they have to halve the energy per electron, and that effectively halves the voltage that the solar cell puts out. (“We’re not breaking energy conservation!” Baldo points out.)

As a result, they envision their system not as a stand-alone but rather as a coating on a conventional silicon solar cell. The low-energy photons (the infrared wavelengths) will be absorbed in the silicon, each generating one electron at the standard 0.6 volts. The coating will capture the high-energy photons (the blues and greens), create two low-energy excitons, and transfer the energy to the silicon, generating two electrons, also at 0.6 volts. The net result: Two photons can produce three electrons, all at the same energy.

“We would like to put our inexpensive coating on every silicon solar cell, and we believe it’d boost efficiency from today’s maximum of about 24% to more than 30%,” says Baldo. That’s a significant change in a field where improvements are typically measured in fractions of a percent. 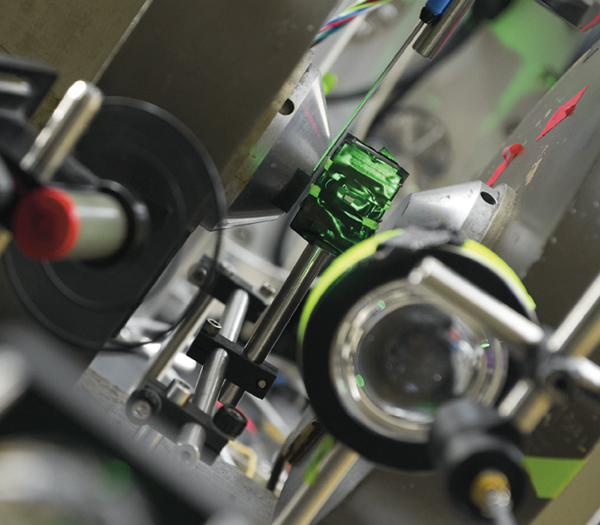 This research was supported as part of the Center for Excitonics, an Energy Frontier Research Center funded by the US Department of Energy, Office of Science, Office of Basic Energy Science. Additional support came from the United Kingdom’s Engineering and Physical Sciences Research Council and in the form of graduate fellowships from the National Science Foundation and Corpus Christi College, University of Cambridge. Research was carried out in part at the Center for Functional Nanomaterials, Brookhaven National Laboratory. Further information can be found in:

Investors awake to the risks of climate change

At the MIT Energy Initiative’s Fall Colloquium, finance executive Poppy Allonby laid out the current state of sustainability thinking among the investor class.