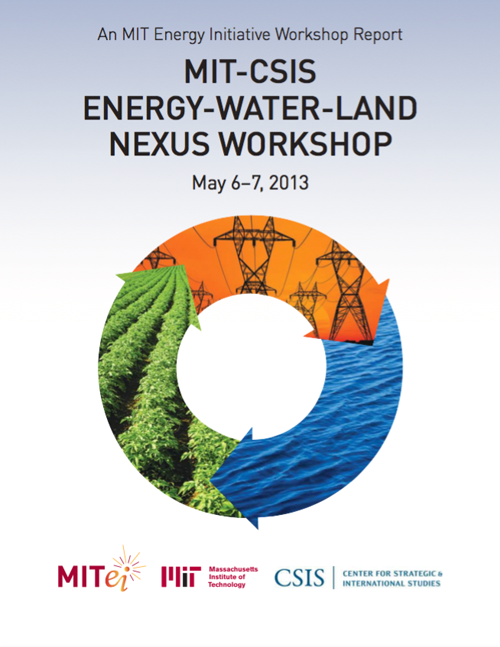 Download:
MIT-CSIS Energy-Water-Land Nexus Workshop
More information:
The availability of water and land resources is increasingly recognized as one of the next big issues facing the energy industry. On May 6 and 7, 2013, the MIT Energy Initiative (MITEI) held an Energy-Water-Land Nexus Workshop at the Center for Strategic International Studies in Washington, DC. The goal for the workshop was to develop a research agenda around the energy-water-land nexus, and to identify the important challenges to be addressed through university, industry, and government collaboration. The workshop was hosted by MITEIs Director, Professor Robert Armstrong, and Dr. Francis OSullivan, MITEI Director for Research and Analysis. The workshop brought together the expertise and insights of nearly 200 researchers from many of the 13 universities that have been partners in BPs Energy Sustainability Challenge (ESC) program, along with other leading experts with knowledge and understanding of the technology, economics, policy, and systems issues that accompany the energy-water-land nexus. This event grew out of the ESC program, a multi-year, multi-university research program, funded by MITEI Founding Member BP.

In 2010, BP initiated the ESC Program to study the linkages between energy production, energy use and natural resources particularly water, land, and minerals. The central goal of ESC has been to address the question: How will natural resource constraints affect the way we produce and use energy in the future? This work was motivated by the realization that future commercial and policy decision making on issues concerning the energy-water-land nexus needed a very strong technical base of understanding. BPs ESC Program, in collaboration with 13 university research partners, including MIT, Princeton, San Diego, Berkeley, Illinois, Texas, Tsinghua, Sao Paolo, and Cambridge University, has worked to develop this enhanced technical understanding of the issues pertaining to the energy-water-land nexus. Findings have been made available to practitioners through peer-reviewed journal publications and a series of BP-published handbooks, as well as through a range of tools and models. For more information about BPs ESC Program, visit http://www.bp.com/energysustainabilitychallenge.

MITEI wishes to thank BP and the Center for Strategic International Studies for their generous support of the MIT-CSIS Energy-Water-Land Nexus Workshop. MITEI also thanks the moderators, panelists, and participants who filled this day-and-a-half program with spirited discussion, thought-provoking debate, and substantive information.

Population growth and rising income levels will present a major challenge for mankind in meeting the worlds growing energy needs over the coming decades. The scale of the challenge is especially apparent when the expanding energy demand is viewed in the context of the finite, increasingly expensive, and carbon-polluting fossil resources that support the majority of todays energy supply. The simple availability and cost of energy resources are just part of an even more complex story. Contemporary energy production is dependent on other natural resources, particularly water, land, and non-energy resource minerals. Serious questions arise regarding the ways that this expanding energy demand will impact these resources going forward. The energy systems impact on water, particularly fresh water, and land is further complicated by climate change, which is affecting fresh water availability and land productivity across multiple spatial scales, and which is, of course, ultimately being driven by carbon emissions from the energy system.

Although much of the contemporary discussion regarding the energy-water-land nexus is focused on future challenges, many parts of the world are seeing water and land resources that are already stressed, impacting our ability to produce energy. The 2014 US National Climate Assessment report highlights how climate change is negatively affecting both water availability and land productivity across the United States. It points out that, for the case of water particularly, droughts and increasing stress levels are already impacting our nations ability to produce energy. The report also highlights the risks to the energy infrastructure that are emerging as a result of climate change.

Other regions of the world are also facing challenges today at the energy-water-land nexus. Dramatic economic growth coupled with Chinas expanding and migrating population is placing an increasingly greater demand on its energy system and on the limited fresh water resources in the eastern regions of the country. Unconventional gas production has recently provided a tangible example of an energy-water conflict in China. While much of China is arid, competing water demand from non-energy users might prompt the government to place limits on the amount of unconventional gas resource in the Szechwan Basin that can be exploited over the coming years.

Given that in almost every conceivable future scenario global energy demand increases, it is likely that energy-related water demand also will grow. If current fossil-based energy pathways and technology paradigms continue to dominate supply as analysis suggests, then energys water needs will likely rise faster than demand for energy itself, given that future production will be forced to move to lower-quality, more water-intensive, unconventional resource types. In important energy-producing regions which are already or projected to become water stressed, it seems likely that, in the future, energy productions water demands will come into greater conflict with the water demands of other sectors, particularly those of agriculture and municipalities. As it was made clear during the workshop, history teaches that crises relating to natural resources are rarely addressed effectively in a proactive, forward-looking manner. A crisis typically needs to materialize before meaningful policy action is taken. It seems very likely that this scenario will play out in the case of water for energy, particularly in countries without central control and overarching regulatory structures for water management, and where non-energy water users represent powerful regional political constituencies.

As such, the energy sector must proactively focus on reducing its water intensity. This is espe- cially necessary given the likelihood of increased conflict surrounding access to water resources; the likelihood that effective policy will not be implemented nor regulatory action taken prior to a crisis manifesting, see Session 4; and the energy sectors (sometimes) limited political influence relative to other major water users. Fortunately, technology can provide an effective pathway to lower water intensity. These technologies must also be economically compelling for them to be adopted. Today, technologies exist that can dramatically reduce the water requirements of major energy pathways; however, in many instances, the relative economics of these solutions means that operators choose not to implement them. Take, for example, thermal-based electricity generation. Todays thermal plants (particularly in the United States) use once-through or tower- cooled systems to shed heat as part of their thermodynamic cycles. These systems have varying levels of water intensity, but this demand could be eliminated almost entirely by using dry-cooling systems that replace water with air as the cooling medium. Unfortunately, this technology is more expensive than conventional cooling, and therefore, it is only used when no other option exists. An example of this is in South Africa, where dry-cooling has been adopted specifically to eliminate power plants need for water in an already highly water-stressed environment. The South Africa example demonstrates that water intensity can be massively reduced at scale, albeit by accepting an economic penalty. Nevertheless, the option exists and emerging advances in materials technology and surface engineering have the potential to significantly improve the economic attractiveness of these systems.

The extraction and processing of fossil fuels is another area in which technology could significantly mitigate water demand. An important example of this relates to hydraulic fracturing and the reservoir stimulation techniques that are being widely applied to unconventional oil and gas resources today. Hydraulic fracturing, see Session 7, requires very large volumes of water, often fresh water, and although on a full life cycle basis, the water volume actually consumed by fracturing is not extremely high, the impulsive nature of the processs water needs places very significant temporary demands on local water resources.

Technology can effectively mitigate many of the water issues associated with fracturing, and work is already ongoing that is focused on developing fracturing technologies that do not need fresh water, or that use entirely non-aqueous fluids. Research is also ongoing to design novel water filtration and treatment systems that allow for extensive recycling of hydraulic fracturing wastewaters. As in the power plant cooling technology case, many of these newer, less fresh water-intensive hydraulic fracturing techniques are currently not as economically attractive as more fresh water-intensive alternatives. Nevertheless, should it prove possible to improve the economics through further innovation and greater adoption at scale, it seems likely that the fresh water demands of the hydraulic fracturing process can be significantly reduced, if not entirely eliminated.

The examples of the water intensity-reducing technologies described here are just two vignettes from a much broader body of research and innovation focused on reducing the water needs associated with meeting todays and tomorrows energy needs. These examples demonstrate that, through both fundamental and applied research, technical solutions for reducing energys water needs can be found. However, these examples also suggest that more research is needed for these technologies to become economically compelling, and to make them the de facto choice for the industry. If that can be achieved, it may be possible to significantly reduce the fresh water demands of energy production. Doing this would help the energy sector and it would also help alleviate broader water conflict in water-stressed regions that are also important energy-producing areas.