Ruben Juanes was in middle school in northwestern Spain when he first knew what he wanted to study in life. “I had a very, very inspiring teacher for two years in a row. I really think that that was what sparked my interest in the sciences.” He was enrolled in an experimental sciences course that “was designed as a first exposure to mostly the natural sciences,” he says. “We learned about things like photosynthesis and the greenhouse effect and the laws of mechanics and gravity.”

He had another life-changing “first exposure” around this time, too. “I still remember…. When I was maybe twelve or so, I learned about MIT and I thought, oh, I would like to go there one day.”

It was only a matter of time. Juanes, the ARCO Associate Professor of Energy Studies in MIT’s Department of Civil and Environmental Engineering (CEE), has been part of the Institute since 2006, when he was hired as an assistant professor.

As happens in life, though—and in the underground multiphase flows that Juanes now researches—there have been some unexpected twists and turns along the path. Juanes’s journey into academia began during his undergraduate years, when he worked with a professor who had done his PhD in the United States and was a groundwater hydrologist. “That was my first exposure to actual research,” he says. “At the time I didn’t think hydrology would turn out to be my lifetime academic path, but it did.”

During graduate school, Juanes performed his PhD research with a professor at the University of California at Berkeley who, before joining the faculty, had been a researcher for Shell. Working with this former industry professional led Juanes to broaden the way he thought about subsurface flows: He expanded his focus to include not just water but also oil and gas. Now the topic of his research had become “three-phase flow”—the three phases here being water, oil, and gas.

Since then, Juanes has studied flows of all kinds but particularly the simultaneous flow of multiple fluids through porous media—a topic that requires an understanding of the intricate roadwork of cracks and fissures that fluids find their way into while traveling underground, as well as the interaction between the different fluid phases.

Much of his research is dedicated to flows related to energy and the environment. For example, recent work has focused on carbon capture and sequestration (CCS), a process of great interest to energy companies working with coal or gas and seeking to make their operations more environmentally friendly. The “sequestration” part of CCS involves taking carbon dioxide (CO2) that has been captured at power plants and other sources and injecting it into geologic reservoirs, thereby preventing it from reaching the atmosphere.

To determine the effectiveness of that process, Juanes and his team study how CO2 behaves underground. Under the high temperatures and pressures of reservoir conditions—typically at 2 kilometers deep—CO2 goes into a new form. It is neither a gas nor a liquid but rather a supercritical fluid. It is like a dense gas, so it has low viscosity, is mobile, and is less dense than water. “As a result, it is buoyant with respect to water and will tend to rise in the subsurface,” Juanes says. “But you don’t want CO2 to rise all the way up to the surface…because that would defeat the purpose of carbon capture.” Juanes is now investigating natural mechanisms that hinder that buoyant migration. His hope is that understanding those mechanisms could lead to the development of techniques for preventing the escape of CO2 sequestered in geologic reservoirs.

Another situation where underground flows don’t behave as might be expected is when energy companies inject water into an oil reservoir—a standard method of increasing the yield of oil from a well. Often the water is injected in one location and extracted from another. “But some of the fluid you inject arrives very early, and some of it arrives very late,” Juanes says. “It takes forever, to our minds.” This is a signature of anomalous transport— meaning behavior not described by classical theories. (While “anomalous” may imply “unexpected,” in the world of subsurface flows, unanticipated behavior is not the exception but rather the rule, notes Juanes.) One possible explanation is that flow is fast through fractured networks and slow through the remainder of the reservoir. Juanes and his team are working to verify such mechanistic explanations for anomalous transport, with a goal of creating models that can—with very few parameters—simulate the subsurface flow of critical fluids.

In performing such work, Juanes and his team typically run laboratory experiments and computer simulations. A different project takes them out into the field—or to be more precise, out by the lakeside. This work focuses on the natural processes by which lakes release methane, a powerful greenhouse gas. At the bottom of every lake is a layer of fine-grained, organic-rich sediment that naturally produces methane. “This methane will eventually be released into the lake,” Juanes says, “but in a very irregular, episodic, point-like fashion.” How the releases occur will determine whether the methane traverses through the water column and reaches the atmosphere. To explore that process, Juanes and his team deploy a multi-beam sonar system on the lake floor that records with tenth-of-a-meter and single-second resolution the venting of methane bubbles from the sediment layer.

Juanes’s research into underground flows of oil and natural gas brings him into direct contact with scientists who work in the energy industry. These partnerships, he says, have been some of the most fruitful collaborations he’s been a part of. “The most successful projects scientifically—the ones where we’ve published the best work—were the ones where we had the closest collaboration with the sponsor,” Juanes says. “In many ways [working with industry scientists] has sparked our creativity in ways we perhaps did not anticipate. They have very practical problems, and that forces us to step outside of our comfort zone.”

While Juanes thrives on collaboration with other scientists, he is first and foremost a professor, and his students and their education are incredibly important to him. He and his peers in CEE are continually thinking of new and better ways to challenge and prepare the young engineers under their tutelage. For example, Juanes and some fellow CEE professors recently launched a plan to give the topic of energy a more prominent place in their department. “[We] feel strongly that we can have a positive presence, a positive offering, when it comes to energy education,” says Juanes. They are working to incorporate more energy-related topics into their current class offerings, and they are looking into a broader revamping of CEE’s overall curriculum. Juanes envisions these larger changes as “a kind of ‘energy track’ in the new flexible curriculum in our department.”

Juanes feels strongly about both MIT and his students. “[MIT] is a very stimulating place,” he says. “It really challenges you to rise up to the occasion, to go past what you are comfortable with and really develop into a professor, a researcher, at the forefront of whatever it is that you do.” But in his mind, what really makes MIT special is the students. He feels he has been “blessed with fabulous students over the years.”

He cites one specific part of the teaching experience as most rewarding: “witness[ing] the evolution of a grad student.” To him, there’s nothing as fulfilling—from an academic perspective—as seeing students evolve and mature and become the world experts in their field. “To see the confidence they display, the knowledge they amass, and how they’re able to, along the way, go from being students who are on the receiving end to really being mentors to the new batch of students coming in—that process, I must tell you, is magical.” 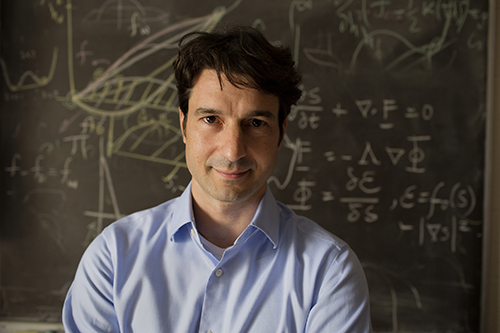