Every January, MIT students, faculty, and staff take part in the Institute’s Independent Activities Period (IAP), when they are invited to step outside their comfort zones, dabble in unfamiliar areas, and encounter a richer view of the world. In 2015, members of the community could fill their days and nights with new experiences ranging from touring a nuclear fusion reactor, to using Fermat’s rule to analyze election results, to trying a (very steady) hand at the art of the Japanese Tea Ceremony. 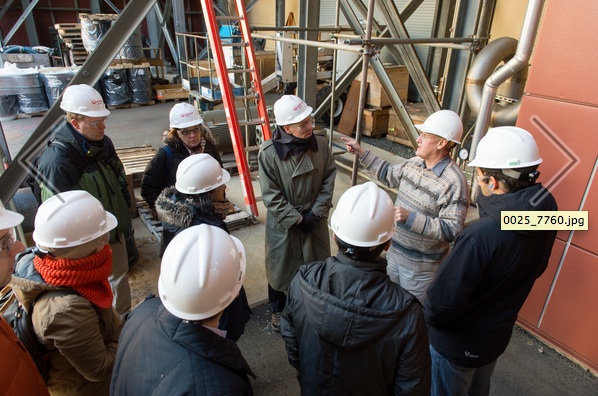 During IAP, MITEI organized a group tour of Veolia Energy North America’s Cogeneration Station in Kendall Square, Cambridge. The facility generates electricity to power the region’s electrical grid and provides steam heat to Veolia’s 220 customers throughout Boston and Cambridge. Within the plant, natural gas is burned in an electricity-generating combustion turbine. Heat remaining in the exhaust gas is used in a heat-recovery steam generator to produce high-pressure steam. Some of this steam is exported, while the rest runs a steam-driven electric power generator. A recent reconfiguration of the facility, including a 7,000-foot steam pipeline extension, is estimated to reduce greenhouse gas emissions by approximately 475,000 tons per year. Giving the tour at the far right of the photo is Veolia’s Director of Network and Distribution George Hengerle. Photo: Justin Knight 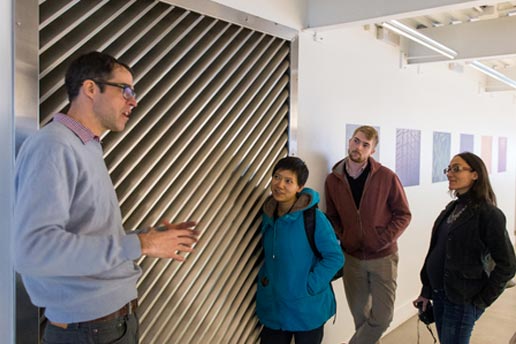 From left: During a tour, Andrew Motta, operations director for Artists for Humanity, describes highlights of the group’s LEED Platinum-certified studios to MIT graduate student Yuqi Wang, Dylan Ayers of MITEI, and MIT postdoctoral fellow Ornella Iuorio. Behind Motta is a vent that provides cool air to the building. To save energy, Artists for Humanity’s studios were built without air conditioning. Instead, fans situated on the building’s roof blow air down a shaft and into this vent at night, when the outdoor air is coolest. As a result, the building starts each day cooled to a comfortable temperature, with no need for the constant energy expenditure of air conditioners.