MIT researchers are asking you to help devise a plan for dealing with climate change.

At their online forum, you can review the impacts of plans now being discussed and debated internationally—and you can try to design a plan that might be better.

Based on assumptions in your plan, you can run computer simulations to test its impact on global temperature and sea level and determine its eco­nomic costs and benefits out to 2100. You can also take part in organized debates with others and ultimately vote on which plans you believe would be most effective and most feasible.

No matter your level of expertise, you would be helping MIT achieve its goal: to harness the world’s collective human intelligence and computer power to address what is viewed by many as the world’s most important and challenging problem today.

Researchers worldwide are tackling climate change in various ways, but the problem is so vast and complex that no individual or group can have all the solutions or even understand it all. Moreover, traditional methods of communicating—conferences, journal articles, public media, and so on—are not capable of gathering and synthesizing the distributed knowledge accurately and quickly.

Thomas W. Malone, the Patrick J. McGovern Professor of Management, believes that it is time to address the climate change problem using collective intelligence. “We need to connect people and computers so that collectively they act more intelligently than any person, group, or computer has ever done before,” he says.

Making such connections is now possible on an unprecedented scale, and the outcome can be powerful. To illustrate, Malone cites not only Wikipedia and Linux but also popular Internet sites where the combined wisdom of thousands of users has proved surprisingly accurate at predicting the outcomes of future elections, sporting events, and more.

To apply collective intelligence to the climate change problem, Malone, who is director of MIT’s Center for Collective Intelligence (CCI); Robert Laubacher, CCI’s acting executive director; and their CCI colleagues have developed an online forum called the Climate Collaboratorium, a combination of software tools on a website and a broad community of people who use them, including policy makers, businesspeople, educators, students, activists, and other concerned citizens.

Key to the Collaboratorium is the notion of “radically open computer modeling.” Many computer models are now available that can simulate key processes and relationships pertaining to climate change. However, most have been written and used by small groups of people who decide what assumptions to make, what possibilities to examine, and how to interpret the results.

The MIT team is developing a library of such models that users can run, trying out their own assumptions and generating results that other visitors can examine and evaluate. Over time, the team hopes that many visitors to the website will add more models and modify models that are already there.

For example, the first web-accessible, interactive simulation model in the Collaboratorium was C-LEARN—a model developed by John Sterman, the Jay W. Forrester Professor of Management, graduate student Juan Martin, and their colleagues in a consortium called Climate Interactive.

To try out a plan with C-LEARN, users select target values for future greenhouse gas (GHG) emissions over the coming decades in three regions of the world: industrial countries; large, rapidly developing countries; and other developing countries. Users also set future changes in land use that will affect GHG removal. Specifically, they define the rate of deforestation (cutting trees for development or agriculture) and the rate of afforestation (planting trees to create new forests). For each set of values, C-LEARN calculates the resulting changes in atmospheric concentrations of GHGs and in temperature and sea level to the year 2100 and displays them on the same page where users enter their inputs.

Through other models incorporated in the site, users can also assess the economics of their choices. For instance, for a given plan, how much will we have to invest to reduce emissions, and—on the other side of the balance sheet—how much will we save by not having to repair or adapt to the damage that would have occurred had we not taken action? The Collaboratorium quantifies such economic trade-offs by drawing on results from existing large-scale models—without actually running them.

For example, several research groups have used their major models to examine different stabilization targets for atmospheric carbon dioxide (450 ppm, 550 ppm, and so on). The models determined the emissions levels and policies that would be required to meet each target and then calculated the resulting drop in gross domestic product (GDP) associated with each stabilization level as compared to “business as usual” (the continuation of current emission trends).

Laubacher and the Collaboratorium team used the results from these model runs to create “response surfaces”—simplified models that can quickly show the relationship between selected stabilization levels and the reduction in GDP associated with each and then mathematically interpolate between those discrete points so that users can choose any values they like.

Using the same approach with results from other models, the researchers also produced response surfaces that show the GDP losses that can be prevented by avoiding the damage associated with specific increases in temperature. With those tools, users of the Collaboratorium can get fast, approximate predictions of the economic costs and benefits of any proposed plan.

The Collaboratorium also addresses non-economic issues that must be considered when judging climate plans. Drawing on qualitative results from studies by the Intergovernmental Panel on Climate Change and others, the researchers prepared tables that show the impacts of each degree of warming on water supply, agriculture, coral reefs, and other factors in different regions of the world.

“With those capabilities, people are using the Collaboratorium to assess the impacts and trade-offs of the plans and proposals being discussed at the UN climate talks in Copenhagen,” says Laubacher. Moreover, notes Malone, with thousands of people trying out different combinations of assumptions and possible actions, the Collaboratorium may actually yield better solutions than those now on the table.

Like most online forums, the Collaboratorium hosts open, informal discussion among its visitors. But it also provides a “debate summary,” which offers a concise look at key issues and different positions on them. The design is based on “argument mapping,” an approach developed by team member Mark Klein, CCI principal research associate. Discussion is organized around issues, positions, and arguments.

To illustrate, one key issue is, how should we divide up the emissions reduction task among the different regions of the world? Positions posted by users might include making the same percentage reduction everywhere, achieving the same per capita use everywhere, and having the developed countries cut emissions before the developing countries do. Users can then post arguments for and against those positions, based on scientific studies, economic evidence, moral grounds, and the like.

The site organizes the discussion to be productive and systematic. “Every point or argument has a location, and once it’s there, there’s no point in saying it again,” says Malone. “This approach reduces counterproductive behaviors like repeating comments and changing the subject, which make many online discussion forums unhelpful.”

The combination of accessible models and constructive debate permits users to explore issues and possibilities in great depth, but even with these tools in place, there is still a risk that the exercise would never converge on a result. The Collaboratorium therefore lets people express their preferences by voting.

They can vote for or against specific plans that are posted, including those being discussed in Copenhagen. And they can vote for or against comments made by other visitors. On scientific issues—for example, what fraction of carbon dioxide emissions ends up in the upper atmosphere—participating experts may sometimes agree on the “right” answer. When they don’t, other participants can learn from their discussion and debate.

Permitting people to vote provides a powerful means of focusing in on possibilities that are the most plausible or most promising. “We refer to this approach as ‘electronic democracy on steroids’ because it lets many, many people express their opinions about even fairly detailed issues if they care to,” says Malone.

If they do not care to, they will be able to appoint others to vote on their behalf. An individual might, for example, give his or her proxy to the National Academy of Sciences for scientific issues and to the Sierra Club for political issues—but retain the right to vote as an individual on issues related to the division of responsibility between industrial and developing countries.

The researchers spent considerable time and effort recruiting, motivating, and organizing the Collaboratorium’s first contributors and moderators. Since the website’s launch in November 2009, the number of participants has grown. But the pressure is on to engage an ever-larger community of both experts and non-experts—large enough to achieve the wisdom of collective intelligence.

“In the extreme form,” says Malone, “you can imagine the Climate Collaboratorium as a kind of societal institution where many tens or even hundreds of thousands of people around the world are actively involved, contributing information, expressing their opinions, and helping to formulate the best possible plan for the world to deal with climate change.”

This research was supported by a seed grant from the MIT Energy Initiative. Other sponsors included Sustainability@MIT and the Argosy Foundation. More information can be found at the Climate Collaboratorium project page at the MIT Center for Collective Intelligence and in the following publications:

This article appears in the Spring 2009 issue of Energy Futures. 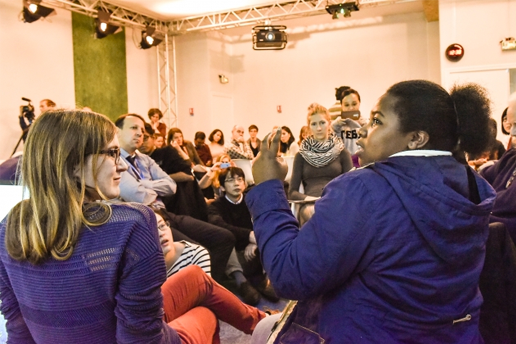 Climate negotiation role-play in Paris feels like the real thing