Georgia Perakis, MIT’s William F. Pounds Professor of Management, started her academic career by researching traffic flows, but not because she loved highway infrastructure or urban planning. A fascination with analytics is what drew her to traffic. It’s the overarching theme that links almost all of her work, including her current research in the green energy sector. She recently finished a study on subsidies for green technologies, and she works continually with industry players on energy analytics projects.

Perakis grew up on the island of Crete, off the coast of Greece. By her own admission, Crete is a traffic-filled place (“on a whole different level than Boston,” she says). The traffic there may have had an impact on her later interest in road congestion, but her path to academia began much further back, even before her birth.

On the eve of the Second World War, the man who would become Georgia Perakis’ father was in Switzerland on the way to completing his PhD. He hadn’t yet finished when the war began. Called back to Greece to serve in the army, he was forced to put his academic aspirations on hold—a hiatus that would turn out to be permanent.

The inspiration from his years of study stayed with him, however, and for his children years later, the lure of academia was palpable. “He never told us what we had to do,” Perakis says, “but I think from the way he talked, both my brother and I knew we wanted to become academics. He communicated his love for learning in a very implicit way.”

Her father’s experiences served as the first spark, but Perakis soon discovered that it was her own interests and strengths that would fuel her love of knowledge, especially in math and the sciences, for years to come.

“Math to me felt like a game, like fun,” she says. “As a young kid, I think part of it was I had the right teachers—they would give us lots of problems to solve. It felt like puzzles, and it was much more interesting than just reading.”

Perakis never lost her love of math. Over the years, she honed in on the kind of math she found most captivating. “I didn’t want to do pure math because it was too theoretical,” she says. She preferred applied math, in which mathematical theories and modeling are applied to everyday situations. After completing her undergraduate studies in Athens, Greece, she came to the United States to begin a PhD in applied mathematics. This was where she took action on her interest in traffic. “Traffic drew me,” she says, “because it was a very interesting phenomenon that you could model with math. When you visualize traffic, you find it moves very similarly to a fluid in a pipe, which allows you to use interesting mathematical models to study it.”

From this starting point, her PhD thesis eventually came to focus on complex optimization models and methodological algorithms for solving them. As part of her thesis, she worked with operations research professor Thomas Magnanti at MIT, who would later become dean of the MIT School of Engineering and is now an Institute Professor. This was the beginning of a long and fruitful research partnership. Soon Perakis made the decision to come to MIT as a postdoc. Not long after, a faculty position in operations research opened up at the Sloan School of Management, and her career as an MIT educator began.

From there, Perakis’ interests have broadened, though they remain connected by the common threads of operations research and optimization. Since her days studying traffic, she has branched out into subsidies for green energy technologies. Her original work on the topic (reported in Energy Futures, Autumn 2013) focused on incentives for green technology adoption—in her words, “what kind of subsidies the government should give to consumers.” Her latest work deepens that research by focusing on two topics related to subsidies that she did not examine in her first pass.

“In the first [project], we ignored the fact that industry competes and [that] there are nowadays many electric vehicle companies in the market, which compete for the same customers,” Perakis says. “This competition has changed the name of the game.”

The other element Perakis and her fellow researchers have sought to quantify is a positive externality of the subsidies. When consumers adopt green technology, they reduce carbon emissions. “So, effectively, that reduction should be put into the model as well,” Perakis says. She is referring to one of the nuances of economics: externalities, both positive and negative. Encouragement from the government to adopt green technology by using subsidies incentivizes consumers to come on board, which reduces emissions—a positive externality. Perakis is tackling this phenomenon with mathematics. The result is an insightful model that sheds more light on how government and industry should tackle tough policy questions related to green technology subsidies in the future.

Not all of Perakis’ energy-related research falls into the public policy arena. A good deal of her time is spent working with companies in the energy industry. Often this involves tackling a specific operations challenge, such as predicting when and which pipes will corrode or forecasting where damage will occur from a superstorm and where emergency restoration crews should be placed before the storm in order to restore outages quickly. Apart from energy research, Perakis also does research in the retail industry, for example, using data to design models that can help retailers run promotions more efficiently. The common denominator in all her research is the availability and use of data to build models that will yield “better” decisions. Perakis cannot stress enough the importance of information gathering for leaders in the energy industry: “You need good data to be able to say something meaningful.”

She says that the utilities she has worked with are quickly learning this truth. “I can see now that they’re catching on to the fact that analytics is important,” she says. “They see that they still need to streamline their data, and without good data, you cannot build good analytics models. But they now understand the importance of analytics. I can see it.”

Perakis displays a warm camaraderie with her fellow researchers in both industry and academia. Only one set of relationships seems to rival it: those she cultivates with her students. She teaches graduate students—MBAs, master’s, and PhDs—and she deems them “smart, extremely smart.” She keeps in touch with many of them post-graduation, and she can rattle off the number of PhD students she has graduated to date without hesitation: 17.

“I am very close with my PhD students,” Perakis says, and that closeness is evidenced by a collection of individual student photos, arranged in a frame shaped like a tree, that rests on the wall above her desk. She explains: “That was one of their birthday presents to me.”

This recognition of her obvious popularity with her students is accompanied by a sizable dash of humility. When asked what the most challenging part of being a professor is, she laughs. “Everything.”

She’s also well aware of the challenges her students face. One topic in particular stands out: women in academia. “I think that people have at least tried to make an effort not to have any bias about men and women [in the workforce]. But there are still mental blocks that exist in people’s subconscious.”

However, she rarely discusses this issue with her female students. “If you just have a conversation it’s not as effective,“ she says. “The way you act and the way you interact with them as a female in the field—that’s how you inspire them.” 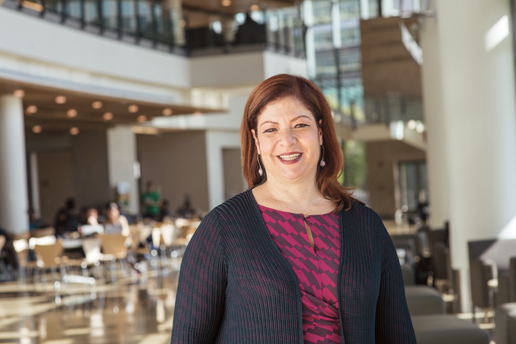