To encourage the adoption of green technologies, some governments are providing subsidies to consumers who buy solar panels, electric vehicles, and the like. A new MIT model can help policy makers determine the level of subsidy needed to meet a future technology adoption target at minimal cost. For any target, the model calculates the government’s optimal subsidy and the technology supplier’s optimal production quantity and selling price (for maximum profit). Critical to the optimization process is a prediction of consumer response based not only on the price and rebate but also on factors such as environmental values and familiarity with the technology. Analyses show that meeting the target requires recognizing the full range of possible demand outcomes—and the more uncertain the future demand, the better the deal for consumers will be.

When governments offer consumer subsidies on green technologies, the goal is generally to achieve some critical level of demand that will serve to bring down prices, encourage product improvements, establish wider familiarity, and ensure a continuing stream of future customers. But setting a subsidy that will elicit the desired response while minimizing government expenditures is difficult. Part of the problem is that policy makers don’t know in advance how consumers will respond to a given subsidy. They also don’t know how suppliers of the green technology will behave. Although the subsidies are paid directly to consumers, suppliers will take them into account as they decide on future production quantities and sales prices— and like the policy makers, the suppliers must make their decisions without knowing how consumers will respond.

“Policy makers cannot develop effective subsidy programs for green technologies without a clear understanding of what drives consumers to adopt the technologies and companies to invest in them,” says Georgia Perakis, the William F. Pounds Professor of Operations Management and Operations Research/Statistics. To help policy makers—and suppliers—make the best decisions they can, she and her co-workers developed a model that describes consumer behavior and created a comprehensive framework that examines supplier decision making and then optimizes subsidies for a range of adoption targets.

To begin their investigation, Perakis and Ruben Lobel PhD ’12—now an assistant professor at the Wharton School of the University of Pennsylvania— developed a model of the adoption of rooftop solar photovoltaic panels by residential consumers. The model tracks the decision by every household to purchase or not purchase solar panels, taking into account the rebate offered by the government. However, the model doesn’t simply assume that as price goes down, demand goes up in a regular, predictable fashion. Instead, it takes into account a variety of other factors. For example, the “utility” to the consumer of buying solar panels comes not only from the sale of electricity but also from the social value of being environmentally friendly. The consumer’s decision is affected by “information spread.” (If your neighbor buys the technology, you’ll be more likely to buy it.) And the cost of installation is not constant but decreases as the number of installations increases. Based on that consumer model, Perakis and Lobel developed a tool that calculates optimal subsidies to achieve a desired adoption target while minimizing government expenditures on consumer rebates.

To validate their model, Perakis and Lobel performed an empirical study of the solar market in Germany. First they gathered historical and projected data on numbers of households, their electricity bills, and other relevant information as well as details about solar installations between 1991 and 2007 (size, installation cost, average electricity yield, and so on). They then forecast annual solar installations out to 2030. Using the policy optimization tool, they determined the optimal subsidy for meeting possible adoption targets and the costs incurred.

Their results show that the subsidy program now in effect in Germany is not economically efficient. There exists a way to reach any target at a lower overall cost. The key is in the timing of the subsidies. “Our analysis suggests that German policy makers should increase current subsidies and then phase out future subsidies at a faster rate,” says Perakis. “They’d be able to spend less and still achieve the same target adoption levels.”

Other players in the game

The next step is to understand how suppliers respond when the government establishes a subsidy program. To describe the government-supplier interaction, Perakis turns to game theory. In “Stackelberg competition,” there are multiple players in a system who are not coordinated. Instead, each entity acts “selfishly,” and one of the players always moves first. So you have sort of a game, explains Perakis. As shown below, in this game, the government acts first, setting the subsidy. Suppliers then follow, each one making its own decisions about pricing and production levels—with the subsidy program in mind. 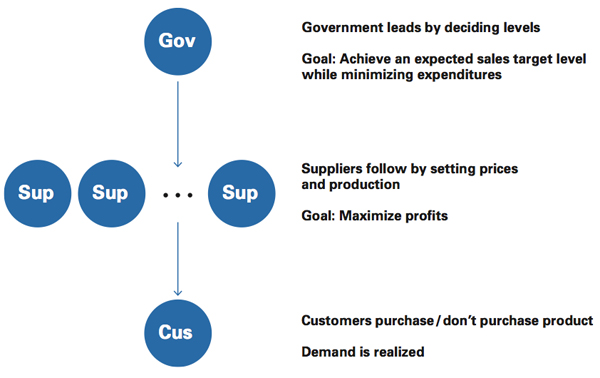 While there are theoretical models for “solving” a Stackelberg game, in this case there’s an added complication: the consumers. Both the government and the suppliers must make their moves without knowing what consumers will do. So from their perspective, future demand is uncertain. Based on their experience, they can predict some average future demand. But in reality there’s a range of possible levels of future demand—both higher and lower than that average—and there’s a certain probability that each of those levels will actually occur.

Perakis, Lobel, and Maxime Cohen, a graduate student in the MIT Operations Research Center and a Shell-MIT Energy Fellow for 2011–2012, have made a model of the system that can take into account that demand uncertainty. The model assumes that government aims to reach its target while minimizing expenditures and that suppliers simply seek to maximize their profits. (Those assumptions can be changed.) The model then calculates for each target level the optimal subsidy for government to offer and the optimal production and price for suppliers to set—assuming that consumers respond to those decisions as calculated by the demand model. That calculation can either assume an average consumer demand, or it can explicitly recognize the uncertainty of consumer demand, taking into account the full distribution of possibilities.

To better understand the dynamics of the system, the researchers used their model to perform theoretical studies of how various assumptions and choices can influence outcomes. One question relates to the impact of including or excluding demand uncertainty from the decision-making process. “Right now, government and industry typically look at what consumer demand is on average and then determine their policies based on that average demand,” says Perakis. What does ignoring demand uncertainty mean for participant behavior—and for the likelihood that government will meet its technology-adoption target?

Indeed, the impact of including demand uncertainty is evident in all the theoretical results: Optimal subsidies are higher, government expenditures for consumer rebates are higher, the quantities manufactured by suppliers are higher, and prices and supplier profits are lower. Each of those results improves the situation for the consumer—at the expense of government and industry. And the greater the uncertainty in demand—that is, the wider the variability—the more consumers will benefit.

To test those results, the team performed a case study of GM’s Chevy Volt. They based their analysis on the first 18 months (December 2010–June 2012) of sales data for the Volt. The figure below shows the optimal subsidy, production level, supplier profit, and government expenditure for meeting various targets as calculated based on average demand (blue) and on uncertain demand (red). 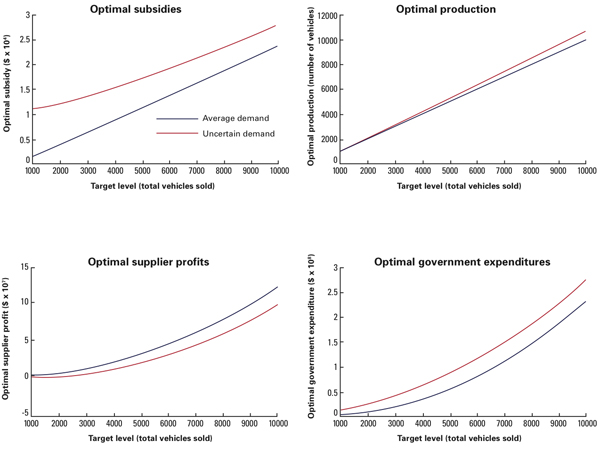 Results from a case study of GM’s Chevy Volt, using sales data from December 2010–June 2012. In setting the subsidy, government aims to meet a technology adoption target at minimal cost; in responding, suppliers seek to maximize their profits. The blue curves show optimal subsidies, production levels, supplier profits, and government expenditures calculated based on average predictions of future consumer demand. The red curves show the same values resulting from calculations that explicitly account for the uncertainty in future demand. When uncertainty is included, subsidies, production, and government expenditures are higher, and supplier profits are lower at all target levels.

Again, results from calculations based on average demand overestimate consumer response. As an example, consider a target of 3,500 electric vehicles. By the average method, the optimal subsidy to get that number of electric vehicles on the road is $7,500. But taking into account uncertainty, the optimal subsidy for that target is about twice as high. Likewise, the average calculation undershoots the optimal production, though not by much. And it overestimates industry profits and underestimates government expenditures. Those gaps are evident at all targets, and the spread increases as the target gets higher. Calculations based on various levels of uncertainty show that the spread between the results increases as demand becomes more uncertain. The quantitative results are thus in line with the theoretical findings. “And at the end of the day, the net of what the consumer will pay—the price minus the rebate—will be less,” says Perakis.

Those analyses provide some insights into why current subsidy programs may not work as planned and how governments might do better. In addition, Perakis performed analyses based on different assumptions, and some yielded results that she deemed “surprising.” Here are a few examples.

Perakis and her team continue to gather insights into the factors that determine how subsidies play out. However, she stresses that the real goal of their work is to provide practical tools for designing successful programs for encouraging green technology adoption. She believes that their novel research approach “could have a significant impact on society as policy makers start using these tools and insights to make their strategic decisions about future subsidies.”

Development of the consumer demand model and the German solar market case study were supported by a seed grant from the MIT Energy Initiative (MITEI). Formulation of the comprehensive decision-making framework was supported by a MITEI seed grant as well as by the National Science Foundation. Further information can be found in: 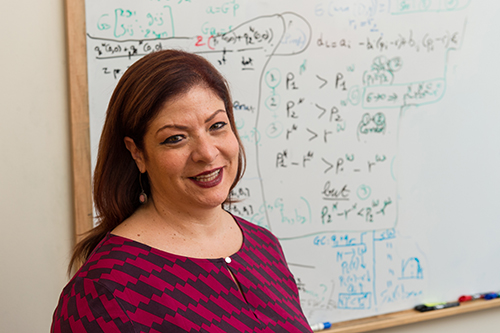