Engaging in “science statesmanship” is essential for path forward on climate and nuclear security, says Moniz.

Ernest J. Moniz, MIT professor emeritus, nuclear physicist, and former United States Secretary of Energy, is the recipient of the American Academy of Arts and Science’s inaugural Award for Excellence in Public Policy and Public Affairs. The award, presented at an April 11 ceremony, was created to recognize excellence, independence, and effectiveness in public service.

When presenting the award, former US Secretary of Defense Ashton Carter, a fellow physicist, shared his admiration for Moniz as a thoughtful colleague who provided sound council when they served together in President Obama’s cabinet. “I was very grateful to have him as a colleague,” said Carter. Nancy Andrews, chair of the board of the Academy; Ernest Moniz; Ashton Carter, former US Secretary of Defense; and David Oxtoby, president of the Academy. Credit: M. Stewart, American Academy of Arts and Sciences

Moniz reflected on collaborating with Carter on nuclear defense issues, developing the Iran nuclear deal with then-Secretary of State John Kerry, and leading technology initiatives to address climate change during his tenure as Secretary of Energy.

“It gave me a chance to apply a scientific manner of thought to important problems, especially in global affairs,” he said, adding, “When a President has among his priorities two of your mission areas—the clean energy and climate mission and the nuclear security mission—that’s a pretty good time to be in that position.”

In addition to being a key coalition builder for the Paris Agreement, Moniz played a central role in developing and launching Mission Innovation, a multi-national initiative dedicated to advancing clean energy. That initiative, he said, made “a statement that technology innovation in clean energy is at the core of the solutions to climate change.”

Moniz spoke about employing “science statesmanship” to engage across party lines and internationally, with a “pragmatic, step-by-step approach” to achieve sustained progress. He underscored the importance of building political coalitions around “low-carbon and social equity” measures.

He credited his mentor, the late MIT Institute Professor Herman Feshbach, with encouraging his participation in public affairs and public policy. “He was a person who was dedicated to the dialogue—the scientific exchange, and exchanges more broadly—as absolutely fundamental to risk reduction,” Moniz said of Feshbach, who was also a past president of the Academy.

“Ernie’s work combines deep intellect and broad impact,” said David W. Oxtoby, the Academy’s current president. “Ernie exemplifies values that are important to the American Academy by applying scholarship to service and bringing policy concerns to academia. He is the perfect choice for our inaugural recipient of the Award for Excellence in Public Policy and Public Affairs.”

“I’m very, very honored to receive this award and it will give me further inspiration to take steps forward on the way to longer-term solutions,” said Moniz.

Moniz was on the MIT faculty from 1973 until 2013, when he became US Secretary of Energy. He is now the Cecil and Ida Green Professor of Physics and Engineering Systems Emeritus and special advisor to the MIT President. He was the founding director of the MIT Energy Initiative. He is president and chief executive officer of the Energy Futures Initiative, a Washington-based energy technology and policy innovation nonprofit, as well as co-chair of the board of directors and CEO of the Nuclear Threat Initiative. 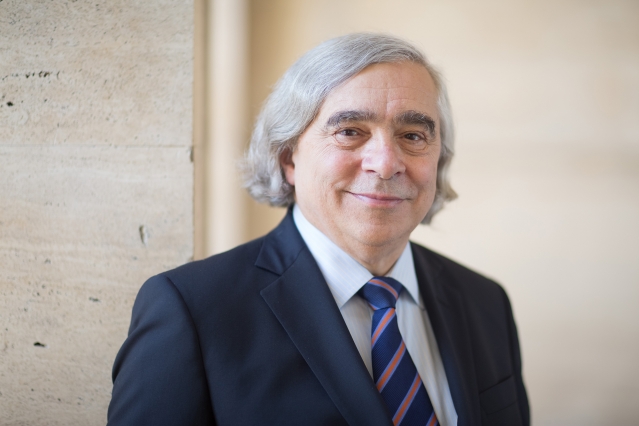