For the past two weeks, climate negotiations at the 2018 United Nations Climate Change Conference in Katowice, Poland — a.k.a. COP24 — have focused on rulemaking around implementation of the 2015 Paris Agreement to reduce global greenhouse gas emissions.

The process has left negotiators and observers alike frustrated as reaching consensus proves difficult on key issues, including how to ramp up climate finance for poorer countries and how to monitor and report emissions reductions. Some of the fiercest debates have arisen over whether to officially “welcome” the new Intergovernmental Panel on Climate Change (IPCC) report on the urgency of keeping emissions below 1.5 degrees Celsius, which was opposed by just four nations: the U.S., Russia, Kuwait, and Saudi Arabia.

Speaking to the parties on Dec. 11, U.N. climate chief Patricia Espinosa asked them to stay the course, saying, “Many political divisions remain. Many issues still must be overcome. But I believe it’s within our grasp to finish the job.” She challenged them, “Let’s complete the Paris Agreement Work Program and, by doing so, immediately unleash the power of the Paris Agreement itself.”

MIT participants are here at the conference to support that aim — to help unleash the power of the Paris Agreement by sharing analyses and insights that can aid nations in determining the right policy and technology solutions for meeting emissions reduction targets.

In addition to presenting research, MIT researchers have come to learn and find inspiration for their work. For several first-time participants in the conference, it has been emotionally powerful in ways they didn’t expect.

Sruthi Davuluri, a master’s student in the Technology and Policy Program (TPP) who attended the first week of the conference, came to Katowice looking to broaden and deepen her knowledge of different nations’ policies and initiatives to address climate change. She says she felt discouraged for the first few days, especially given the dialogue around the IPCC’s report.

“In the negotiations, there were clear tensions between countries trying to push through and those trying to slow down the process,” she says. “In some sessions, people from the developing nations said they feel panicked. They know how difficult it is to convince other nations to see beyond their own borders, and how a global temperature rise of ‘even’ 1.5 degrees Celsius is actually a 2-degree rise for some nations, with dire climate-related impacts.”

“The week was a roller coaster of thoughts,” says Anthony Fratto Oyler, another TPP master’s student, who is a research assistant with the MIT Energy Initiative. Since the seventh grade, he’s dreamed of coming to the climate conference and seeing negotiations firsthand. “During the week, I was struck by the severity of what we are facing, and as a young person, you can feel disheartened and small.”

“It’s difficult to imagine countries coming together to a solution when they can’t even agree on a single sentence for a guidance document,” he says. “More so when you realize the inspirational, progressive, and pragmatic leaders that came together to sign the Paris Agreement three years ago are no longer there and in some countries’ cases have been replaced by leaders who refuse to accept facts of climate change.”

Erik Landry SM ’18, has also found the conference eye-opening: “In some sense, the tone of the talks has been disconcerting, but this is balanced by a powerful feeling of inspiration and empowerment that you can see from extremely innovative and creative individuals and organizations presenting their initiatives here at the conference.” Landry, a research associate in the Office of the Vice President for Research, is at the conference to advance his research on climate finance and to bring back insights that could help MIT as the Institute continues to advance its own climate action plan.

Davuluri and Oyler have found reasons for optimism as well.

“I loved hearing passionate people from developing countries and climate activists from small towns in the U.S., and getting the opportunity to have one-on-one interactions to hear their stories,” says Davuluri, who enjoyed attending sessions with fellow researchers and having meetings with policymakers including the head of the Council on Energy, Environment, and Water, a global think tank based in India.

“By the end of my time I ultimately felt hopeful,” says Oyler. “It’s inspiring to know there are tens of thousands of individuals from all the world working through research, policy, leadership, and other avenues to address climate change.”

At the event, Sergey Paltsev, a senior researcher at the MIT Energy Initiative and deputy director of the MIT Joint Program on the Science and Policy of Global Change, shared takeaways from new research on climate policy and technology pathways for nations to meet their Paris Agreement targets. The findings were drawn from analyses of selected Latin American nations and member countries of the Association of Southeast Asian Nations, as well as best practices and lessons learned from these and other governments.

Michael Mehling, deputy director of MIT’s Center for Energy and Environmental Policy Research, has been speaking at a number of events on carbon markets. “Economists widely agree that putting a price on carbon is the most cost-effective way of dealing with the externalities that cause climate change,” he says. At COP24, Mehling has been discussing collaborative emissions reduction options for governments through a provision of the Paris Agreement, Article 6.

He explains, “Article 6 of the Paris Agreement contains an option for countries to cooperate across borders, voluntarily, by transferring mitigation outcomes. That allows one jurisdiction to meet its climate pledges with mitigation efforts achieved in another jurisdiction.” Using this option, countries can collaborate by buying and selling emission reductions across national borders — which can dramatically reduce the cost of achieving collective mitigation targets compared to countries acting on their own. That, in turn, should enable countries to increase the ambition of their climate efforts, but it also requires observing certain safeguards.

Mehling’s research, outlined in a new paper, provides guidance for the governance of such cooperative approaches, to ensure transparency, accurate accounting, and environmental integrity while minimizing transaction costs and maximizing participation.

Raising others’ voices and building capacity for climate resilience

Kathleen Kennedy, executive director of MIT’s Center for Collective Intelligence (CCI) is at COP24 as part of a collaborative effort between CCI’s Climate CoLab and the U.N. Climate Resilience Initiative A2R to empower communities to become more resilient to climate-related risks and impacts. Kennedy moderated a discussion at the conference with winners of a recent contest organized through the collaboration, which asked communities to propose local solutions to their climate challenges. 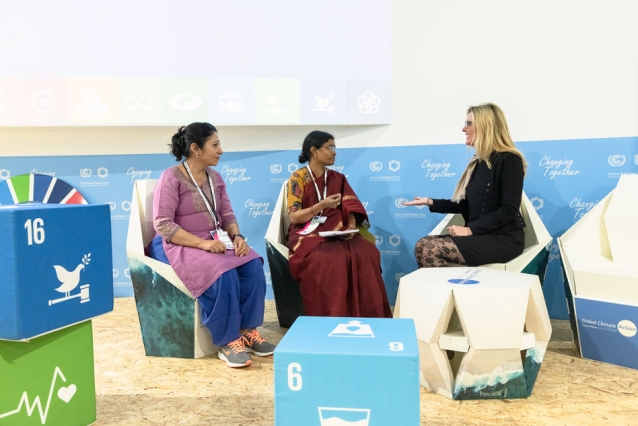 Kathleen Kennedy (right), executive director of MIT’s Center for Collective Intelligence, moderated a discussion with winners of a recent contest organized with Climate CoLab, that asked communities to propose local solutions to their climate challenges. The winners are from the Mahila Housing SEWA Trust in India, which empowers women in impoverished communities that are vulnerable to climate change by devising a community-based microinsurance system to manage climate risks. Credit: Emily Dahl, MITEI

“How can at-risk communities around the world absorb climate change issues so they don’t get completely devastated by a hurricane, a cyclone, or floods? How do they build the capacity to deal with these risks? We had two different winning groups that brought very innovative solutions,” she says. On the panel, Kennedy talked with representatives of the two winning projects — one from Nepal, the other from India, and both led by women — in which each shared how they had used existing systems in their communities as the basis for new climate initiatives.

Providing a way for communities to make these contributions to climate action is essential, she says. “We need to be able to get deeper into the communities, and hear the voices of those on the ground who are experiencing issues related to climate change. The Climate CoLab is a really powerful platform that is able to reach into different communities and help the people who are actually experiencing the challenges put their proposals on the platform, then work collaboratively with people around the world on finding solutions.”

Preparing for the future

Oyler is thinking ahead to how he can translate his experience at the conference into future work. “Rather than feeling burdened by the amount of effort needed to decarbonize our society, I feel empowered by my ability to at least try and build a better future,” he says.

Participating in the conference has also helped Davuluri think about her own career path.

She says, “COP24 really motivated me to focus on the local and state level — particularly the state of California. I think I could bring my engineering, economics, and policy background to help the state reach its zero-carbon targets in a sustainable, low-cost, and equitable way that does not hurt marginalized communities.”

“I was impressed by the number of young participants in this event. The current policies and actions determine their future; therefore, it is tremendously important to reflect the views of those who will be especially affected by action or inaction by policy makers,” says Paltsev, who led MIT’s delegation. “The urgency of climate tasks requires accelerated solutions, and people can make significant difference by actively participating in climate actions.”

Landry reflects, “Having grappled with the qualitative aspects underlying a lot of the issues being discussed throughout my time at MIT, I now have a level of confidence and understanding of the issues that allows me to contribute to conversations here. For me, this experience has reaffirmed the importance of our commitment to rigorous research at MIT and the necessity of sharing our work and engaging in dialogues with stakeholders around the world.”

As COP24 nears its end, conference president Michał Kurtyka, state secretary in the Ministry of Energy in Poland, has echoed Espinosa’s call to governments for action. It’s a charge relevant for MIT researchers and citizens around the world as well: “It’s now time to move forward. The issues that are left do not benefit from time. Climate change will not wait for us.” 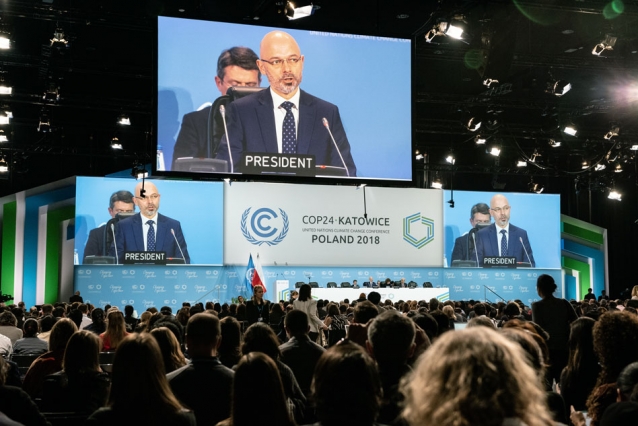 “It’s now time to move forward,” said Michał Kurtyka, president of the COP24 conference and state secretary in the Ministry of Energy in Poland. “The issues that are left do not benefit from time. Climate change will not wait for us.” Credit: Emily Dahl, MITEI 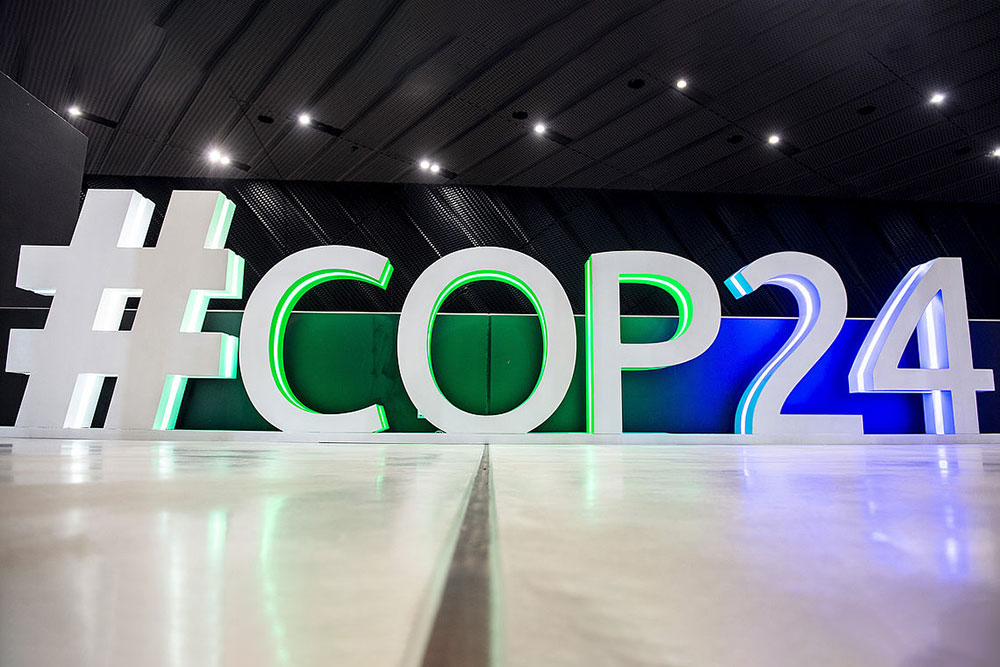