Changing the game: Building MIT’s capacity for a sustainable future

It was an event “choreographed in true MIT fashion,” stated Julie Newman, director of MIT’s Office of Sustainability. This meant that the Institute’s March 2 conference, SustainabilityConnect, was emphatically multidisciplinary and designed to promote systems thinking. From the wide range of campus presenters and panelists to the paper-free, real-time, online agenda, the daylong forum signaled its singular purpose: to make MIT a game-changing force for sustainability in the 21st century.

On the job for 18 months, Newman has been assessing the Institute’s standards, practices, and aspirations related to energy and the environment; synthesizing input from a multitude of sustainability stakeholders, including the MIT Energy Initiative, the MIT Environmental Solutions Initiative, and the Climate Change Conversation; and convening new campus working groups—in such arenas as design and construction; waste, stormwater, and land management; and green laboratories. Faced with the task of drafting recommendations, Newman proposed to bring together key players from across MIT in the belief, she said, that “innovation emerges from collisions.”

This gathering came at a critical moment for MIT, as Israel Ruiz, executive vice president and treasurer for the Institute, explained to attendees. “We are in one of the largest construction periods MIT has ever undertaken, and it is an opportune time to think what the campus should look like in 2025 and beyond,” he said. There are billions of dollars at stake, not just in new construction but in deferred maintenance for the old buildings. “The elephant in the room is the age of the campus,” noted Tony Sharon, MIT deputy executive vice president, who is in charge of this capital renewal. “There is a huge opportunity here, but we don’t have the right metrics for sustainability.”

To that end, SustainabilityConnect invited approximately 125 staff, faculty, and administrators to share their expertise and to discuss the most effective ways of improving and reinventing the systems that make MIT run—such as the energy mix that powers buildings, the flow of materials through campus via procurement and waste management, and the ways in which people move to, from, and around campus. The conversations also covered the imperative to collect meaningful data and measure outcomes, set aggressive policies, assess risk and strengthen resilience, and work cooperatively with neighbors in Cambridge, Boston, and beyond. MIT could serve as a living laboratory for innovative, proven sustainable strategies, suggested Newman, ultimately scaling up its solutions to make a global impact.

Judging from the testimony of panelists, the Institute already has begun pushing the edge on key sustainability issues. For instance, construction is just beginning on MIT.nano, a research and fabrication facility that—like most laboratories—is particularly energy intensive. The project’s director, Vladimir Bulović, the Fariborz Maseeh Chair in Emerging Technology and associate dean for innovation, said he would like this center, which will host up to 2,000 researchers, to “show the best paradigm and practices.”

His team identified more than 100 different sustainability options, such as bigger air purifying filters that require fewer air exchanges per hour and less energy to operate, and a means of reutilizing heated air. Running the numbers, Bulović noted, demonstrates that it is possible to recover any additional costs for sustainable measures quickly and that there are “even extra energy savings after point of payback.” Look around campus, advised Bulović, and “you’ll recognize a tremendous number of opportunities” for energy savings. 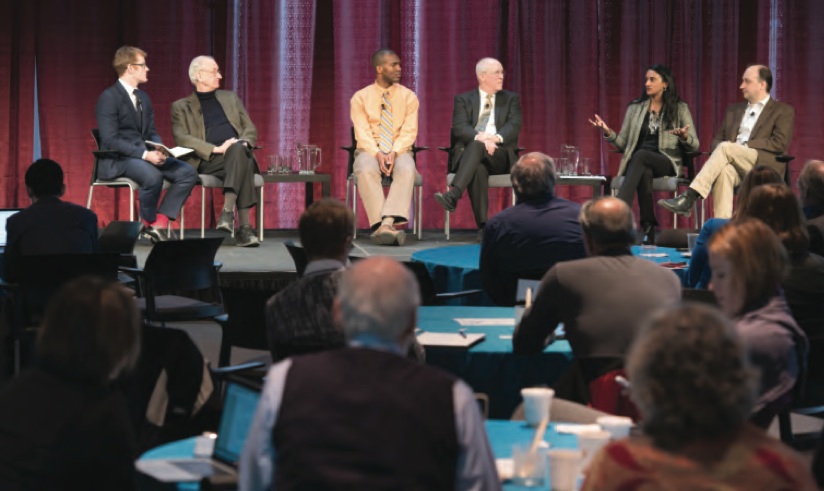 Such opportunities might include new energy sources. Another speaker, Jeremy Poindexter, a second-year PhD student in materials science and engineering, described a class project that identified campus rooftops with “the potential for providing up to 4 megawatts of solar capacity…and these are buildings where we could install solar systems immediately without the need for any serious retrofit work.”

Speakers also addressed critical issues of risk and resilience. Nathalie Beauvais, a project manager with Kleinfelder Associates, is developing a comprehensive assessment of climate change vulnerability for the City of Cambridge. She projected an enhanced threat of flooding on the MIT campus due to increased precipitation between now and 2030. This risk, she said, along with the likelihood of more frequent extreme heat events, suggests that MIT should look now for ways to protect infrastructure, especially vital systems such as its power plant.

These kinds of vulnerabilities are shared with Kendall Square and other parts of Cambridge, noted Henry Jacoby, William F. Pounds Professor of Management Emeritus, Joint Program on the Science and Policy of Global Change. “This is a game we need to be in, not just for ourselves but to support our communities,” he said. “The campus is really the city, because we don’t survive, or sustain, unless the city we’re in sustains as well.”

James Wescoat, Aga Khan Professor in architecture, pointed out that disaster resilience could be more than just a risk-management or building-design question but “rather a visionary principle for campus planning.” He suggested it might be useful to broaden the concept of resilience to include ecosystem and psychosocial well-being. In particular, he noted “enormous opportunity for the outdoor campus, the environment outside of buildings, to become a great laboratory.” 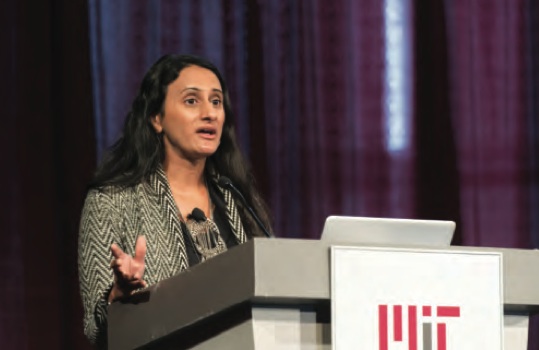 Bina Venkataraman, former senior advisor on climate change innovation for the Obama administration and now at the Broad Institute, said that MIT could inspire and empower communities and companies by modeling new technologies and innovations at scale. Photo: Justin Knight

Since MIT stands at the intersection of research and practice, Bina Venkataraman, director of global policy initiatives at the Broad Institute, said that MIT could help originate a marketplace for climate change risk information and also model new technologies and innovations at scale. Such a venture might really inspire and empower communities and companies to make constructive decisions around policy and to prepare for a changing environment. “MIT can and should evolve the role of scientists and campus operations to develop a clinical practice for climate change,” she said.

In workshops, faculty, students, and administrators wrestled with ways to integrate sustainable principles and practices into the fabric of MIT. Many warmed to the idea of organizing a hackathon and competitions to spur new approaches to campus energy innovation. Some groups wanted to set guidelines for new and renovated buildings to ensure their survival in 10-year storms. Others suggested using sensors and digital technology to create real-time data feeds on air quality, energy use, and water use—available to the entire MIT community—to track progress and to help people make decisions that address climate change.

Some groups targeted the creation of a sustainable campus by seeding an urban canopy, capturing stormwater for reuse as gray water, and launching a community farm with compost generated onsite. “One thousand flowers blooming is the nature of a living lab,” said Jason Jay, senior lecturer and director of the Sustainability Initiative at the MIT Sloan School of Management. It will be hard to know “all the cool stuff going on, so we should have a way of accumulating this learning and institutional memory.”

In the coming months, the Sustainability Office will begin channeling these ideas into a set of recommendations for the newly appointed Sustainability Task Force, a group of faculty, students, staff, and representatives from key administrative areas who will together shape the vision and plan of action for campus sustainability at MIT. “We think of it as mapping components together, providing a systems response,” said Newman, “because making decisions through a sustainability lens means integrating questions of energy, transport, stormwater and land management, design, construction, procurement, and materials.”

These are questions she believes the Institute will revisit frequently over time. But, she says, “I feel reassured after this forum that we have the ability not only to embrace complexity but to think collectively and creatively — just the kind of capacity-building we need as we embark on the long-term commitment to sustainability.” 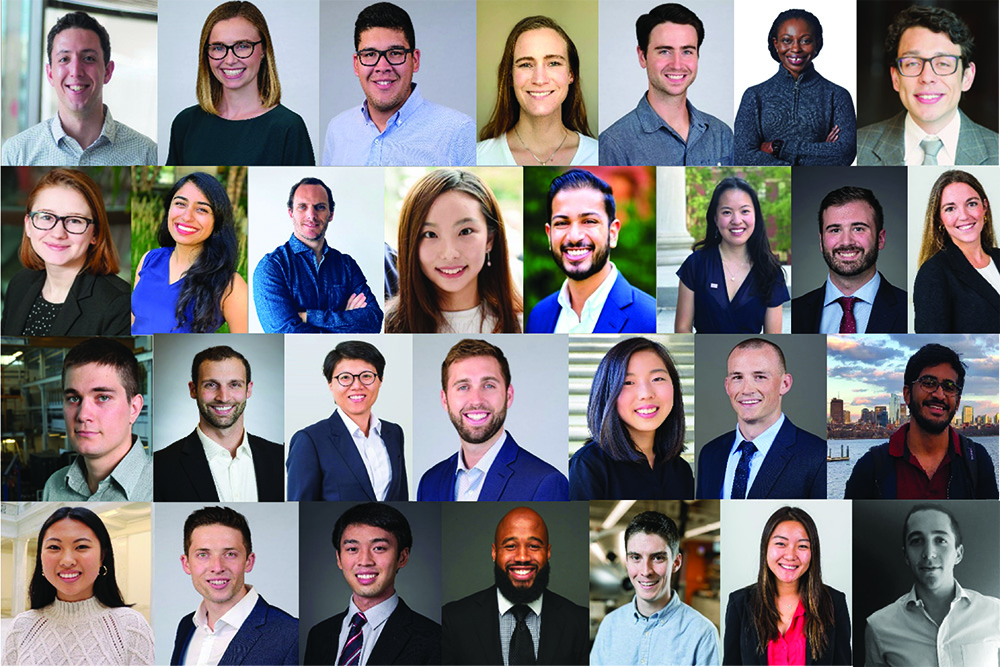