Chemical engineers and biologists at MIT have found a simple way to make yeast produce more ethanol from sugars: Spike the mixture they’re growing on with two common chemicals. Adding potassium and an acidity-reducing compound helps the yeast tolerate higher concentrations of the ethanol they’re making without dying. Aided by those “supplements,” traditionally underperforming laboratory yeast made more ethanol than did industrial strains genetically evolved for ethanol tolerance. The supplements also enabled lab yeast to tolerate higher doses of high-energy alcohols such as butanol, a direct gasoline substitute. In other “firsts,” the researchers described the mechanism by which alcohols poison yeast; they defined two genes that control ethanol tolerance; and they modified those genes in lab yeast to make them out-produce the industrial strains—even without the supplements.

Manufacturers worldwide rely on yeast to convert sugars from corn or sugar cane into ethanol, a biofuel now blended with gasoline in cars and trucks. But there’s a problem: At certain concentrations, the ethanol kills the yeast that make it. As a result, a given batch of yeast can produce only so much ethanol.

“The biggest limitation on cost-effective biofuels production is the toxic effect of alcohols such as ethanol on yeast,” says Gregory Stephanopoulos, the Willard Henry Dow Professor of Chemical Engineering. “Ethanol is a byproduct of their natural metabolic process, as carbon dioxide is a byproduct of ours. In both cases, high doses of those byproducts are lethal.”

Five years ago, Stephanopoulos; Gerald Fink, MIT professor of biology and a member of the Whitehead Institute for Biomedical Research; and Felix Lam, postdoctoral associate in chemical engineering, began looking at this problem. How could they make yeast resistant to higher concentrations of ethanol? 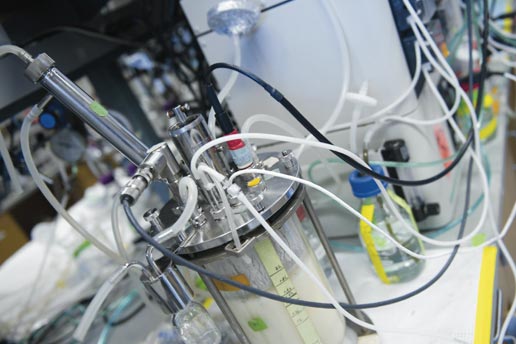 To explore their novel concept, the researchers ran many parallel experiments in which they cultured laboratory yeast on defined glucose media, some with no supplemements and others with supplements added, either singly or in various combinations. They then replicated the most promising combinations in this laboratory-scale bioreactor, a device that mimics the conditions inside industrial-scale fermenters. Photo: Stuart Darsch

Previous efforts involving genetic engineering had proved unsuccessful. “Ethanol tolerance is one of those traits that’s sort of mysterious,” says Lam. He offers the analogy of diabetes. “People know that it’s not one gene that says you’ll be susceptible to diabetes or not. It’s a multitude of genes,” he says. “Altering a single gene has not prevented diabetes—or made yeast more ethanol-tolerant.”

Results from those earlier genetic engineering efforts did, however, give the researchers an idea. Certain yeast that were somewhat ethanol-tolerant showed high activity in genes related to phosphate utilization. So they tried growing yeast on the standard lab medium, but to some cultures they added potassium phosphate, a compound readily available in their lab. The jump in ethanol production was dramatic.

Figuring out why proved challenging. Initially, the researchers focused on the phosphate. After all, phosphate is an essential micronutrient for all living things; and Lam knew well the importance and workings of phosphate metabolism from previous research. But the boost in ethanol production persisted even when they used genetic methods to disable phosphate metabolism in the yeast. In contrast, when they replaced the potassium in the potassium phosphate with sodium, calcium, or ammonium, the positive impact essentially disappeared.

Both outcomes were surprising. Potassium, calcium, and ammonium are all critical to the nutrition and functioning of living cells, so what made the potassium special? And what about the phosphate? After much testing, they realized that the change wasn’t due to metabolic processes—or any processes—occurring inside the cell. The impact of the potassium on ethanol tolerance occurred too quickly for cells to be mounting a biological response. And further testing showed that the role of the phosphate, a natural pH buffer, was simply to reduce the acidity of the mixture. “It had little to do with the biology inside the cell but rather more with the chemistry outside it,” says Lam. Experiments confirmed their reinterpretation: Just adding potassium and reducing acidity—with no phosphate present—gave the same remarkable boost in ethanol production. 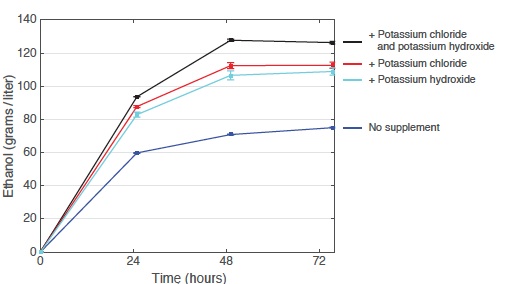 These curves show ethanol production from laboratory yeast growing on glucose for 72 hours. Adding either potassium chloride (to increase potassium) or potassium hydroxide (to reduce acidity) pushes up ethanol output significantly from the baseline with no supplements. Adding both chemicals together boosts ethanol output by 80%. 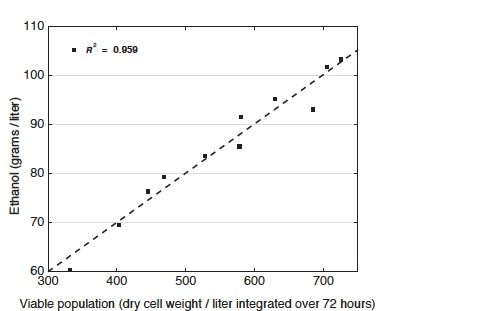 A series of experiments demonstrated the effectiveness of this approach.To retain commercial relevance, the researchers mimicked conditions typically seen inside industrial biofuel fermenters: They used a high density of yeast cells growing on a high concentration of glucose—the simple sugar extracted from corn or sugar cane. As their supplement, they used potassium chloride to add more potassium and potassium hydroxide to alter the acidity. And to challenge their method, they used an inbred laboratory strain of yeast known to be particularly sensitive to ethanol.

The curves in the top figure at the right show ethanol production from a single culture growing for 72 hours under four conditions: on the standard laboratory medium with no supplement (blue); with added potassium chloride (red); with added potassium hydroxide (light blue); and with both potassium chloride and potassium hydroxide (black). Each supplement pushed up ethanol output significantly, and adding the two together brought an increase of 80%. Moreover, in the latter case,the yeast consumed essentially all of the available glucose.

Further examination showed that the elevated potassium plus reduced acidity results in an increase in cell viability and thus in ethanol productivity. Indeed, raising potassium and reducing acidity gradually brings about increases in the viable cell population—changes that lead to corresponding increases in ethanol production, as shown in the bottom figure at the right. “So the ability to endure toxicity is a principle determinant of ethanol output—and it’s the primary trait strengthened by our supplements,” says Fink.

The researchers note that adding the supplements slightly stimulates the growth of the initial batch of yeast so that there are actually more cells in the culture over the three days. But the largest boost—by far—comes from individual cells being able to withstand higher levels of ethanol. “The per-cell production rate hardly changes, but the cells stay alive much longer; and the longer they live, the more ethanol they make,” says Lam.

The tests described so far involve the ethanol-sensitive lab strain of yeast. But yeast strains used commercially are carefully selected for their genetic predisposition toward ethanol tolerance. So the researchers decided to see how the performance of their lab yeast compared with that of several commercial strains—and how adding the supplements would affect the productivity of the commercial strains.

Impact of supplements on ethanol production from various yeast strains 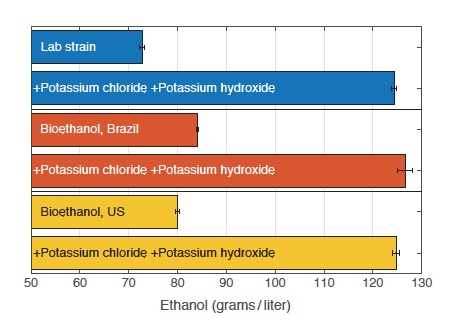 This table shows ethanol production from standard lab yeast and from yeast strains used in bioethanol production in Brazil and in the United States. In cultures grown under unsupplemented conditions, the commercial strains produce more ethanol than the lab strain does. However, when assisted by the supplements, the lab strain produces far more ethanol than the commercial strains do. When all three receive the supplements, the ethanol yields are comparable. Thus, adding the supplements to the growth medium influences ethanol output more than do any genetic differences among the yeast strains.

Encouraged by their results, the researchers decided to apply their methods to other issues encountered in biofuels production. For example, commercial yeast are good at fermenting glucose; but they cannot deal with xylose, an important constituent in cellulosic sources such as corn stover and switchgrass. When they grew a specially engineered lab strain on pure xylose and added the supplements, the ethanol yield jumped by more than 50%—a result consistent with the complete consumption of xylose.

Another challenge is to make fuels that are better suited than ethanol to today’s transportation needs. “Everyone knows that ethanol is ultimately a pretty lousy fuel,” says Lam. “Butanol, for example, has a higher energy content per liter; and unlike ethanol, it can be used as a direct substitute for gasoline in today’s cars.” Such high-energy alcohols are even more toxic to yeast than ethanol is, but the researchers found that the boost in tolerance extended to such alcohols as well. Both the lab and industrial strains were able to withstand higher concentrations of butanol when aided by the supplements.

The researchers believe that their findings reveal the mechanism by which ethanol and other alcohols kill yeast at levels relevant to biofuel production. Critical to the survival of any living cell is an electric potential across its external membrane, which gives it the energy it needs to bring in nutrients and expel wastes. That potential is created by electrochemical gradients, which are differences in concentrations of ions (electrically charged particles) inside and outside the cell.

A yeast cell maintains two primary gradients: Concentrations of potassium ions are high inside the cell and low outside; and concentrations of protons—the hydrogen ions that determine acidity—are low inside and high outside. Two “pumps” in the membrane move those materials in opposite directions: One pulls in potassium ions, and the other pushes out protons. Since both potassium ions and protons are positively charged, the gradients are coupled. The interior of the cell must be electrically neutral and remain that way; thus, when a potassium ion comes in, a proton goes out.

Based on their experimental evidence, the researchers propose the following “toxicity mechanism.” At concentrations achieved in biofuel production, alcohols do not dissolve the yeast’s cell membrane but rather make it porous. The small holes in the membrane allow potassium to leak out and protons to leak in, thereby dissipating the critical gradients. The potassium and proton pumps work hard to maintain the gradients; but as leakage increases, the pumps can’t keep up, the gradients collapse, and the cell dies.

If that toxicity mechanism is correct, then increasing the strength of the two pumps by genetic engineering should help. Indeed, using yeast with genetically augmented pumps but no added supplements pushed ethanol production up by 27%—not as high as the level reached with unaltered yeast plus the supplements, but still higher than the levels reached with the Brazil and US commercial strains.

Thus, their targeted genetic changes worked better than the “survival of the fittest” genetics that typify commercial strains. Moreover, the effectiveness of the genetic modifications alone—in the absence of the physical supplements— supports the researchers’ hypothesized toxicity mechanism and suggests that they have for the first time isolated genes responsible for ethanol tolerance in yeast.

The researchers already have pushed up ethanol productivity from the levels reported here. In addition, they have promising initial results showing production increases from samples of mixed raw materials actually used in industrial fermentations. And they are looking more closely at the impacts of combining their two approaches— chemical supplementation and genetic modification.

The technical and economic effectiveness of the supplementation strategy will, of course, depend on its performance at large scale and in an industrial setting. If larger-scale laboratory or pilot-plant tests take place and are successful, Lam notes that it should be relatively easy to implement the approach at existing bioethanol plants: Just increase potassium levels and control acidity inside the bioreactor. Given the already high performance of certain industrial yeast strains, making those changes could bring even more dramatic increases in the production of ethanol—and perhaps second-generation biofuels such as butanol—than have been demonstrated in the lab.

This research was supported by the MIT Energy Initiative Seed Fund Program, the US Department of Energy, and the National Institutes of Health. Further information can be found in: