Three new initiatives at MIT are taking aim at energy savings from multiple directions. The goal: saving tens of millions in energy costs, reducing the Institute’s carbon footprint, and forging new partnerships that encourage and reward strategic energy use. So far, the new programs are all hitting their targets.

Massachusetts gas and electric utility NSTAR and MIT have embarked on what the utility has dubbed its most aggressive efficiency project to date.

The MIT Efficiency Forward program aims to save up to $50 million in energy costs over a period of 10 years. Upgrades to heating, ventilation, and air conditioning (HVAC), electrical systems, and lighting are expected to set the stage for the long-term savings by cutting electrical use by 15% over the next three years.

“What we are launching with MIT is a bold new plan for confronting climate change and a proposal to officially establish energy efficiency as the ‘first fuel’ in Massachusetts,” said NSTAR president and CEO Tom May when the initiative was announced in spring 2010. 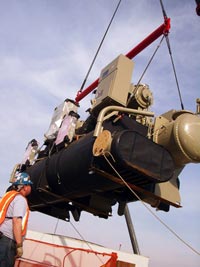 MIT’s chiller plant expansion has added two 2,500-ton high-efficiency chillers in otherwise unusable space over a railroad right-of-way. Here, one of the chillers is lowered into place by a 600-ton crane. Photo: courtesy of Bond Brothers

MIT’s goal over the next three years is to conserve 34 million kilowatt-hours (kWh)—the equivalent electrical use of 4,500 Massachusetts homes in a year. MIT’s current average electricity consumption is around 18 million kWh per month. The Institute is making rapid progress toward this year’s goal of saving 10 million kWh. To date, the Institute has saved 7.7 million kWh through its Efficiency Forward program, including completion of several new lighting retrofit projects in buildings in the northwest section of campus; the completion of several new building projects, including the Sloan School of Management building; a chiller plant expansion; and other projects that include efficiency enhancements.

“We have over 2 million kilowatt-hours of projects in the planning stage, and we expect to meet or exceed our 2010 goal,” said Walter E. Henry, director of the systems engineering group for the Department of Facilities. The $50 million in savings will be achieved over the lifetime of the projects, NSTAR and MIT said.

According to Steven M. Lanou, MIT’s deputy director for environmental sustainability, lighting retrofits are expected to contribute about half the savings and new construction features about 20%. Improvements to HVAC and cooling and compressed air systems—as well as behavior change measures—are expected to round out the balance. The company will work with MIT to conduct HVAC, electrical, and lab systems improvements, and lighting fixture and control upgrades, in addition to other steps.

Several factors made MIT an especially promising partner for NSTAR, according to Lanou. Among those factors are a newly established revolving fund for campus energy and efficiency projects; a set of pilot projects established last year; and a disciplined, long-term energy management program with a robust measurement and verification component for energy savings.

With a $1 million gift from Jeffrey Silverman ’68 in April 2009, the Institute established the Silverman Evergreen Energy Fund to support campus energy and efficiency projects that have rapid paybacks. David Desjardins ’83, a consultant and investor who is also passionate about campus energy issues, has since donated an additional $500,000 to the effort.

To date, the fund has paid to upgrade the lighting systems in the Ray and Maria Stata Center for Computer, Information, and Intelligence Sciences, as well as in the Stratton Student Center. The two projects required a combined investment of nearly $600,000 and have resulted in estimated annual savings of about $185,000, meaning they will have paid for themselves after about three years.

In addition, the Silverman fund allocated $430,000 to recalibrate and improve the efficiency of the nearly 200 fume hoods in the Dreyfus Chemistry Building (Building 18). Fume hoods are energy-intensive ventilation devices that protect researchers from chemical fumes. They work well at lower flow volumes, saving about $160,000 annually.

The ups and downs of megawatts

In 1995, MIT installed a natural gas-fired cogeneration plant that provides electricity, steam heat, and chilled water to more than 100 campus buildings. By generating much of its own power, MIT cuts costs and reduces pollution, but operating the plant requires a decision-making process similar to that used in running full-scale utilities.

The cogeneration facility provides 21 megawatts of electricity plus heating and cooling to meet about 75% of campus energy needs. For the remaining 25%, MIT buys electricity from NSTAR. But with energy prices constantly fluctuating, it can be difficult to figure out when it’s more cost-effective for MIT to buy electricity from the grid or to produce its own.

Enter ICETEC, Industrial/Commercial Energy Technologies. Earlier this year, MIT contracted with the Pennsylvania-based company to test a service and software package designed to increase the plant’s effectiveness and manage the economic risks associated with being your own utility.

ICETEC has provided MIT with a computer server through which people like plant engineer Seth Kinderman connect through a web interface that presents graphed data from multiple sources. Using data from the plant’s own control center, it shows how many megawatts the plant is producing, which chillers are running, and the current load. It predicts how the weather may boost electricity costs, stress the grid, and create congestion in energy delivery.

“If it’s going to get hotter, consumers are going to use more electricity, and costs are going to go up,” Kinderman said. “ICETEC makes recommendations to us on how we should run the plant.

“Before, we had to run the turbine on the highest output—set it and forget it, so to speak. If the campus load dropped, we produced less. If it went up, we produced more.

“But there is a huge variation in electricity prices. A megawatt-hour could cost $300, $30, or $5, depending on demand and time of day or night. The ICETEC software tells us when to produce more or less, whether it’s cheaper to make chilled water for air conditioning using steam or electricity. If electricity prices are high, we run all steam. It sets up a kind of batting order for the chillers, so we use the most cost-effective unit first, and so on.”

“Because it tells us which unit is most efficient to run, the system saves MIT energy as well as money,” he said.

ICETEC’s real-time monitoring of energy prices and load levels on campus and in the region helps dictate when MIT should run the cogeneration plant and when to buy power from the grid for maximum efficiency. The numbers are not yet in, but the collaboration looks promising. ”We knew historically what we would have done in a particular month. Rough numbers are showing significant savings since we partnered with ICETEC,” Kinderman said.

Moving beyond campus, MIT has signed on to pilot a new public-private partnership aimed at cutting energy use and greenhouse gas emissions at industrial and commercial facilities—including academic institutions—around the world.

Initially, MIT will join eight companies to pilot the program, which emerged from the Clean Energy Ministerial public forum held in Washington, DC, in July hosted by US Department of Energy Secretary Steven Chu. Corporate leaders and more than 26 energy ministers and secretaries of energy from around the world attended, and many spoke at the event, which launched the partnership called the Global Superior Energy Performance (GSEP) Partnership.

Through GSEP, institutions such as MIT can win global certification and recognition by adopting approved energy management systems. The goal is to achieve significant and independently validated efficiency improvements over time.

GSEP certification will be piloted in commercial buildings by Cleveland Clinic, Grubb & Ellis Co., Marriott International Inc., Target, and Walmart; in industrial facilities by 3M Co., Nissan, and Dow Chemical; in public buildings by the United States and Canada; and in an educational setting by MIT.

“To achieve certification, institutions and industry must implement an energy management standard to identify pathways to reduce energy use,” said Henry. GSEP-certified facilities also need to demonstrate a level of energy performance improvement that exceeds business-as-usual levels. What’s more, reaching their targets will need to be validated by an accredited third party.

“MIT’s being selected by Secretary Chu and the Department of Energy as the only university invited to help develop this new international energy performance standard, as well as our partnership with NSTAR, speaks volumes about the leadership position MIT is establishing in campus energy management,” said Lanou. “It is our goal to share our experience through this program and our other activities to show other universities what is possible.”