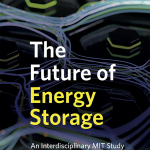 11:00 am ET     Materials for energy storage
Watch the recording.