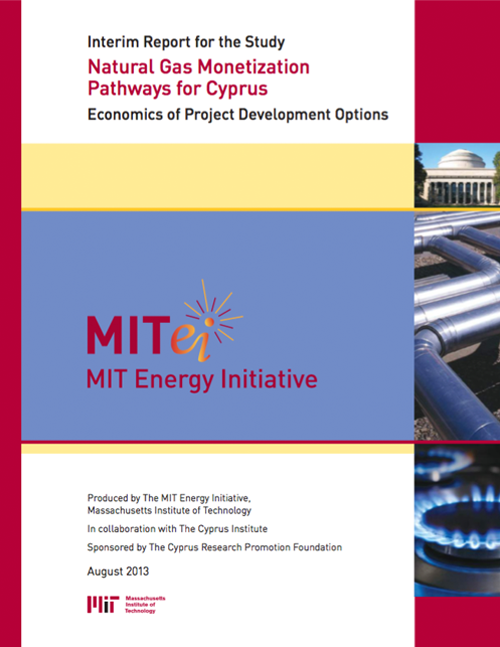 This study is an interim report on the economics of natural gas project development options in Cyprus. It is a part of the overall study on natural gas monetization pathways for Cyprus. The full study is expected to be released in 2014.

This research is sponsored by The Cyprus Research Promotion Foundation

Acknowledgments
Thanks are due to Henry Jacoby, Charles Ellinas, Rebecca Marshall-Howarth, Fannie Barnes, and the personnel of the MIT Joint Program on the Science and Policy of Global Change for their valuable contributions. The report authors would also like to thank Ernest Moniz and Melanie Kenderdine who were instrumental in the initial phases of this project prior to their leaving MIT in May of 2013.

In 2007, MIT signed an agreement with the Government of Cyprus to aid in the development of The Cyprus Institute (CyI) Center for Energy, Environment, and Water Resources through human resource development and joint research. Since its inauguration, MIT and CyI researchers have been working together on initiatives of importance to the Mediterranean island nation and the region with the focus on water, energy, and climate change.

Cyprus faces serious shortages of both drinking water and energy and the nation uses fossil fuels to power water desalination, so the two problems are intertwined. A major joint research project has therefore been investigating the use of concentrated solar power to produce both electricity and desalinated seawater. Analysis has shown that this novel cogeneration concept is technologically viable in Cyprus. Among the concepts coming out of this work are an innovative storage system, installation of heliostats on hillsides, and an advanced-design desalination system.

During the past two years, a deep budget problem in Cyprus led to a slowdown of the project with three projects selected for 20122014 extension of the original five-year agreement. The projects involve underground exploration which has strong implication for gas and oil exploration offshore of Cyprus, technologies for joint production of solar energy and desalinated water, and a study on natural gas monetization options for recent gas discoveries offshore Cyprus. All three projects deal with the theme of Energy, Environment, and Water Resources.

The funding for this study is provided solely by The Cyprus Research Promotion Foundation. While Eni S.p.A. and Total are members of MITEI and have exploration interests in Cyprus as described in the report, they have not contributed to any input, output, or funding related to this research. The views and opinions expressed in this report are those of the authors.