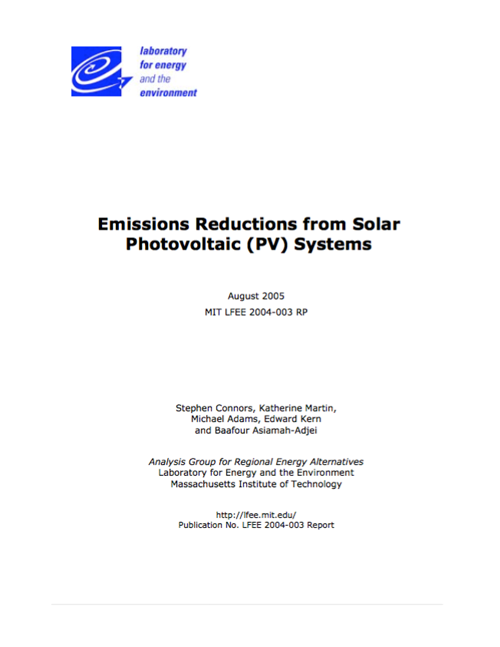 Electricity generated from renewable resources, especially sun and wind, are attractive since they are non-polluting, particularly on an air emissions basis. However, the amount of pollutant emissions they avoid by reducing centralized fossil generation is highly variable. This project focused on the determination of avoided emissions resulting from solar photovoltaic (PV) generation across the contiguous forty-eight United States, using historical PV and/or solar insulation data, coupled with hourly electricity demand and fossil unit operation and emissions data.

The majority of PV systems deployed in the USA in recent years are grid- connected, customer sited systems. There are significant daily and seasonal variations in the solar resource, and therefore how much electricity is generated by a PV system varies by time of day, time of year, and weather conditions (cloudiness, temperature, and wind). Additionally, different power systems have different mixtures of coal, oil, natural gas and other centralized generation sources. Individual fossil generators may be used more during different times of day or year, and may use different fuels in certain seasons. Therefore, avoided emissions from PV must be calculated on both an hourly and regional basis, consistent with both solar resource and power system fossil unit control and dispatch.

The emissions reduction potential of a grid-connected PV system depends more on the characteristics of the regional electricity system than on the available solar resource. A detailed analysis of historical PV generation, fossil generation, and fossil emissions data for each region reveals that it is characteristics of a regional electricity system, like fuel portfolio and demand pattern, that determine the magnitude of emission reductions.

The use of PV systems lowers the electricity demand seen by a regional grid. Broadly speaking, the units that are affected by PV generation are those units that are following variations in regional load. To quantify the PV systems emission reductions, the question that must be asked is: Which specific fossil generating units are affected by the reduction in demand and what are the emissions characteristics of those units? Another question is: Does PV generation in a particular region reduce generation from the above average or below average polluting fossil units (i.e. the coal-fired units or the natural gas-fired units), and how does that change from season to season, when natural gas prices are high, or when less non-fossil generation (nuclear and hydro power) is available?

This analysis empirically determined the fossil units that were offset by PV generation in each region and in each hour for the years 1998 through 2002. PV systems only generate power during daylight hours and the analysis found that PV systems often reduced emissions from natural gas peaking units because they are used in many regions to meet peak (usually daytime) electricity demand.