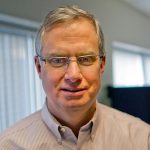 Tom Melville joined MITEI as communications director in April, 2021. Before joining MITEI, he spent nine years at Boston’s NPR news station, WBUR, leading the largest public radio station newsroom in the United States. He directed reporting teams covering politics, the environment, healthcare, education, the arts, business/innovation/technology and investigations. He joined WBUR as executive editor of content in 2011, was promoted to news director in 2013 and to executive news director in 2015. Before joining WBUR, he was news director at the nation’s largest regional news channel, New England Cable News (NECN). At NECN, Melville rose through the ranks from reporter to executive producer and to assistant news director before being named news director in 2008. He was executive producer and co-writer of an NECN documentary film on hospice care, “Look for Me Here: 299 days in the life of Nora Lenihan,” which won more than a dozen regional, national and international awards, including the George Foster Peabody Award.

He began reporting the news at a radio station in his native Newton, Massachusetts when he was 16 years old. He covered sports at the Boston Herald-American while an undergraduate at Boston University. He served in the United States Peace Corps in the Dominican Republic, teaching vegetable gardening in the public schools in the town of El Valle. He is a graduate of Boston College Law School and holds a law license in Massachusetts.