MIT students had to polish their prose in 8.21 Physics of Energy this year, as the science foundation class for the Energy Studies Minor became a communication-intensive (CI) subject.

“This class gives students a chance to learn to write in a particularly effective way if they’re interested in energy issues,” says Robert L. Jaffe, the Jane and Otto Morningstar Professor of Physics, who teaches the class. “We hope we’re educating the person who can advise the policymaker on issues of science or hold their own in policy as well as technical discussions with experts outside their own fields.”

Offered since 2008, 8.21 introduces the fundamental physics of energy systems with an emphasis on quantitative analysis. Historically, the subject has been conducted as a typical physics class, with a workload of problem sets and exams. This year, however, the Department of Physics was looking for ways to offer more subjects that fulfill the Institute’s CI requirement, which calls for students to produce a variety of communication-oriented assignments.

Jaffe, who co-founded and for many years co-taught Physics of Energy with Professor Washington Taylor of physics, says he agreed to restructure 8.21 as a CI because he thinks reading and writing about energy is an important skill. “Writing clear, convincing, even interesting prose is a skill any scientist or engineer needs. Critical writing for non-specialists and editing effectively play almost as important a role as writing up your own work,” he says. 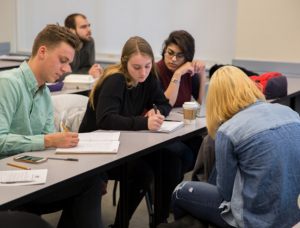 Physics of Energy is a survey course covering a broad swath of material, including mechanical energy, thermal energy, electromagnetic energy, and solar and nuclear energy. The writing assignments balance this breadth with depth by giving students an opportunity to research selected topics more thoroughly, Jaffe says.

“Writing papers offers students the chance to drill down in a couple areas they find interesting and study these more deeply,” he says. “We still have problem sets, but it’s a more rounded experience that involves honing your thoughts to a particular kind of audience.”

Writing in 8.21 is centered on exploring, evaluating, and explaining energy topics in a way that would provide useful guidance to a policymaker, Jaffe says. Students are required to produce two papers for the class, each focused on a scientific issue related to energy sources, systems, or uses.

For example, Jaffe says, a student might present the pros and cons of erecting a tidal barrage across the Bay of Fundy in Canada. “What are the dynamics? What’s the capacity? What are the problems associated with it? What does it do to the marine environment?” Jaffe says. Whatever the students decide to research—from the advantages of flywheel energy storage to the benefits of different wind turbine designs—they are expected to explain the underlying physics carefully. “You need a scientific structure in which to analyze assumptions,” Jaffe says.

Claire Halloran ’20, a materials science and engineering major who chose 8.21 to fulfill a requirement for the Energy Studies Minor, says choosing a research topic was an appealing feature of the class. “I think it’s nice in that it lets me explore a topic that’s interesting to me and to do so on my own terms.”

Shannon Hwang ’20, an electrical engineering and computer science major who also plans to complete the Energy Studies Minor, agrees. “I’m probably not going to work in a quantitative energy field, so it’s probably going to be more useful to me to write papers,” she says.

Transforming the class into a CI required a change in staffing, Jaffe says. While the class was previously taught by two physics faculty members and one teaching assistant (TA), this year 8.21 is being taught by Jaffe and a specialist from Writing, Rhetoric, and Professional Communication (WRAP), an MIT center focused on providing support for CI courses.

WRAP staffer Rodger LeGrand, a lecturer in Comparative Media Studies/ Writing, conducts one interactive session every week in which students read and analyze writing, discuss what works well in communicating technical topics, and practice. “That’s our lab,” says LeGrand, who also provides one-on-one coaching to help students plan, draft, revise, and polish their written work. “They’re making observations, and we’re talking a lot about those [observations] as writers and readers.” 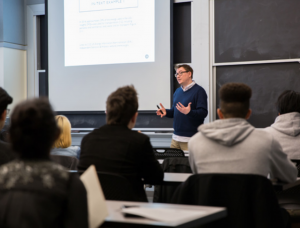 Rodger LeGrand, a lecturer in Writing, Rhetoric, and Professional Communication (WRAP) within Comparative Media Studies/Writing at MIT, leads a once-weekly interactive writing session for the students of Physics of Energy. Photo: Kelley Travers

In addition to Jaffe and LeGrand, 8.21 is also staffed by a TA from physics and a corps of eight subject matter consultants lined up to help students take deep dives into energy topics for the subject’s two writing assignments. “It’s nice to have so many advisors,” says Andrew Turner, a PhD student in physics who serves as TA for the class and leads a weekly recitation section focused on the physics content of the course. “Because the course covers such a broad range of topics, it’s impossible to find someone to cover all the material.”

Antje Danielson, education director for the MIT Energy Initiative (MITEI) and one of the advisors, says, “Undergraduates get more attention with this team of people. They have a much larger number of mentors and teachers available to them.”

In addition to Danielson, MITEI provided two additional advisors for the class: postdoctoral associate Emre Gençer—an expert in carbon capture, utilization, and storage technologies— and physics postdoc Patrick Brown, who has a background in solar technology. “Postdocs and PhD students also gain experience by mentoring undergraduates,” Danielson says. Danielson notes that Gençer and Brown’s role in the class is funded by a generous gift from donor William Wynott that supports the Energy Studies Minor.

In another first, students in 8.21 are getting the chance to use a brand-new textbook, The Physics of Energy (Cambridge University Press, 2018), which was written by Jaffe and Taylor. “It’s intended to serve not only as a resource for courses and a document to stimulate the creation of courses in energy science, but also as a desk reference for workers in the field,” Jaffe says.

Jaffe notes that teaching 8.21 as a CI is still an “experiment,” and he says he will be eyeing class evaluations to see how the students handle all the course material with the addition of writing assignments.

However, there are signs the remodeled subject is fitting a niche. “[The students] are coming in really excited about talking about energy for a general audience,” LeGrand says. “They’re engaged.”