For some years, the United States has had regulations in place to cut its growing consumption of gasoline in passenger cars. A new MIT analysis shows that those regulations—which mandate increasing fuel economy in new cars and, more recently, the gradual phasing in of biofuels—are not the most cost-effective way to reduce gasoline use. Indeed, a moderate tax on gasoline could elicit the same reduction at a sixth of the cost. But using a tax to reduce gasoline demand has never proven politically feasible in the United States.

Other results of the analysis show that combining policies may actually reduce cost-effectiveness. For instance, when regulations on vehicle efficiency and fuels are imposed at the same time, the costs are additive but the benefits are not. And combining those passenger vehicle and fuel regulations with a cap-and-trade system would only increase the costs of cutting greenhouse gas (GHG) emissions.

Those findings come from a macroeconomic model with a novel transportation component: it includes detailed information on advanced vehicles and fuels, vehicle ownership and fleet characteristics in different countries or regions, and consumer investment in vehicle and fuel prices.

The model’s ability to track responses to specific policies at a detailed level yields useful insights for policymakers. Results thus far suggest that, in the case of passenger vehicles, the most politically feasible policies in the United States today also rank among the most costly—and that the challenge for policymakers is to find ways to address this trade-off over time.

Effects of US driving habits

Passenger vehicles generate about 16% of total anthropogenic GHG emissions and consume about 40% of the total petroleum used in the United States—statistics that are troubling for both climate change and energy security reasons. Policy and regulatory measures create constraints and incentives that can influence consumer behavior, but it can be difficult to assess in advance of how effective and costly such actions will be in reducing gasoline use and GHG emissions.

Analysts can use macroeconomic models to predict, for example, how increases in gasoline prices will affect fuel use, incomes, and prices of other goods in energy and non-energy sectors as well as how changes in different sectors may interact. And they can use models with detailed descriptions of vehicles technologies and fuels to forecast, say, the energy-efficiency characteristics of plug-in hybrids or the composition of the vehicle stock over time. But assessing the costs and benefits of policies aimed at reducing gasoline use and emissions in passenger cars is best achieved with a model that combines both economics and technology.

“Models used in policy analysis typically do not capture both extensive passenger vehicle system detail and economic feedbacks in an integrated fashion,” says Valerie Karplus PhD ’11, a research scientist in the MIT Joint Program on the Science and Policy of Global Change. “Most models don’t do well at representing how technology and behavior respond to economic signals—but getting that right is critical to understanding the impacts of specific policies.”

To fill that gap, Karplus decided to implement a more detailed transportation component within MIT’s Emissions Prediction and Policy Analysis (EPPA) model. This sophisticated macroeconomic model—developed, refined and applied over the past 20 years by researchers in the Joint Program—tracks global economic activity and associated energy use and GHG emissions. The enhanced transportation component was drawn from work performed in the MIT Future Vehicles and Fuels Program, led by John B. Heywood, professor of mechanical engineering.

Karplus used empirical data to represent technology and fuel options and the behavior of vehicle consumers and drivers. To ensure that the model reflected the latest industry predictions on advanced vehicles and fuels options, she consulted several experts, including Rosemary Albinson, technology and transport strategy advisor in the Research and Technology Group at BP. Based on her wide-ranging experience, Albinson could provide detailed data on advanced vehicle and fuel technologies along with valuable insights into the workings of global markets for ground transportation. “I could explain the differences between how people think about fuel costs in the freight business versus the passenger-car business, and between the developing world and the developed world—and there are distinctive characteristics that need to be modeled differently,” says Albinson.

Aided by information from Albinson and others, Karplus made three major changes to the transportation sector of the EPPA model.

Unraveling the impacts of specific policies

Karplus’ first task was to establish a baseline. Using the refined EPPA model, she analyzed gasoline use and GHG emissions out to 2050 without any policy or regulatory intervention. Her results show that in the United States between 2010 and 2050, gasoline consumption and GHG emissions would not change much from today’s levels, assuming plausible variations in travel demand, costs of efficiency improvements, and availability of alternative-fuel vehicle types.

Karplus then looks at two representative policies for reducing gasoline use. The fuel economy standard (FES) policy regulates the sales-weighted average fuel economy of new vehicles (designed to be similar to the Corporate Average Fuel Economy, or CAFE, standards, which were enacted in 1978 and have been recently tightened). The renewable fuel standard (RFS) mandates that a portion of the fuel supply be composed of an alternative fuel, in this case advanced biofuels (similar to the RFS included in the US Energy Independence and Security Act of 2007, which gradually phases in biofuels over 15 years).

For comparison, she defined FES and RFS regulations that would achieve a 20% cumulative reduction in gasoline consumption between 2010 and 2050. She also designed a gasoline tax policy that would elicit the same cumulative reduction. (The tax was implemented as a constant percentage of the gasoline price, starting at $1.00 per gallon in 2010.) Consistent with other studies, her analysis of those three measures indicates that taxing gasoline is 6 to 14 times less costly that then alternative policies in achieving a 20% reduction in the use of that fuel between 2010 and 2050.

Understanding how the policies work helps clarify why their costs differ. The FES regulation affects only new vehicles, so its beneficial effect requires that those vehicles be bought and driven in significant number. The FES regulation is the most costly when fuel economy increases are phased in gradually. The timing of the required standards is critical. If the fuel economy standards ramp down gradually in the early years, achieving the cumulative 20% reduction requires introducing high levels of vehicle efficiency in the final compliance years—an increasingly expensive proposition. 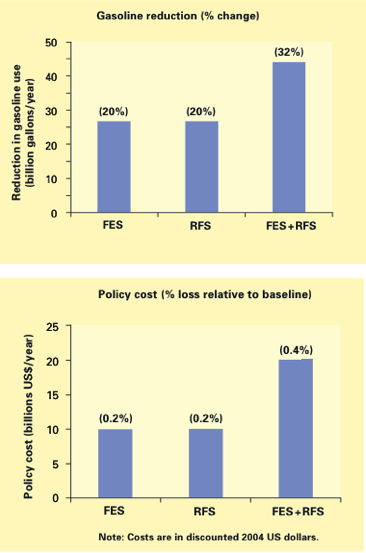 These charts present the calculated impacts and costs of imposing a fuel economy standard (FES) and a renewable fuel standard (RFS) at the same time. Each standard is designed to reduce cumulative gasoline use by 20% between 2010 and 2050. (In this analysis, FES and RFS costs are roughly equal due to details of the assumed policies, notably the early timing of required changes.) As the charts show, the combined standards yield a 32% reduction in gasoline use—significantly less than the expected 40%. Yet the total cost roughly equals the costs of the two standards added together. These results demonstrate the need for integrated assessments of multiple policies to obtain an accurate forecast of their combined effects.

Costs are lower with the RFS regulation. It immediately begins to displace some gasoline with biofuels in both new and used vehicles. In addition, biofuels cost more than gasoline, so consumers have an incentive to drive less, thereby cutting their use of all fuels.

Finally, the gasoline tax incurs the least cost because it elicits responses on several fronts. It provides a strong incentive for consumers to buy fuel-efficient vehicles, adopt biofuels if they are cost-effective, and sharply curtail travel in both new and used vehicles.

Karplus also showed that combining the FES and RFS regulations led to roughly additive costs but less that additive benefits (see the figure on page 13). This result stresses the importance of performing integrated assessments of multiple policies that are enacted simultaneously. “When government agencies examine the cost-effectiveness of a proposed policy, they need to consider the action of other, complementary policies that might actually reduce cost-effectiveness,” says Karplus.

The other troubling feature of US passenger vehicles—their high contribution to GHG emissions—is not addressed by the three policies analyzed thus far. In Karplus’ results, the policies all produce comparable, relatively modest reductions in US GHG emissions (5% or less of total cumulative carbon dioxide emissions from fossil fuel use). She therefore added a measure that specifically targets GHG emissions, namely, an economy-wide cap-and-trade (CAT) policy, which has previously been considered in US legislative proposals to address climate change. She analyzed the impacts of a CAT policy alone and in combination with an FES regulation.

The analysis shows that the overall cost of the CAT and FES policies combined would be higher that the cost of the CAT policy alone—with no added reduction in GHG emissions. The CAT policy is designed to elicit the least expensive GHG-reducing measures first. (If a firm needs to cut its emissions but its only options for doing so are expensive, it will buy less-expensive reductions form another firm.) An FES forces automakers to manufacture and sell more fuel-efficient cars—a set that is significantly more expensive that other available misconstrued options. The result: a higher cost to achieve the same emissions reduction.

Karplus also investigated why, in the United States, choosing the most cost-effective energy and climate policy for passenger vehicles has proven so difficult. She identifies trade-offs between the features of policies that make them cost effective and those that make them politically feasible. For example, combining energy and climate goals may mean policies appeal to broader constituencies, but combining policies that achieve these goals separately may unintentionally reduce cost-effectiveness. She argues that these trade-offs are likely to mean that the most cost-effective policies will be out of reach in the near term. So, how do we move forward?

“We need to find ways to get past the age-old debate, starting with what is possible today but with an eye to what might be possible tomorrow as today’s policies change underlying incentives. Right now, economists push for the most cost-effective measures, and the policy community responds that such measures are politically impossible,” says Karplus. “Plicies that are politically feasible now can be designed to maximize their cost-effectiveness, and every policy should include clear timelines for revisiting its impacts and for assessing the feasibility of moving to more cost-effective policies over time. That will help us achieve our critical energy security and climate goals.”

This research was funded by BP through the BP-MIT Advanced Conversion Research Program. BP is a Founding Member of the MIT Energy Initiative. Additional support came from the Martin Family Society of Fellows for Sustainability and a Science to Achieve Results (STAR) Graduate Fellowship from the US Environmental Protection Agency. Support was also provided by Professor John B. Heywood‘s Future Vehicles and Fuels Program sponsors. Further information can be found in the following publications (available at globalchange.mit.edu/pubs):

V. Karplus, S. Paltsev, M. Babiker, and J. Reilly. Should a Vehicle Fuel Economy Standard Be Combined with an Economy-Wide Greenhouse Gas Emissions Constraint? Implications for Energy and Climate Policy in the United States. MIT Joint Program on the Science and Policy of Global Change, November 2011.

This article appears in the Autumn 2011 issue of Energy Futures.