MIT undergraduates are “converting” to energy

At MIT, Cecilio Aponte ’15 discovered “the perfect ecosystem for an engulfing energy obsession.” Priyanka Chatterjee ’15 came for ocean engineering, then “fell in love with the energy program.” Diego Giraldez ’15 realized he could simultaneously explore “crazy, ‘what if’ questions and cutting-edge energy technologies.”

MIT undergraduates are “converting” to energy. As they encounter a wealth of energy-oriented classes, research possibilities, and extracurricular activities, plus a community dedicated to addressing the energy challenge, students are adopting energy as a central and sometimes dominant theme in their education.

Aponte, a materials science and engineering major, says he has taken to heart a line by his favorite rap artist, Watsky: “I’m looking, I’m looking, I’m looking for energy everywhere.” These words might serve as a catch-phrase for an increasing number of his peers, as the cohort of energy-intent undergraduates swiftly and steadily expands, say MIT administrators.

Take, for example, the Energy Studies Minor. The MIT Energy Initiative (MITEI) launched this specialized course of studies in 2009, and three energy minor students graduated in spring 2010. The curriculum consisted of a handful of courses in the foundational areas of energy science, social science, and energy technology/engineering, and 24 electives. Five years later, the foundational course offerings, especially in social science, have swelled, along with electives, and the Energy Studies Minor is celebrating its largest class ever—35 students. “That’s a lovely growth trajectory,” says Amanda Graham, director of the MITEI Education Office. It is now the third largest minor at MIT, after economics and management/management science.

Undergraduate research opportunities (UROPs) in energy supported through MITEI have also shown steady growth, rising from eight in 2008 to 47 in 2014. “What impresses me is the diversity of disciplines represented in [all of MIT’s energy-related UROP] research,” says Michael Bergren, associate dean of academic and research initiatives. “We’re seeing projects not just in engineering fields, but in the sciences and social sciences such as architecture, economics, and policy. These UROPs raise visibility across the entire MIT community about the significance of energy research, and undergraduates see they can make an impact on real energy problems.” 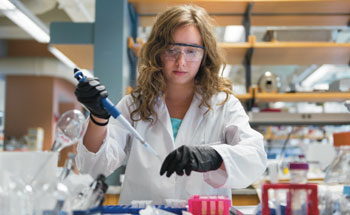 For her summer 2014 UROP project, Alexandria Miskho ’17 of chemical engineering examined various approaches to converting food and yard waste into biofuels. Using high-performance liquid chromatography, she analyzed different types of waste samples to measure concentrations of fatty acids, which can be used in yeast-based biofuel production. Here, she prepares a sample for analysis. Photo: Justin Knight

A shared pursuit and purpose

The idea of making an impact resonates with many undergraduates, as does joining a community with a shared purpose. By pursuing energy, they can do both at the same time—an insight some students come to early on.

For instance, during her FPOP experience, Chatterjee, an ocean and mechanical engineering major, constructed solar cell modules using raspberry juice as a chemical agent and learned about the potential of solar power to revolutionize the energy industry. She also interacted with faculty and students from a diverse range of disciplines. “I saw that there was a big community involved…and I was blown away by how much you can do in the field,” she says.

FPOP was also an academic “driver” for Chatterjee, as she recognized that studying energy would enable her “to make an even bigger impact” than sticking exclusively to ocean engineering. As a result, she wasted no time signing up for the Energy Studies Minor.

Giraldez decided soon after his FPOP experience to pursue the minor because it offered the perfect complement to his chemical engineering major. He had arrived at MIT with many “open questions” about energy systems, he says, and while chemical engineering gave him a good basis for understanding these systems, “the minor shows you how they really fit into society— why for instance you can’t just build a ton of nuclear power plants.”

Aponte says that the minor “grounded my interest in energy and gave me the tools I needed to learn, while still offering the space I wanted to float around and try new things.” Among those new experiences were designing and building a biodigester-latrine system for rural El Salvador in D-Lab: Energy (EC.711) and conceptualizing a plan for decentralized solar charging infrastructure in Boston (3.004 Principles of Engineering Practice).

Central to his energy education, Aponte says, was the “community of people to discuss challenges with and learn from.” With “like-minded friends” he attended lectures and events, and in such clubs as e4Dev—Energy for Human Development—he found “graduate student heroes” who “have definitely shaped visions of my future.”

For Johnathan Kongoletos ’14, a mechanical engineering major, energy studies led to community involvement of a different kind: He spent part of the summer of 2014 pedaling a battery-powered, adult-sized tricycle during an MIT-to-Albany trip with the MIT Electric Vehicle Team.

When Kongoletos was not struggling over bumpy country lanes, he was conducting research for MIT’s Building Technology Program, helping determine energy efficiency and conservation measures for MIT’s next big infrastructure investment, the MIT.nano laboratory building.

This was one in a string of research projects focused on energy efficiency measures for MIT campus buildings. In an earlier UROP, Kongoletos helped assess new high-performing glass being contemplated for renovations in 1917-era Killian Court buildings. “This was research whose impacts I could see,” he says.

The defining experience of energy research

Whether on or off campus, undergraduates seek ways to make vital contributions to energy research. Says Chatterjee, “People at MIT really care about making a difference and in a way that connects with their interests.”

Chatterjee managed to combine her love of oceans and energy through two MITEI-sponsored UROPs: one on designs for a tidal power generator, which she modeled in a giant water tank in the basement of an MIT building; and another involving the use of laser technology to look for leaks in natural gas pipelines on the ocean floor.

In an engineering laboratory class, Giraldez helped design a toilet for the US Army that uses much less water. Developing a hydrophobic coating for low-flush toilets would reduce not just the amount of water the Army ships to remote locations around the world, but energy as well.

Hands-on, practical research like this, along with other energy studies classes, Giraldez says, “solidified my desire to enter the energy industry, and made me look at the world in a much different way.” An internship as a process engineer at a Chevron refinery in California this past summer sealed the deal for Giraldez, who now hopes to work in the oil and gas industry.

For some undergraduates, energy education is a springboard to a career. For others, it’s an essential platform for contemplating a path forward. “I have been exposed to so much more than I could have ever expected,” Aponte says. “When I came to MIT, I had no idea what I wanted to do, and now thanks to the community here, I am at least sure it has to do with energy.”

With another year to go, Chatterjee has a lot on her plate, including developing an entry for the MIT Clean Energy Prize competition, a project on offshore solar technology. But after three years at MIT, she says, “I see myself, and feel represented, through my interests in energy.” While still tailoring these interests, Chatterjee believes that becoming a “social entrepreneur in the environment and energy space would be a dream come true.”

Pursuing this dream does not seem far-fetched on a campus full of accomplished strivers supported by top-tier researchers. With the rapid expansion of formal and informal opportunities for energy education and research, and a swelling legion of energy-focused students and faculty, “energy has become engrained in undergraduate culture and intertwined with every discipline,” says Chatterjee. “We’re becoming a vibrant community inspired by what we can do with energy.” 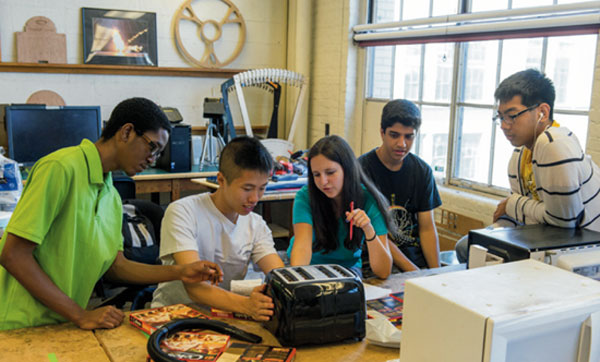 During MITEI’s 2014 freshman pre-orientation program, students use a Kill-A-Watt power meter to measure the power consumption of various household appliances. Activities included calculating the amount of coal, hydro, uranium, solar, and battery power that would be required to cook their lunchtime pizza. The overall goal: to help the participants develop practical intuition about energy and power. Photo: Justin Knight