An MIT researcher and his colleagues have developed a system that can make liquid fuels from an abundant, familiar, and troublesome source: trash.

The system can convert municipal and nonhazardous industrial waste into valuable products including ethanol, methanol, and synthetic diesel at an affordable cost, in part because the starting materials come at a negative cost: people pay to have them taken away.

“In the ideal case, if we processed all U.S. municipal and industrial waste this way, we could produce up to 50 billion gallons of alcohol fuel, which is equivalent in energy to around a fifth of the gasoline used in this country,” says Daniel R. Cohn, senior research scientist at the MIT Plasma Science and Fusion Center and the MIT Energy Initiative. “At the same time, we’d reduce the amount of material in landfills, which are now a major source of methane, a very potent greenhouse gas.”

The work is a striking demonstration of how basic research on a long-term technology—nuclear fusion—can lead to commercial products with significant near-term impacts, in this case, protecting the environment and reducing U.S. dependence on foreign oil.

Thinking outside the box

In the late 1980s, Cohn and his collaborators were working to understand the behavior of plasmas, ionized gases that play a key role in fusion energy devices. The goal of fusion research is to harness the same energy—nuclear fusion—that powers the sun to serve as a sustainable power source on Earth, and a key challenge is finding a way to contain the hot, dense plasma long enough for fusion reactions to occur.

Plasmas also form at lower temperatures, for example, when lightning cuts through the air, breaking apart molecules in its path into a mixture of free electrons and positive ions. Sometimes called the fourth state of matter, plasmas have characteristics that are not seen in ordinary gases, and they have become a valuable tool in materials processing.

Recognizing that practical fusion energy was still well in the future, the research team began to think about nearer-term applications for plasma technology. “We decided that the environmental area was in need of new approaches and that plasma technology could make a real difference,” says Cohn. “In particular, it seemed well suited to waste disposal because it can simply disintegrate or vaporize even the nastiest of materials.”

Their first target for destruction was “mixed waste,” a combination of chemical and nuclear waste that the U.S. Department of Energy (DOE) must dispose of. Taking advantage of the huge space and high power supply available at the MIT Plasma Science and Fusion Center, Cohn and his collaborators—including a group from the Battelle Pacific Northwest National Laboratory (PNNL) led by Jeffrey Surma—designed and built a largescale plasma furnace in that MIT facility. They then demonstrated its ability to deal with simulated waste, specifically, hazardous chemicals mixed with dirt and metals (which stood in for the radioactive component in nuclear waste). Later PNNL tests in an actual radioactive environment were successful. Those tests were carried out at the PNNL facility in Richland, Washington, near the DOE Hanford site.

Cohn and his colleagues next thought about using plasma technology for a wider range of waste materials and finding ways to make it more effective. They came up with the idea of adding a second stage to the plasma furnace. This second stage—a “joule-heated melter”—is a technology that had been developed at PNNL and used by DOE to isolate the most hazardous radioactive components of nuclear waste. Key to the melter is a molten glass bath, kept hot by a current passing between two submerged electrodes. Inorganic material from the hazardous waste is incorporated into the glass bath. When the glass is removed and cooled, it traps the waste within its solid matrix.

In 1995, Cohn, Surma, and two other partners founded a company called InEnTec to commercialize the two-stage device, the Plasma-Enhanced Melter, or PEM. Small demonstration and commercial units were installed in the United States, Japan, and Taiwan. These units achieved a high degree of waste destruction, converting the waste into a valuable hydrogen-rich gas while surpassing environmental regulatory requirements.

In fall 2008, InEnTec and Dow Corning Corporation announced an agreement under which a larger PEM unit would be built at the Dow Corning facility in Midland, Michigan. The unit would process chemical hazardous waste and produce valuable products that could be reused within the plant. “None of this chemical waste needs to be shipped out of the plant,” says Cohn. “The concept is a sustainable process whereby the chemical industry uses the waste it produces.”

The Dow Corning unit is now being constructed and will be operated by InEnTec Chemical, a joint venture between InEnTec and Lakeside Energy LLC. It is the first in a series of units that InEnTec plans to build for the chemical industry using a project financing fund of up to $150 million provided by Lakeside Energy.

Converting trash to liquid fuels for cars and trucks

About two years ago, InEnTec began to set its sights on municipal waste, a feedstock with several advantages. It is available in huge quantities just about everywhere; people pay to have it taken away; and—best of all—it is rich in biomaterials, so it should be ideal for producing fuels, in particular, liquid fuels needed for transportation.

Cohn notes that turning garbage into energy is not a new idea. “But present technology involves incineration, which burns the waste, generates hard-tohandle toxic pollutants such as dioxin, produces potentially hazardous ash—and in the end generates heat, which is then used to raise steam to run a power-generating turbine,” he says. “Our system uses plasma-enhanced gasification, which converts the waste directly into clean fuel and essentially eliminates the production of dioxin and ash.” Added environmental benefits come from diverting material from landfills, which can contaminate soil and groundwater and—as materials decompose—generate huge amounts of methane, a greenhouse gas that is 20 times more potent than carbon dioxide.

To optimize their system for destroying municipal waste, engineers at InEnTec added one more stage to their setup: a conventional gasifier that acts as a preprocessor. This simple, inexpensive technology handles the abundant easy-to-treat part of the waste, leaving just the difficult-to-treat parts to move on to the next stages. 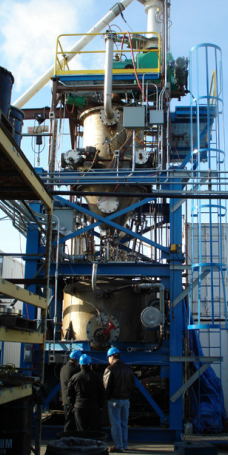 InEnTec’s demonstration unit for converting up to 25 tons per day of municipal waste into syngas. The unit is located in Richland, Washington. Shredded waste is transported to the top through the diagonal white pipe at the upper left and is then processed in the various stages of the unit. Photo: InEnTec

The figure above shows the threestage system. Trash is shredded into pieces about six inches long and dumped into the gasifier at the top. There, the material is heated and mixed with just enough oxygen to cause chemical reactions but not enough to burn the waste as in an incinerator. Much of the organic content (waste made of hydrogen and carbon) reacts to produce a combination of hydrogen and carbon monoxide called synthesis gas, or syngas. The syngas is sent to a catalytic system that converts it to ethanol and methanol or other liquid fuels or chemicals.

The inorganic material and remaining organics—now in the form of char— enter the second stage, the plasma furnace, where they are subjected to the electric arc that turns them into high-temperature plasmas. The remaining organics are converted to syngas, which is sent to the catalysts.

The inorganic waste drops into the molten glass bath in the joule-heated melter. When the glass is removed and cooled, it traps the inorganics, forming a material that can be safely landfilled (without decomposing or leaching) or used as construction material or sandblasting grit. Metals in the molten mix that are not incorporated into the glass separate from the bath and drop to the bottom, where they are removed and—depending on their composition—are recycled or safely discarded.

InEnTec has built a demonstration unit—one-fifth commercial scale—of the waste conversion system that uses municipal waste diverted from a landfill in Richland, Washington (see the photo at the left). The unit has processed 12 tons per day of Richland’s municipal waste, with a goal of 25 tons per day.

Cohn believes that their “plasma-melter gasification system” could provide the first significant non-corn-based renewable fuel replacement for liquid fuels. “Because it uses known technologies, it’s likely to come ahead of cellulosic ethanol, which requires more biochemistry research to develop an economically viable process,” he says. And the price is right. Given the negative cost of the feedstock, the system should produce alcohol fuels for less than $1.00 per gallon, which translates into the energy equivalent of less than $2.00 per gallon of gasoline.

Finally, the quantities involved are substantial, potentially replacing up to 20% of all the gasoline used in the United States. “That’s a lot of fuel that doesn’t come from food or from oil—and it’s a lot of money that doesn’t go overseas,” says Cohn. “It looks like the MIT fusion program has spun off one of the most promising near-term technologies for replacing gasoline and reducing greenhouse gas emissions at the same time.”

This article appears in the Spring 2009 issue of Energy Futures.