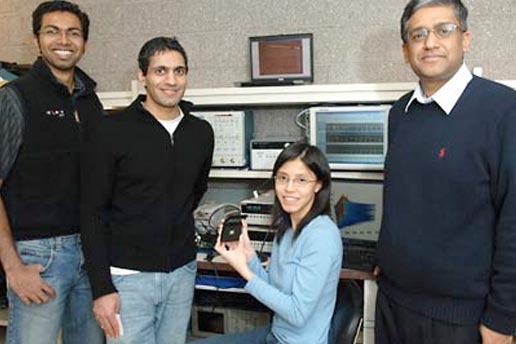 From left, electrical engineering graduate students Yogesh Ramadass, Naveen Verma and Joyce Kwong, along with Professor Anantha Chandrakasan. This team has developed a microchip that can be up to 10 times more energy-efficient than present technology. Photo / Donna Coveney

Researchers at MIT and Texas Instruments have designed a new chip for portable electronics that could be up to 10 times more energy-efficient than present technology. Given its reduced power consumption, the new chip could lead to cell phones, handheld computers, and remote sensors that last far longer when running from a battery.

Indeed, the power required could be so low that implantable medical devices such as pacemakers and health monitors could be powered indefinitely by a person’s body heat or motion—no battery needed.

According to Anantha Chandrakasan, the Joseph F. and Nancy P. Keithley Professor of Electrical Engineering, the key to the improvement in energy efficiency was finding ways to make the circuits on the chip work at a voltage level much lower than usual. While most current chips operate at around 1.0 volt, the new design works at just 0.3 volts.

Reducing the operating voltage, however, is not as simple as it might sound, because existing microchips have been optimized for many years to operate at the higher standard-voltage level. “Memory and logic circuits have to be redesigned to operate at very low power supply voltages,” says Chandrakasan, who directs the MIT Microsystems Technology Laboratories, where the work was conducted.

In order to extract the maximum amount of energy, whether from a battery or from ambient energy sources, the team also optimized the energy processing circuitry. The energy processor must not only provide the desired voltage to the electronic circuitry but also account for the characteristics of the energy source, variations in circuit demands, and environmental conditions. This ability to optimize the overall system energy and minimize losses helps to dramatically reduce the energy requirements of a wide range of portable electronic devices.

One key to the new chip design, Chandrakasan says, was to build a high-efficiency DC-to-DC converter—which reduces the voltage to the lower level—right on the same chip, reducing the number of separate components. The redesigned memory and logic, along with the DC-to-DC converter, are all integrated to realize a complete system-on-a-chip solution.

One of the biggest problems the team had to overcome was the variability that occurs in typical chip manufacturing. At lower voltage levels, variations and imperfections in the silicon chip become more problematic. “Designing the chip to minimize its vulnerability to such variations is a big part of our strategy,” Chandrakasan says.

So far the new chip is a proof of concept. Commercial applications could become available “in five years, maybe even sooner, in a number of exciting areas,” Chandrakasan says. For example, portable and implantable medical devices, portable communications devices, and networking devices could be based on such chips and thus have greatly increased operating times. There may also be a variety of military applications in the production of tiny, self-contained sensor networks that could be dispersed in a battlefield.

In some applications, such as implantable medical devices, the goal is to make the power requirements so low that they could be powered by “ambient energy,” Chandrakasan says—using the body’s own heat or movement to provide all the needed power. In addition, the technology could be suitable for body area networks or wirelessly enabled body sensor networks.

This research was funded in part by a grant from the U.S. Defense Advanced Research Projects Agency.