In 2011, the MIT Energy Initiative provided support to 29 undergraduate research projects (PDF), ranging from the physics of carbon dioxide migration and trapping to energy-harvesting textiles to maximizing the reversibility of lithium batteries. Several UROP projects are featured below. Photography by Justin Knight. 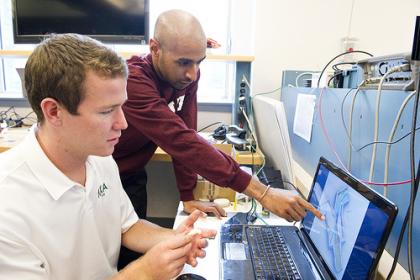 The chief purpose of this research project is to develop a propulsion system that allows for precise control of a robot in the narrow pipes of nuclear cooling systems. Our current research is focused on developing a robot that uses a pump and multiple jets to maneuver because propellers are unsuitable for the tight conditions. The problem with this jet and valve driven system is that commercially available valves are too bulky and inefficient with low flow coefficients, all of which cause the robot to be too large for the confined space. The project focuses on using Coanda Effect Valves which are much lighter and more efficient with higher flow coefficients. If these valves can be perfected, they will substantially increase the feasibility of a machine that can successfully and efficiently maneuver and inspect damages inside nuclear cooling pipes. 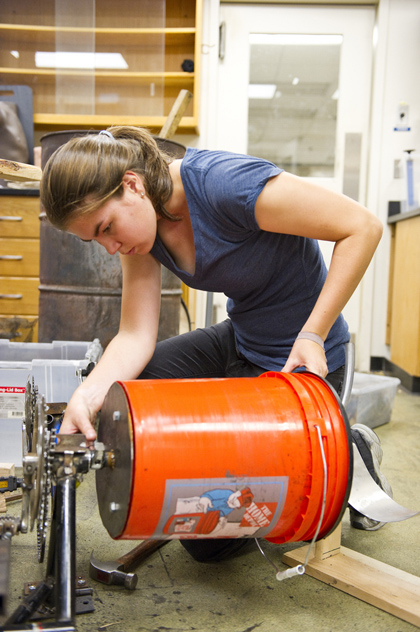 In the developing world, the biomass often used for cooking and heating can cause respiratory health problems. Agricultural waste charcoal has been developed as an alternative fuel. Burning carbonized agricultural waste can reduce respiratory illness as a result of air pollution and limit deforestation. This project will test emissions from this charcoal to ensure that EPA standards are not exceeded, and demonstrate the health advantages associated with using the charcoal. The main goal of the project is to develop new machinery that can carbonize and briquette agricultural waste at the same rate the waste is available (about 1 ton per day). This will enable farmers to sell to a larger market, making the charcoal more accessible to entire communities, while also decreasing the rate of deforestation. 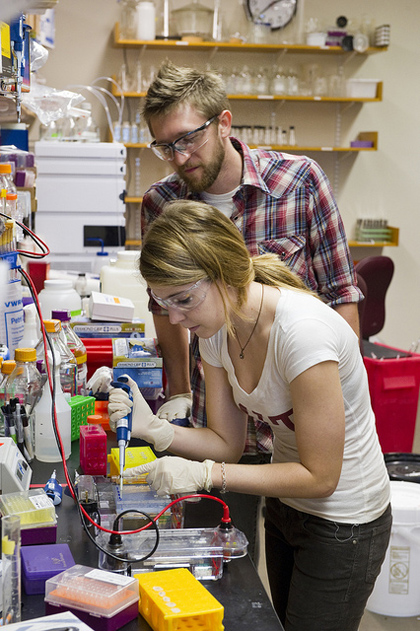 This research project involves the production of 6‐ and 7‐carbon branched alcohols to be used as a replacement for fossil fuels, especially gasoline in the transportation industry. The fuels being produced will be fermented from biomass and therefore will not have the high greenhouse gas emissions characteristic of fossil fuels. However, these longer saturated alcohols have a higher energy density and properties closer to gasoline than currently produced and shorter saturated alcohols such as ethanol. These alcohols will be produced through the development of a pathway in microbial hosts, specifically E. coli. A fatty acid synthase (FAS) system is the proposed pathway for the extension of the carbon chains. Quantitative polymerase chain reaction will be used to determine whether the desired pathways have been copied into the plasmid and the stability of the modified plasmid as well as to gather other relevant data. 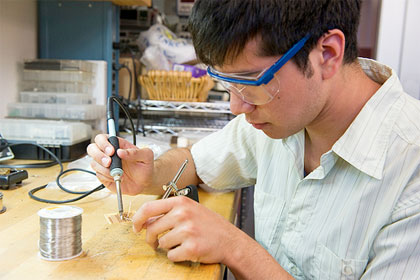 This project focuses on using robotics to increase the safety of nuclear power plants. Specifically the Robotics Research Laboratory in the Mechanical Engineering department is designing a compact submersible robot to be used for inspection tasks that could expose humans to dangerous levels of radiation. To control this Inspector robot, we plan to submerge a second Translator robot as a relay point. This Translator bot will detect optical commands (lights, which travel long distances in water), translate them into radio signals (capable of reaching around corners or when line‐of‐sight is lost) and send them to the Inspector. This method of communication will also work in the reverse direction. My initial duties within the project are creating and optimizing the reception and transmission of optical and radio signals for the translator robot using an imbedded micro‐controller. I will also be developing the control system for the main Inspector robot.