After unveiling 11 new buildings in as many years, MIT is turning its attention to renovating existing campus buildings—work that promises both to make the Institute more energy-efficient and to influence design standards in the construction industry, according to the Department of Facilities.

“The major stock of buildings is existing buildings, so that’s where the biggest opportunities lie for reducing energy use,” says Peter Cooper, manager of sustainable engineering and utility planning for Facilities and a member of the MIT Energy Initiative’s Campus Energy Task Force (CETF).

MIT plans to spend $250 million over the next three years on an accelerated Capital Renewal Program. The goal is to do a major building renovation or two each year.

“The Institute is embarking on a program of accelerated capital renewal so that we can begin to address the overall deferred maintenance backlog across campus,” says Executive Vice President and Treasurer Israel Ruiz, who co-chairs the CETF. “Sustainability is a key theme in our planning efforts. We constantly strive to incorporate sustainable approaches wherever possible as we make decisions about construction and renewal projects.”

MIT is interested in finding ways to improve the efficiency of existing structures not only for its own benefit but also because, as Cooper says, “At MIT there is an expectation that we ought to be smarter about how we do things…and [contribute] to the body of knowledge.”

Therefore, while MIT is renewing and retrofitting campus buildings, it is also collecting data that will be submitted to the American Society of Heating, Refrigerating, and Air Conditioning Engineers (ASHRAE), which sets standards for energy-efficient building design, according to Walter Henry, who was director of Facilities’ Systems Engineering Group prior to his retirement in July. “Some of the handbook data now are 20 years old or so; they don’t recognize how much better buildings can perform,” he says.

MIT’s findings could make an enormous impact not only on campus but also nationwide. The building sector is the largest consumer of energy in the country, accounting for about 41% of total energy use, according to the US Department of Energy. Moreover, at least half of today’s buildings will still be standing by mid-century, notes the Pew Center on Global Climate Change. As a result, retrofitting structures and upgrading the efficiency and operation of their heating, ventilation, and air-conditioning (HVAC) systems offer an important near-term opportunity to significantly reduce greenhouse gas emissions.

Officially, MIT’s Capital Renewal Program launched at the start of Fiscal Year 2013, July 1, but the Institute has long been hard at work learning how to make buildings more useful, comfortable, and energy efficient. Just this summer, Facilities tested the results of cutting-edge design work both in the new Sloan School of Management building (E62) and in the newly renovated Arthur D. Little Building (E60) next door—with good results.

MIT’s work on E60, a masonry building constructed in 1917, is particularly significant because it challenges the industry assumption that masonry buildings cannot be insulated without risk of damage from moisture, which leaks through brick and can become trapped in walls. If the moisture freezes there, it can deteriorate the wall unexpectedly.

Currently, designers err on the side of caution and don’t insulate masonry buildings at all, making them much less energy-efficient than new construction. “The design community needs to know how much [insulating] you can do,” Cooper says. “Now they just steer a wide path around the whole issue.”

So MIT teamed up with Building Science Corporation, an outside consulting firm with Institute ties, to explore whether insulating E60 might be possible. Building Science has done some groundbreaking research in this area that determined that risk depends on the type of brick and how much moisture it’s going to absorb, Henry says. “We had the brick [in E60] tested and determined the risk was low.”

Therefore, when MIT renovated E60 in 2011, workers insulated the building with 2 to 2.5 inches of spray foam. Then they added instrumentation to test the effects. Devices are now recording rainfall, insolation (the energy from the sun that hits the building), surface temperatures, wind direction, humidity, and interior humidity and temperature, providing a profile of what the walls are experiencing, according to Joseph Gifun, current director of the Systems Engineering Group.

There are not enough data yet to draw conclusions—especially since last winter was so mild—but the nine months of data accumulated so far have not shown any conditions where the brick was at risk.

In addition, a standard “blower-door test” conducted this summer indicates that the new insulation has significantly improved the building’s performance. This test involves closing all external windows and doors, sealing HVAC louvers, opening interior doors, and using fans to create a pressure difference between the interior and exterior, enabling the testers to measure the leakage of air through the exterior envelope.

Results showed the rate of air infiltration into and out of the building measured just 0.18 cubic feet per minute (cfm) at a pressure of 75 Pascal—equal to the wind pressure from a moderate breeze. That performance is better than the standard of 0.40 cfm75 set by the US General Services Administration (GSA) and the higher standard set by the US Army Corps of Engineers (0.25 cfm75).

“This is principally due to the use of spray foam insulation and partly due to the new windows,” Henry says. “The GSA standard is not considered very aggressive but the Corps standard is, and 30% of the buildings designed to it do not pass. Clearly we have done well.”

MIT didn’t test E60’s performance before the renovation, but Facilities did conduct a blower-door test this summer on E52, a similar masonry building currently in line for renovations. Its high rate of infiltration—0.46 cfm75—indicates how much improvement can be made. “The difference between the E52 and the E60 results demonstrates what can be done with careful detailing and by using spray foam insulation or other effective air barriers,” Henry says.

These results will be considered in deciding whether to insulate E52 and will help provide industry with the information needed to make better decisions about renovating masonry buildings in the years ahead. “I’m convinced we’re going to change the conventional thinking on this and we’re going to do that by the numbers—so people don’t just use the rule of thumb and say no, we can’t do this,” Henry says.

Testing conducted this summer at Sloan (E62) is also designed to change the numbers—in this case, those used by industry to determine the level of HVAC needed for new buildings.

“There were many years when energy was cheap….You didn’t need to have a fine-tuned building design; you could just put in a bigger heating and cooling system,” Cooper says. In recent years, however, demand for energy-efficient buildings has risen dramatically while industry standards continue to lag.

Since MIT has become increasingly sophisticated about designing for sustainability—and Sloan is a premier example—Facilities used a blower-door test to gather hard data on the building’s performance for ASHRAE, which will use the information to develop more accurate industry guidelines. 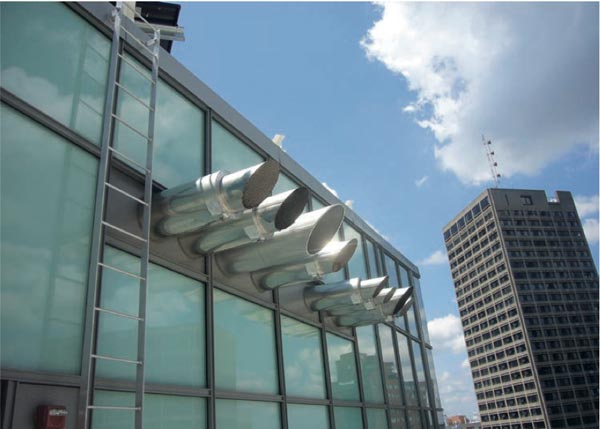 Performing the blower door test on the new Sloan building required first sealing up all external openings, including the kitchen fans shown here.

E62 includes several features designed to improve its energy performance, including insulation to prevent the leakage of air through the walls of the building and sunshades and screens to reduce solar heat gain. “We think the high quality of the exterior envelope has a lot to do with how the building is performing,” Henry says.

These features enabled MIT to downsize the building’s HVAC system and helped earn E62 a Gold certification from the US Green Building Council’s Leadership in Energy and Environmental Design (LEED) program in 2011. This summer’s testing provides hard performance data that MIT’s design decisions are paying off.

“The blower test at Sloan was incredibly successful,” says Gifun. E62 measured 0.14 cfm75. “This is a way of finding holes in the system, and it didn’t leak.”

The benefits of these results will accrue to future projects, as MIT’s experience with Sloan (and the similarly well-performing new building housing the Koch Institute) is providing evidence that it is possible to downsize HVAC for a fairly airtight building below current industry recommendations.

“Sloan and Koch are good examples. We made the investment in high-performing envelopes, and our design process facilitated downsizing the HVAC systems for offsetting capital cost savings,” Cooper says. “And we enjoy the energy benefits forever.”