Designing buildings for top energy performance gets a lot of attention— from articles hailing new green technologies to awards for Leadership in Energy and Environmental Design (LEED). But usage and maintenance are major factors in how energy-efficient any building actually proves to be. That’s why MIT has rolled out a new system that monitors the performance of buildings on campus and delivers the gathered data to the Department of Facilities in real time.

“There’s a mindset among designers that an efficient building design will lead to an efficient building,” says Nick Gayeski SM ’07, PhD ’10, co-founder of KGS Buildings, which developed the Clockworks software MIT is using to monitor a wide range of performance metrics. “In practice, that may or may not be true. You’ve got to measure and manage buildings’ performance no matter how well designed they are for energy efficiencies.”

Launched in 2010, the Clockworks system has already helped the Institute realize $286,000 in annual energy savings in steam, chilled water, and electricity by revealing faulty valves in one LEED-certified lab building that is only 10 years old.

“These realized benefits in a ‘newer’ building demonstrate the importance of installing these systems in buildings of any age,” says Wade Berner, director of systems performance and turnover for MIT Facilities. “As we know, high-performance systems do not always run at peak efficiency; this system provides owners with data to guide adjustments to attain consistent desired performance.” 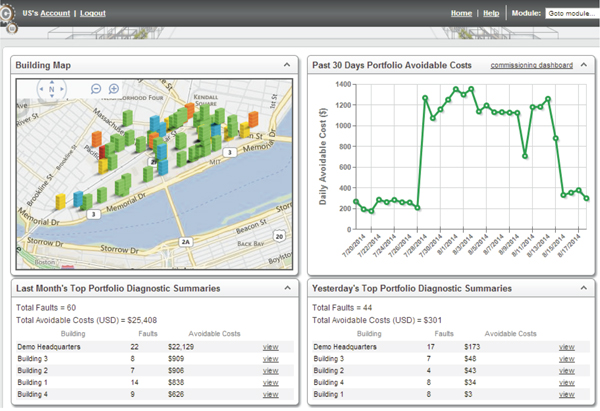 This mockup shows what the Clockworks energy report for MIT looks like online. The numbers shown are for illustration purposes only. Image: KGS Buildings

At MIT, Facilities continually monitors just over 300,000 data points from a wide range of equipment across campus, including everything from air handlers to temperature sensors, according to Aaron Sellers, assistant manager for repair and maintenance in the Department of Facilities. “One air handler may have 20–100 data points associated with it. It depends on the complexity of the equipment design,” says Sellers, explaining that most automation systems, even home thermostats, are equipped to capture data about the environment (such as temperature readings), but in practice the data typically aren’t used for anything more than the functioning of the individual piece of equipment. “[KGS] came up with this idea to do more with [those] data,” he says.

The Clockworks monitoring system provides automated fault detection and diagnostics on a cloud-based platform that enables MIT staffers to see at a glance how equipment is performing. “[These] data [are] immediately available online—we can see the top issues,” Berner says, noting that Clockworks presents staff with inferences about where troubles might lie. “Their system narrows it down. At a minimum, you get to the [malfunctioning] piece of equipment.”

Clockworks also stores data over an extended period of time—providing “trend data,” or the historical record of how well equipment is functioning. Having such data greatly improves staffers’ ability to troubleshoot problems and analyze energy efficiency.

“What everyone needed to know was trend data,” says Sellers, who worked with the company’s founders when they were still perfecting their technology as doctoral students in MIT’s Building Technology Program back in 2009–2010. “If something happened that was catastrophic—say a piece of equipment failed on a Friday night of a long weekend—you would come in on Tuesday to find out what happened and wouldn’t know because the data trend didn’t go back that far,” he says. Since KGS stores data for three years, MIT can now trace issues back in time. “That allows us to put together a picture of what happened.”

Clockworks also holds promise for streamlining MIT’s preventive maintenance program, Sellers says, because real-time monitoring enables maintenance work to be performed based on need rather than a set schedule.

“Maybe we don’t have to change filters twice a year. KGS could send out data showing they’re not dirty until we’re nine months out,” he says. “Or, it could say they’re getting dirty really fast, we should be changing them every three months. That helps the equipment in the long run, and if we can maintain the efficiency of equipment, that equipment will continue to work 20, 30 years down the road.”

Improving the efficiency of equipment and quickly repairing system failures ultimately lead to energy savings. MIT is now working with KGS to document these savings in kilowatt-hours. Doing so will enable the Institute to gain extra benefits though Efficiency Forward, a partnership with the utility NSTAR that provides incentives for reducing electricity use.

Energy efficiency is a key mission for KGS, according to its founders—Gayeski, Sian Kleindienst SM ’06, PhD ’10, and Stephen Samouhos ’04, SM ’07, PhD ’10. The three first worked together on MIT’s team for the 2007 Solar Decathlon, an international solar-powered house competition, and they soon found they shared an ambition—to make buildings better.

“We wanted to have an impact on energy use,” Gayeski says. “Why aren’t buildings energy-efficient today? It’s not all about what can we build. We are in the developed world; these buildings are already consuming energy. So, we decided we’d better deal with existing building stock.”

Samouhos was already developing a building systems fault detection program for his PhD research, so the three students began brainstorming ways to expand that idea into a business. MIT worked with KGS to help it pilot the software on one lab building and offered feedback for improving the product. “Every suggestion we made they took to make the data more usable,” Berner says.

In 2011, MIT expanded the use of Clockworks to five buildings, then to more than 60 in 2012. Today, KGS monitors 84 buildings on campus and is continuing to expand as a company. Headquartered in Somerville, Massachusetts, the business has a staff of 16, and Clockworks is being used to monitor approximately 350 buildings in 12 countries.

Much of the credit for this success is due to MIT, Gayeski says. In addition to getting practical assistance from MIT Facilities, the three KGS founders received guidance from their academic advisors: architecture professor Leslie Norford (Gayeski), former associate professor of building technology Marilyne Andersen (Kleindienst), and Leon R. Glicksman, who is professor of building technology and mechanical engineering and served as co-chair of the MIT Energy Initiative’s Campus Energy Task Force (Samouhos).

“MIT was the place that took a chance on us,” Gayeski says. 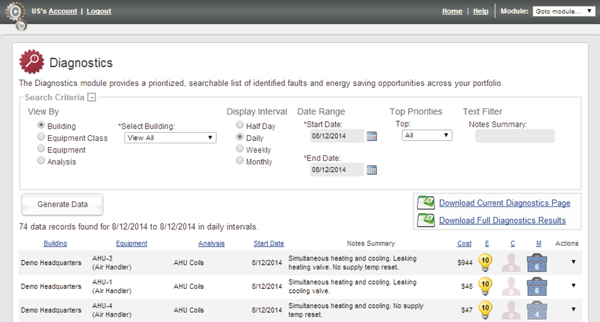 This mockup shows a sample Clockworks report identifying and diagnosing energy waste, uncomfortable conditions, and maintenance issues in selected buildings. The numbers shown are for illustration purposes only.