Accessing critical resources such as geothermal energy and natural gas requires drilling—an expensive, energy-intensive, messy process with today’s technology. An MIT team has been looking into a more elegant approach. Instead of grinding rock to bits, they would use a continuous beam of energy to vaporize it and then blow out the tiny particles that form with a high-pressure stream of injected gas. Using a novel experimental setup and a device used in fusion experiments, the researchers have now vaporized rock for the first time. Based on their experimental and theoretical findings, they conclude that the energy generated by that device—beams of millimeter-long waves—could do what lasers have never done: serve as a cost-effective, efficient means of drilling our way to a cleaner and more sustainable energy future.

Within the United States, the top 10 kilometers of the Earth’s crust contain vast geothermal resources that could increase near-term energy supplies, improve energy security, and reduce greenhouse gas emissions. However, the high cost of drilling hampers the economic exploitation of those resources. According to a 2006 MIT assessment, drilling is responsible for at least half the cost of tapping into geothermal energy. Drilling also plays a key role in the recovery of other energy resources, including the vast deposits of unconventional natural gas recently developed in the United States. Despite the importance of drilling, research to advance the technology focuses largely on improving mechanical approaches—better cutting bits for rotary drills or improved methods of steering—which at best will lead to small, incremental improvements in a mature technology.

“What’s really needed is to look at some new technologies that could potentially make a much bigger breakthrough in the capability for drilling—one that would increase the speed of drilling and lower the cost,” says Paul P. Woskov, senior research engineer at MIT’s Plasma Science and Fusion Center (PSFC). Drilling solely with a directed beam of energy such as a laser would have obvious advantages: There would be no mechanical systems in the borehole to break or wear out, no temperature limit, and equal ease penetrating any type of rock at any depth. But almost five decades of research on laser drilling have not produced a practical system. Indeed, nobody has ever drilled a hole deeper than about a meter using only a laser.

Several years ago, Woskov suggested something that might work better: a beam of electromagnetic radiation with a wavelength of one or a few millimeters—1,000 times longer than the typical wavelengths of infrared laser beams. Most engineers are not aware of “millimeter waves,” but in fusion research—Woskov’s field for 30 years—they are critical for heating and controlling plasmas to the extreme temperatures needed for fusion to occur.

The devices used to produce such waves—called gyrotrons—are highly developed. They can generate a megawatt or more of millimeter-wave power continuously at energy conversion efficiencies of 50%. In contrast, lasers are typically about 10% efficient and do not achieve such high power output when operating in continuous mode. Moreover, continuous-wave, 1-megawatt gyrotron systems are commercially available, rugged enough for field use, and potentially readily adapted for drilling. And some of the world’s leading designers of gyrotrons are located in the PSFC.

In late 2008, Woskov and Dan Cohn, a PSFC research scientist who is now at the MIT Energy Initiative (MITEI), received a seed grant from MITEI to investigate Woskov’s novel concept. Results of initial theoretical analyses confirmed the validity of Woskov’s idea—so convincingly that he received a follow-on grant from MITEI, attracted new MIT and industry collaborators, and received major funding from the geothermal division of the US Department of Energy. 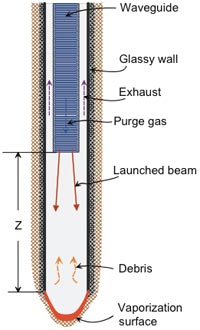 This diagram presents a practical design for Woskov’s concept. The cross section shows a circular borehole, with the vaporization front at the bottom. A metallic waveguide inserted into the borehole directs a millimeter-wave beam from a gyrotron as well as an injected “purge” gas such as air or nitrogen. When the beam reaches the bottom of the borehole, it vaporizes the rock. The vapors formed are quickly cooled by the purge gas and solidify into a plume of nanoparticles. The purge gas blows that debris upward, around the outside of the waveguide, to the surface. Conventional filters cannot capture such tiny particles, so the exhaust would then be bubbled though a collection pond to trap the solids. Recycling the nanoparticles is also a possibility. The particles would be rich in silicon dioxide—a major constituent of vaporized rock—so they could prove valuable to the electronics industry as feedstock for making circuit chips.

Key to this design is the behavior of the millimeter-wave beam. As it emerges from the waveguide, it naturally diverges. It therefore heats up the walls of the hole and makes them glassy, turning the borehole itself into a waveguide that can be effective for kilometers. The glassy walls also seal the borehole as it develops, protecting the underground formation and preventing undesirable leaks. In addition, today’s waveguides for transmitting millimeter-wave beams can be adjusted to concentrate energy at the beam’s edges or center or some combination of the two. That choice, along with the power level, determines the borehole dimensions and rate of penetration. Put more energy at the beam’s edges, and the hole is wider; put more energy in the center, and the hole gets deeper faster. Such beam control cannot be easily achieved when drilling with a stationary laser beam, which inevitably creates a hole that gets narrower with distance. 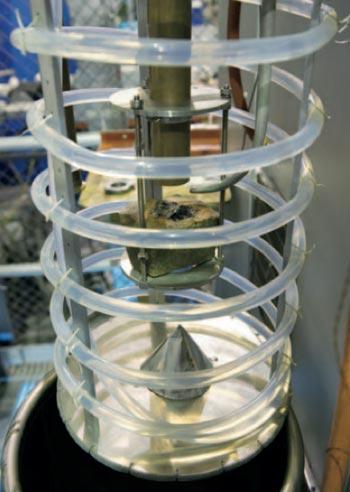 In this setup, a gyrotron at the top sends a continuous millimeter-wave beam through the copper tube toward the rock sample at the center, and water flows through the surrounding coil. During operation, the device is lowered into the steel chamber below and sealed. Based on the flow volume and temperature rise of the water, the researchers can deduce how much of the incoming energy is absorbed by the rock. Photo: Justin Knight

To investigate the viability of millimeter-wave drilling, the researchers performed theoretical analyses of the energy required to heat solid rock until it not just melts but completely vaporizes. Based on those results, they concluded that—unlike a laser—an off-the-shelf gyrotron could cost-effectively deliver enough energy to vaporize rock.

The analyses also confirmed another advantage of millimeter waves: They would pass efficiently through the outward-flowing micron- and submicron-sized particles. When bombarded by particles of that size, energy beams with relatively short wavelengths such as lasers readily scatter. That scattering effect drops off as wavelengths get longer. As a result, the beam of millimeter waves would remain far more cohesive and could deliver more of its energy to the drilling surface.

Given the novelty of the approach, theoretical analysis was not enough. Woskov needed experimental evidence. So he borrowed a 10-kilowatt continuous millimeter-wave gyrotron system used at the PSFC for fusion research and—with help from several PSFC experts—set up an experiment to melt and vaporize rock.

To challenge his concept, they tested one of the hardest, most difficult-to-drill crystalline rocks—granite. They placed the rock inside a specially built test chamber (left), just below the opening of a copper tube that served as a waveguide, and switched on the gyrotron at the top. The millimeter-wave beam quickly melted and vaporized the rock. Using sensitive diagnostic instruments, they monitored the temperature of the rock’s surface as it became mushy, melted, and finally vaporized. The photo below shows the result: an irregular black area of glass melt that has bubbled up and flowed out under the beam. 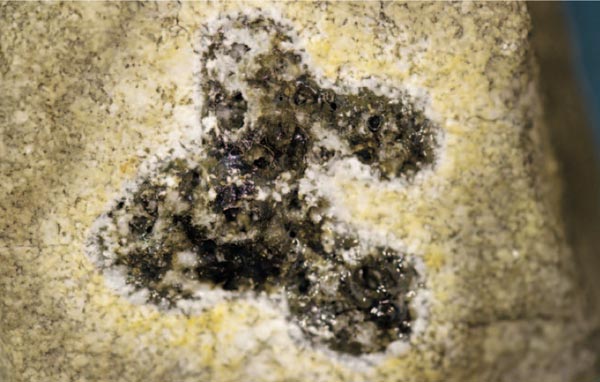 The dark pattern on this granite sample shows where the beam hit the rock, causing it to bubble and vaporize. The new setup enabled the team not only to vaporize rock for the first time but also to take real-time measurements that provided new insights into key thermodynamic properties of rock up to extremely high temperatures. Photo: Justin Knight

Woskov was pleased with their experiments for two reasons: “Not only did we vaporize rock for the first time,” he says, “but we also demonstrated a new laboratory technique that combines localized, high-power heating with sensitive measurements of the dynamics of the material being heated to extreme temperatures—much higher than you could get to in the past in real time.”

The new experimental results brought an unexpected observation: Hot molten rock absorbs millimeter-wave energy far more efficiently than it absorbs infrared radiation from lasers. Thus, as a drilling tool, a millimeter-wave beam has two advantages over lasers: It is less disrupted by outgoing particles, and the energy it delivers is more efficiently absorbed by the melted rock surface. Woskov stresses the importance of those findings for minimizing cost. For a drilling technology to be economical it needs to deliver as much energy as possible to the drilling surface, and the drilling surface needs to take up that energy efficiently.

Based on their new thermodynamic measurements, the researchers estimate that they will be able to drill through hard crystalline rock at rates of up to 100 meters per hour—10 times faster than with current mechanical drilling systems in deep holes. The cost per cubic meter of rock removed (in this case, primarily the cost of electricity) would be lower than with conventional methods and should remain constant with depth, independent of rock hardness or temperature.

For industry audiences, a key source of skepticism about the proposed approach is the absence of “drilling muds”—fluids that are carefully tailored to both remove debris and strengthen the walls by plugging up pores in the rock and providing back pressure that counters inward pressures on the hole. “Deep drilling without drilling mud is unheard of,” says Woskov. Yet he suggests that the glassy, or “vitrified,” walls in his system could be strong enough not only to keep the hole open during drilling but also to withstand the extreme pressures on the finished borehole with no added cement or metal liner.

In the next three years, Woskov and his collaborators will be testing those claims. Their project, now under way, is led by Impact Technologies (Tulsa, Oklahoma), a company with extensive experience and expertise in drilling and related applications in the field. At MIT, Woskov’s group is continuing to investigate the impacts of millimeter waves on rocks; and Herbert H. Einstein, professor of civil engineering, and his group in the MIT Rock Mechanics Laboratory are testing the behavior of the vitrified samples under extreme pressures comparable to those encountered by a borehole. If all goes well, three years from now the MIT and Impact teams will test the millimeter-wave system in an existing borehole, inserting a waveguide, launching a beam, and vitrifying the walls of the hole.

Woskov is pleased to have a drilling company interested in one aspect of his concept—using millimeter waves to seal and strengthen borehole walls. “If we get into one niche of the current established process, we’ll have a foot in the door with this technology,” he says. Given that foot in the door, he is confident that the drilling will come later.

“I think we have the potential to revolutionize drilling, but it’s a completely new approach that will throw out a lot of conventional wisdom. That’s the problem,” says Woskov. He likens it to the 1940s when the aircraft industry was working with mechanical rotary engines and propeller technologies. When the jet engine came along, it was a completely new approach that took away all the mechanics and worked on a jet stream of air. Says Woskov, “It’s the same thing. Drilling technology is in the mechanical age right now, and we want to move it into the jet age”—in this case, the age of directed energy.

This research was supported initially by seed grants from the MIT Energy Initiative. Continuing work is being supported by the US Department of Energy under a subcontract from Impact Technologies (Tulsa, Oklahoma). For further information on the research, see:

This article appears in the Spring 2012 issue of Energy Futures. 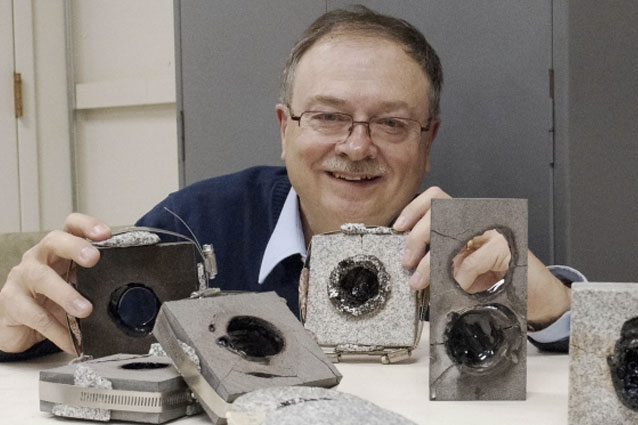