MIT research that promises to keep ice off of airplane wings and make steam turbines and desalination plants more efficient is now moving into another challenging part of our lives: getting that last bit of ketchup out of the bottle.

In the past year, “LiquiGlide”—a nontoxic, super-slippery coating for the inside of condiment bottles—has garnered national media attention. Thousands of fascinated consumers have watched and re-watched videos in which ketchup slides swiftly out of a gently tilted LiquiGlide bottle.

But this technology will do more than just ease the lives of frustrated, bottle-pounding consumers, says Kripa Varanasi, the Doherty Professor of Ocean Utilization, who invented the coating with five members of his lab. According to their calculations, keeping exasperated consumers from throwing out that last bit will save about a million tons of wasted condiments each year. Manufacturers will be able to do away with the big plastic caps they now use on upside-down bottles, saving about 25,000 tons of petroleum-based plastics annually. And the coating will help protect public health because—unlike some nonstick coatings—this one is made completely of flavor-free food materials. “You can eat the coating, and you’re fine,” says Varanasi.

Varanasi and his team didn’t set out to help the food industry. With seed funding from the MIT Energy Initiative, they’ve been designing water-repellent coatings to improve the efficiency and durability of steam turbines—critical components in the generation of 86% of all global power. Other targets include “non-wetting” coatings to increase the freshwater output of desalination plants, to prevent the formation of ice on airplanes and power lines, and to keep methane hydrates from building up and clogging flows in deep-sea oil and gas pipelines.

One approach to making a surface non-wetting is to give it nanoscale roughness and then coat it with a low-surface-energy material, usually a polymer. Air pockets are trapped between the bumps, serving to reduce the contact of the liquid with the surface so it flows off more easily.

But there’s a problem. “Anything you’re trying to repel can actually impale into those features,” says Varanasi. Tiny droplets of the liquid being repelled can replace the pockets of air between the bumps, and the surface quickly goes from non-wetting to highly wetting. With “ice-phobic” coatings, frost can form before ice does, filling up the textured surface and actually accelerating the subsequent buildup of ice—a phenomenon that Varanasi has demonstrated and says could affect airplanes in flight as well as on the ground. 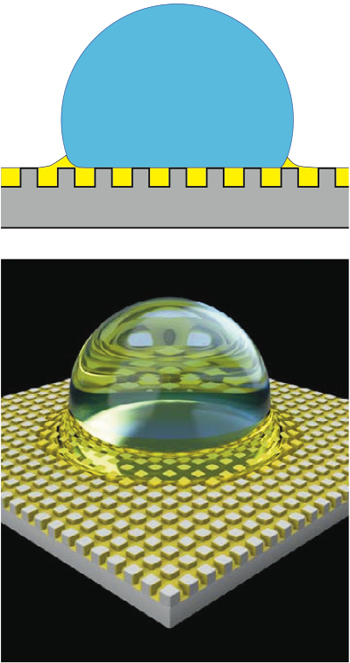 To make their super-slippery coating, the researchers create a textured surface and fill the spaces between the posts with a liquid lubricant. Because the posts are just a millionth of a meter across, the lubricant is held in place by capillary action. The selected lubricant does not mix with the material being repelled, so when a droplet lands, it essentially floats along the lubricant, moving across the surface at an unprecedented speed.

To prevent that behavior, he and his team fill the spaces between the surface textures not with air but with a liquid lubricant that won’t mix with the material being repelled. The bumps on their textured surfaces are posts just a millionth of a meter across—so small that the lubricant in the spaces between them is held firmly in place by capillary action. The resulting structure is durable, resistant to aerodynamic assault, and unfazed in a vacuum. It’s also easy to manufacture. Just dunk the textured material into the liquid lubricant and pull it out, and a thin lubricant layer is left behind in the spaces. Any inconsistencies in the layer—during manufacturing or afterward—“self-heals by capillary wicking,” says Varanasi.

“So you get this highly slippery surface,” he explains. “You can think about it as a coating that’s as slippery as a liquid—like if you pour something on an oil slick—but it’s also as rigid as a solid. So it’s a new paradigm for thinking about coatings.” The new coatings can be applied to materials ranging from glass and plastics to metals and ceramics. Because the MIT team understands the fundamental processes involved, they are able to select materials and surface textures that control how fast deposited droplets slide away. And by adding the lubricant to a textured surface, they can get condensed water droplets to move 10,000 times faster than they do on the same textured surface without the lubricant. Varanasi calls the velocities “just crazy.”

Those experiments involved model surface textures to systematically study the phenomenon, but the technique works with any textured surface. “The beauty of this approach is that you can rely on random textures if they are at the right length scale,” says Varanasi. “It’s pretty forgiving of the type of texture.”

The researchers are continuing to refine and adapt their coatings for different applications. But LiquiGlide has already proved itself a winner. In spring 2012, it was named runner-up in MIT’s $100K Entrepreneurship Competition, and it won that competition’s Audience Choice Award, with a prize of $2,000. In fall 2012, it won the top MassChallenge award, including $100,000. TIME magazine named it one of the best inventions of 2012, and Forbes included it among the best food innovations of the year. And the list goes on.

In August 2012, Varanasi and Smith formed LiquiGlide Inc., a startup company located in Cambridge, Massachusetts. They expect to have commercially available coatings in the next year or two.

For more information about the technology, see the following publications: