MIT researchers have made major strides toward developing solar cells that are inexpensive, efficient, flexible, and transparent using a design that combines two special components. Microscopic fibers called nanowires rapidly carry electrons liberated by solar energy through the solar cell to a flexible, transparent electrode made of graphene, a form of carbon that occurs in one-atom-thick sheets. Using a novel approach involving solutions and relatively low temperatures, the researchers were able to attach those two components together, “growing” nanowires directly on graphene in their lab. Tests with assembled solar cells showed that incorporating the nanowires pushed up device efficiency and that there was no performance penalty for replacing a conventional high-cost, brittle electrode with their version made of abundant, inexpensive carbon.

In the past decade or so, scientists and engineers have begun making photovoltaic solar cells out of organic—that is, carbon-containing—materials rather than inorganic silicon. The potential benefits are many. Conventional silicon solar cells require expensive, meticulous, step-by-step processing and careful handling to be sure they’re not damaged during transport and installation. In contrast, organic solar cells can be manufactured using inexpensive, continuous “roll-to-roll” processing in which individual layers are deposited sequentially on large areas of material. The finished organic cells are lightweight, flexible, and transparent, so they’re easy to handle and can be installed on roofs, windows, electronic device displays, and other surfaces, both flat and curved.

However, two problems have slowed development of this promising technology. First, organic solar cells can’t yet convert visible light into electricity as efficiently as their silicon counterparts can. And second, researchers haven’t been able to find a flexible, transparent, low-cost material for the electrode that carries current out of the cell. Silvija Gradečak, the Thomas Lord Associate Professor in Materials Science and Engineering, and a team of collaborators from four MIT departments have come up with methods of dealing with both of those problems.

The challenge with conversion efficiency, says Gradečak, is getting the right geometry inside the organic cell. Any solar cell requires two materials—a “donor” material that absorbs incoming solar energy and gives off energized electrons, and an “acceptor” material that picks up those electrons and carries them to the electrode, where they exit the device as electrical current. In the usual organic solar cell, two polymers act as the donor and acceptor materials, and they need to be intertwined to provide lots of interfaces for the jumping electrons. The difficulty is controlling the nanometer-scale structure inside the organic cell to achieve those interfaces while providing pathways for the rapid movement of electrons to maximize the current coming out of the device.

To solve that problem, Gradečak has been working to make a “hybrid” solar cell by replacing one of the organic polymers with an inorganic material that will move the electrons more efficiently. But she adds a special twist: She makes the inorganic material into nanowires, microscopic fibers that are a few billionths of a meter in diameter and millions of times longer. Each nanowire is a single crystal, with an extensive surface area and no defects to interfere with the flow of electrons. And Gradečak’s group—the Laboratory for Nanophotonics and Electronics— has an unmatched ability to grow nanowires at any length, diameter, and density desired.

With this approach, there’s no need to worry about interconnecting regions of polymers. The electron-donor material can surround a “forest” of tall, solid nanowires—an overall structure that’s predictable and stable and maximizes contact between the two materials (see the figure below). Assembling the solar cell involves growing the nanowires up from a transparent electrode, infiltrating that forest with the polymer or other electron-donor material, and topping it off with a second electrode. When the solar cell is in use, light enters through the transparent electrode, and electrons knocked loose from the donor material move into nearby nanowires. The electrons travel rapidly through the nanowires to the transparent electrode, out along an external circuit, and back to the second electrode. 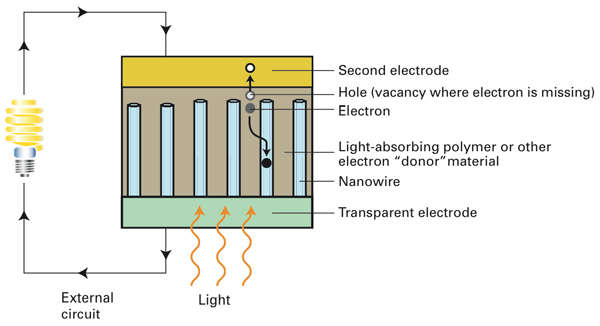 To test their design, Gradečak and her collaborators grew nanowires on a transparent electrode and then deposited a solution containing the donor material on top. Images with a scanning electron microscope (SEM) showed that the solution infiltrated deep into the nanowire array, making good contact with the nanowire surfaces and leaving few voids to reduce performance. And in experiments with fully assembled devices, the presence of the nanowires pushed up efficiency by as much as 35%, depending on the donor material used.

Those results confirm the viability of their hybrid approach. “By combining the organic and inorganic materials, we bridge the advantages of both worlds,” says Gradečak. “We get solar cells that can be processed at a large scale using roll-to-roll methods, but they can still have reasonable power conversion efficiencies.”

One material that has recently grabbed the attention of researchers worldwide is graphene, a form of carbon that occurs in one-atom-thick sheets and has remarkable characteristics: It’s not only cheap and abundantly available but also highly conductive, flexible, robust, and transparent. To explore its viability as a transparent electrode, Gradečak teamed up with one of the world’s leading experts on graphene, Jing Kong, MIT’s ITT Career Development Associate Professor of Electrical Engineering and director of the Nanomaterials and Electronics Group in the Research Laboratory of Electronics.

The first question was whether they could grow nanowires on graphene while preserving the special properties of each component. “It turns out that this is not a trivial thing to do,” says Gradečak. The usual way to grow nanowires made of zinc oxide—their material of choice—is to deposit a “seed” layer of zinc oxide a few nano-meters thick on a piece of silicon, ITO, or other substrate and then immerse the structure in a solution containing zinc and oxygen ions. The zinc oxide nanowires quickly grow straight up from the surface. Because zinc oxide has a crystalline structure, the nanowires grow from individual crystals in the seed layer to form a forest of tall, skinny wires.

But when Gradečak and her colleagues tried to deposit the necessary seed layer on graphene, the zinc oxide solution separated into droplets rather than forming an evenly distributed coating. The problem is that the structure of graphene is extremely stable, with the carbon atoms in each sheet tightly connected with one another in a hexagonal pattern. As a result, graphene repels water, so the zinc oxide solution beads up instead of spreading out. Other researchers have tried to grow nanowires on graphene by first roughening up the graphene surface using an oxygen plasma, but that approach destroys the graphene, and the properties of the nanowires are not well known.

To preserve the integrity of the materials, Gradečak and her team tried a different approach: using an “inter-layer” between the graphene and the zinc oxide. They identified two commercially available polymers that would do the trick. The polymers would “wet” the graphene, covering the entire surface with a thin coating on which the zinc oxide could disperse. Better still, the polymers are electrically conductive and chemically compatible with zinc oxide, and they won’t interact strongly with the graphene, so it should remain both transparent and conductive.

To test this approach, the team grew zinc oxide nanowires on graphene with the polymer interlayer and on ITO, the standard transparent electrode material, under identical conditions. The results are shown in the SEM images below. The top images show nanowires grown on ITO, viewed from two angles; the bottom images show them grown on graphene with the polymer interlayer. The images confirm that the nanowires grown on the two materials are comparable in their uniformity, shape, and alignment. “So we can grow nanowires on graphene, and the quality of the nanowires is equal to or better than those grown on ITO,” says Gradečak. 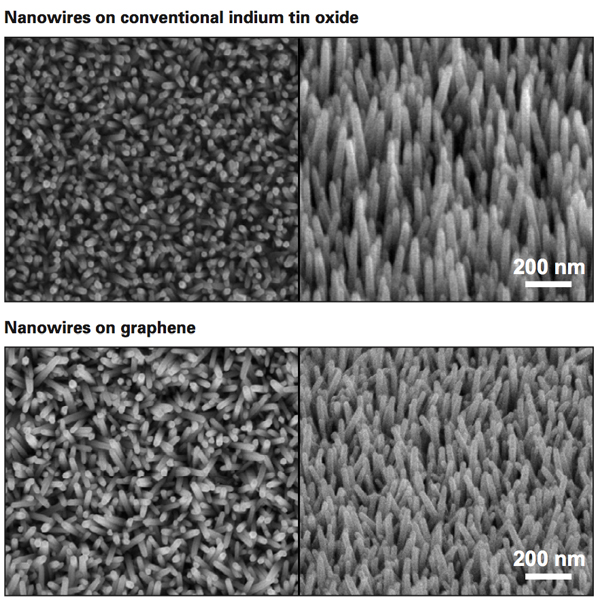 These scanning electron microscope (SEM) images show zinc oxide nanowires grown on indium tin oxide, or ITO (top), the conventional electrode material used in flexible solar cells, and on graphene (bottom), a flexible, transparent form of ubiquitous, inexpensive carbon. To grow nanowires on graphene, the MIT team had to develop a new deposition process that involves first laying down a thin layer of a carefully selected polymer. The SEM images confirm that their approach yields nanowires that are similar in size, shape, and alignment to those grown on ITO, a material that is both costly and brittle.

The final step was to test the performance of complete solar cells, which team members assembled as shown in the schematic diagram below. First they stacked three monolayers of graphene on quartz, their sample surface. Then they deposited the polymer interlayer followed by the zinc oxide seed layer, the nanowires, the electron-donor material, and finally a second electrode of gold on a thin layer of molybdenum oxide. To test their options, they used this approach to assemble devices with each of their polymer interlayers—called PEDOT and RG-1200—and with two versions of the donor material: a polymer called P3HT and lead-sulfide quantum dots, which are tiny chunks of light-absorbing material that can be tuned to absorb a wide range of wavelengths of light. For comparison, they grew all the same devices on ITO electrodes. 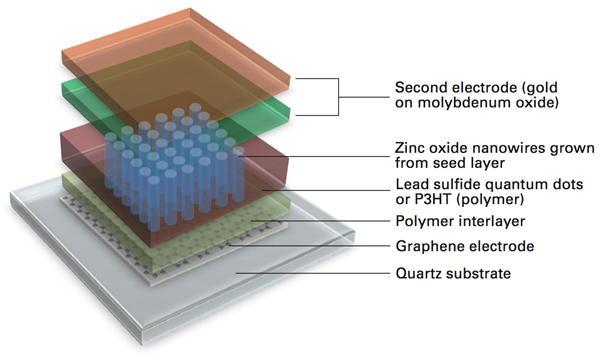 The figure below presents sample results from experiments with the quantum dot devices. The curves show how much current can be extracted at different voltages under the standard illumination used in such tests. The red curve shows results when the polymer interlayer is PEDOT, the blue curve when it is RG-1200. The black curve presents data from the device grown directly on ITO. The performance of the devices with the different interlayers is similar to one another and—more significantly—to that of the ITO-based device. In other tests, the devices with nanowires, quantum dots, and graphene electrodes achieved power conversion efficiencies of 4.2%—less than the efficiency of general-purpose silicon cells but competitive for specialized applications. 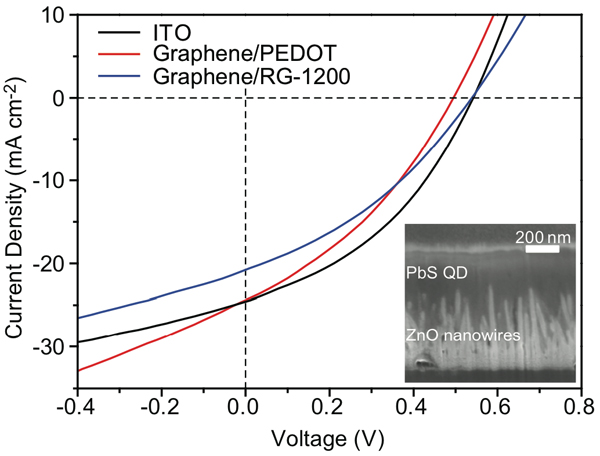 This diagram presents results from experiments with devices made with zinc oxide nanowires and lead-sulfide quantum dots. The red and blue curves show results from devices grown on graphene electrodes with a polymer interlayer of PEDOT and of RG-1200, respectively. The black curve shows results from a device grown directly on an ITO electrode. Measurements of current extracted at differing voltages are similar for all three devices, confirming the viability of using the inexpensive graphene electrode without sacrificing device performance.

Gradečak is pleased with those results. “We’ve shown that the polymers we use to make devices on graphene don’t interrupt the flow of electrons out of the device,” she says. “Our results show that we can replace the ITO electrode with graphene without sacrificing device performance.” Moreover, their simple low-temperature, solution-based method of depositing nanostructured materials on graphene without altering its structure or properties may be useful in fabricating novel versions of other optoelectronic devices, such as light-emitting diodes, lasers, and photodetectors.

The researchers are continuing to improve the performance of their solar cells, for example, by optimizing the size and spacing of the nanowires to maximize surface area, the amount of infiltrated electron-donor material, and the interface between the two. And they’re beginning to assemble their devices on other surfaces, including aluminum foil and lightweight plastics. “In our graphene-based solar cells, all the active components—the nanowires, polymers, and quantum dots—as well as the electrodes are flexible,” says Gradečak. “We’re now beginning to deposit them on flexible substrates, and that’s extremely exciting.”

This research was supported by Eni S.p.A. under the Eni-MIT Alliance Solar Frontiers Program. Eni is a Founding Member of the MIT Energy Initiative. Further information can be found in:

This article appears in the Autumn 2013 issue of Energy Futures.