Dan Wesolowski looked out from the second floor of MIT’s Building E25, watching in dismay as students and faculty alike ignored signs to use the revolving door below him and save energy. Person after person coming from the nearby Kendall Square subway walked through the swing door to the side of the revolving door.

“A single person walking through a revolving door in February saves enough energy to light a 60-watt light bulb for 23 minutes,” said Wesolowski, a fourth-year PhD candidate in materials science and engineering. If everyone used the revolving doors, MIT would save about $7,500 in natural gas a year in E25 alone, which has two of the 29 revolving doors on campus.

The MIT Energy Initiative (MITEI) is now supporting a student plan to encourage that behavior.

Wesolowski and three classmates started their Revolving Door Campaign a couple years ago as part of a project for a class in sustainability and planning in the department of urban studies. In tests around campus, their 11- x 17-inch signs saying “Help Conserve Energy, Please Use the Revolving Door” improved revolving door use to 65 percent from 23 percent. Based on those results, MITEI is providing funds for printing and installing pedestal-mounted signs at five revolving doors across campus.

“I didn’t set out to be a revolving-door activist,” Wesolowski admitted. “But once I crunched the numbers I saw an opportunity to save energy. Every time you feel a breeze, that’s energy blowing out the door.” The energy savings have to do with heat transfer: revolving doors prevent the free exchange of conditioned indoor air with outdoor air.

The project was one of seven selected earlier this year by MITEI’s new Student Campus Energy Project Fund. The fund makes money available twice yearly to students to undertake projects in line with the Energy Initiative’s Campus Energy Task Force. The task force recently issued another request for proposals, with a submission deadline of October 1. The fund was seeded by MITEI with $10,000, plus a supplemental donation of $5,000 from Shell Oil Company.

The other projects funded in the first round include:

“This first round of projects is just the tip of the iceberg,” said Steven Lanou, deputy director of MIT’s sustainability program and a member of the grant review committee. “With another round of funding available this semester, I expect to see the ingenuity and creativity of student projects continue to grow and inspire us to do more to reduce our energy footprint and lead with innovative approaches.”

While the projects do place a demand on students’ time, they can be a welcome diversion from daily studies, said Tarek Rached, a second-year student going for a master’s degree in technology and policy. “This is relaxing,” he said. Rached and fellow student Steven Peters are involved in the Energy Map Project, which is designed to reduce energy use in MIT’s buildings. 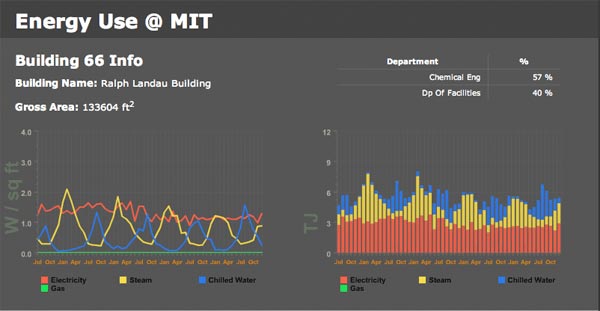 These charts show historical energy use by MIT’s Building 66, which houses the offices and laboratories of the Department of Chemical Engineering. With MITEI support, students are now creating similar web-based fact sheets for each MIT building as they work to develop a method of informing building occupants how much energy their building is using — information they hope will spur energy-saving changes in behavior.

Energy consumption in buildings accounts for the vast majority of campus energy use and produces more than 90 percent of MIT’s greenhouse gas emissions, but most buildings are used without any feedback to the occupants and operators. The project aims to develop tools to measure and analyze MIT’s campus energy use, such as the energy map.

The students are now getting monthly data from MIT’s Department of Facilities on energy use in MIT buildings dating back five years. “The next phase is to launch an automated display system to get real-time data on the Web so people can see what is going on in their building,” Rached said. “We want to get people involved to change behavior.”

That includes getting incoming freshmen involved in campus energy activities from the get-go. Austin Oehlerking, a senior, became interested in sustainable energy after taking a course during Independent Activities Period last year. He changed from studying economics and finance to mechanical engineering. Oehlerking was instrumental in developing the orientation booklet for 2007 to get freshmen interested in sustainability communities throughout MIT. “There are at least 12 different student groups,” he said. “There are so many different projects going on that it is hard for people to grasp. The booklet is a great opportunity for them to find their niche among sustainability efforts on campus.”

Oehlerking said he’s seen a marked increase in interest in energy since he was a freshman at MIT. “A lot of people didn’t know about energy initiatives, including me,” he said. “I’ve seen a major shift in interest in the past couple years because of events like the $100K competition, which is seeing a lot more energy business plans and creating huge excitement among undergraduates. I’ve also seen a huge change since MIT President Susan Hockfield came in and focused on energy.”