By 2020, the state of Massachusetts is committed to reducing its greenhouse gas emissions at least 25 percent compared with 1990 levels, all while up to 25 percent of its electricity generation facilities are expected to go offline. Angling to shore up its energy resources without driving up emissions levels, the state recently passed a bill requiring Massachusetts to procure long-term contracts that tap 1,600 megawatts of offshore wind power and 1,200 megawatts of hydropower or other renewables by 2025. (One megawatt can power up to 1,000 homes.) Massachusetts Governor Charlie Baker, who signed the bill into law, argues that a significant infusion of Canadian hydropower will be needed to enable the state to meet its impending energy and climate deadlines.

Aiming to equip decision-makers in the New England/Québec region with the knowledge they’ll need to evaluate this and other cross-border, low-carbon energy and climate policy options, the MIT Joint Program on the Science and Policy of Global Change and two Montréal-based research institutions — the business school Hautes Études en Commerce (HEC), and Ouranos, a climate-change think tank — launched a new collaboration on energy, economy, and climate policy analysis at a signing ceremony on Aug. 28 in Boston. 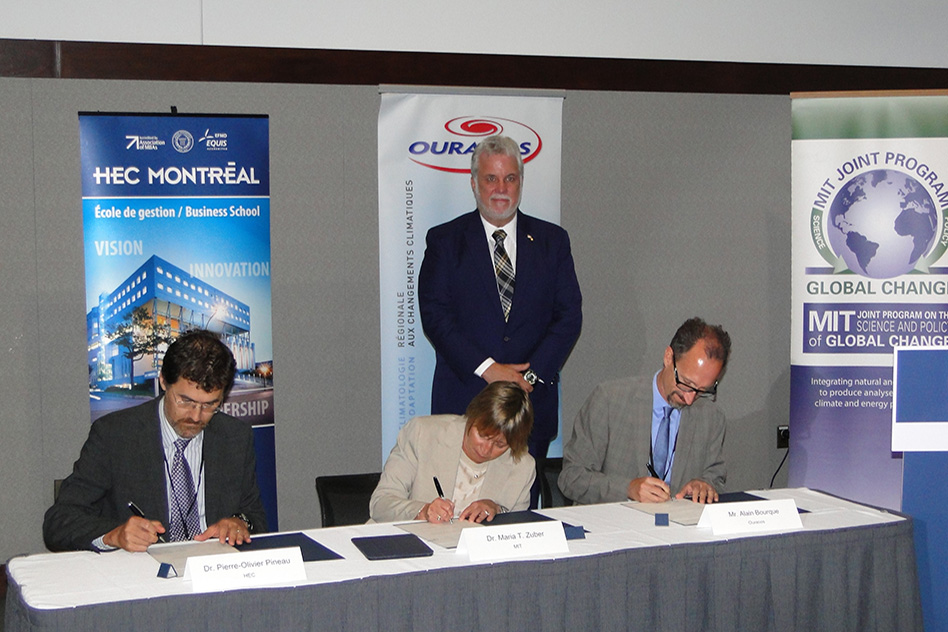 Convened during the Conference of New England Governors and Eastern Canadian Premiers, the ceremony featured remarks by representatives of all three signatories, including MIT Vice President for Research Maria Zuber on behalf of the Joint Program; by Éric Martel, president and CEO of Hydro-Québec, a state-owned electricity supplier and one of the world’s leading producers of hydropower; and by Québec Premier Philippe Couillard.

“New England, Québec, and the Eastern Provinces of Canada have strong ties through trade and an important opportunity to work and to contribute to a solution to climate change by providing clean energy at a reasonable cost to consumers,” said Zuber. “This research collaboration can help to provide a shared foundation for the development of sound energy strategies in New England, Québec, and beyond.”

“Hydro-Québec is proud to announce its participation in this research project,” said Martel. “At Hydro-Québec, we are convinced of the necessity of such studies which will help decision-makers to choose low-carbon energy policy options for the New England and Québec region. So what could be better than to bring together some of the top researchers in the field, those working at MIT, Ouranos, and HEC Montreal?” said Martel. “Hydro-Québec is happy to be part of such promising, forward-looking research.”

“We want to … take this opportunity to become even more efficient in terms of dropping our emissions and mitigating and adapting North America to climate change,” he said.

The primary goal of the initiative is to develop advanced technical analysis in support of energy, economic, and climate-related decision-making by public and private sector leaders in New England and Québec. Informed by that goal, the three parties will work together to develop modeling tools needed to examine the economic relationships between New England and Québec.

These new tools will enable the researchers to perform integrated assessments of energy/economic/climate policy in Québec and New England, which will be needed to demonstrate how expanding hydropower in New England and other proposed policies to integrate low-carbon, renewable energy sources into the regional electricity system, will benefit Québec, individual New England states, and the region as a whole.

The initiative also aims to model the energy, economic, and climate impacts of the Western Climate Initiative (WCI), a framework for developing carbon cap-and-trade systems among the California and several Canadian provinces. By modeling Québec — and potentially Ontario and other provinces and states — researchers could model energy and economic relationships among existing and prospective WCI members, enabling each to better understand the economic and environmental implications of participation in the WCI.

Each party to the new research collaboration contributes unique expertise. The MIT Joint Program has substantial experience in developing global and regional energy-economic models that simulate the economywide effects of different policies and technologies; HEC Montréal provides significant expertise in the energy sector, with a focus on electricity markets and climate policy, and in-depth knowledge of Québec’s policies and energy system; and Ouranos contributes a strong capability to evaluate climate policy risks and opportunities.

All three research groups are united in their quest to provide an evidence-based foundation for policy throughout the region that addresses climate change and promotes a clean energy future, which Zuber described as the “defining issue of our time.”

“Climate change is a global problem, but one that will affect all of us, regionally and personally,” she observed. “I am full of optimism that by working together, we can create a future that we and our children and our grandchildren will want to live in.” 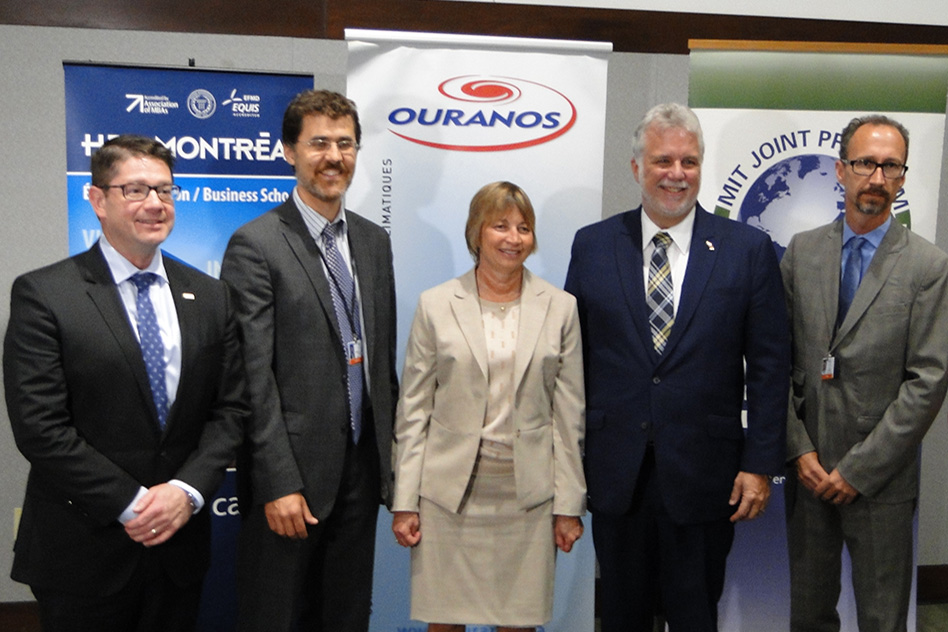