Challenges and opportunities inherent in protecting the city and surrounding areas

On Sept. 21, MIT faculty spoke to a packed room of impassioned citizens concerned about the effects of climate change at the Boston Athenaeum’s”Sink or Swim” event. The intriguing title references the challenges and opportunities inherent in protecting the city and surrounding areas as sea levels rise and major storms increase. The topics presented included a closer examination of infrastructure and environmental concerns, as well as social and economic impacts.

The MIT panel — offering both warnings and hope — featured Alan Berger, a professor of landscape architecture and urban design and co-director of the Center for Advanced Urbanism; Professor Markus J. Buehler, head of the Department of Civil and Environmental Engineering (CEE); and Kerry Emanuel, the Cecil and Ida Green Professor of Atmospheric Science in the Department of Earth, Atmospheric and Planetary Sciences. MIT Chancellor Cynthia Barnhart, the Ford Foundation Professor of Engineering with an appointment in CEE, served as moderator.

The Athenaeum is a membership-based, private library — and one of Boston’s most historic and renowned intellectual and cultural institutions. This program was open to the public to help drive broader stakeholder appeal and support. MIT President L. Rafael Reif and his wife, Christine, plus several MIT students were in attendance, while other students watched the event streamed live in both Pierce and Parsons labs on campus.

Some of the scientific predictions mentioned to occur without intervention included:

Emanuel’s talk helped the audience connect Boston’s past with its future, but cautioned the lack of predictability of New England’s weather means greater uncertainty and complexity, further exacerbating design planning and mitigation efforts. He cited Hurricane Sandy in 2012 as a good example.

“Before Hurricane Sandy hit New York and New Jersey, scientific estimates showed a storm of that size and intensity would occur only every 400-500 years,” he said. “So that was a very rare storm that we didn’t expect. Now, with projections that sea levels will rise faster this century compared to the past 50 years, future storm risks and impacts could be even that much more severe.” 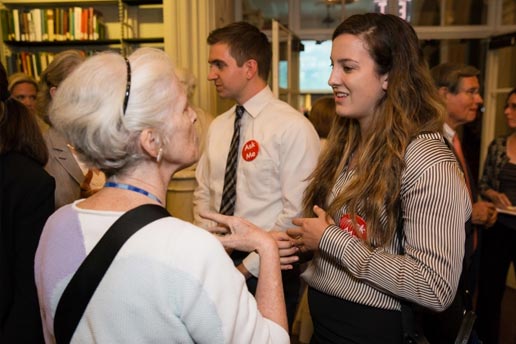 Madison Noteware, an MIT senior in civil and environmental engineering, converses with attendees during the event reception.

Buehler presented ‘Engineering a Resilient Future.’ He described all the ways civil and environmental engineers tackle the effects of climate change today, and how advances in fundamental scientific understanding enable examination of the pressures on infrastructure and society to drive new engineering solutions. He added that we now have a more comprehensive view of our changing world than ever before — from structural and large-scale systems, research, and implementation, to environmental science innovation.

Researchers tracking global warming now see impacts across a broad societal spectrum, including to structural materials, crop yield, air and water quality, energy management, and even pest migration (which spreads disease). Everything is connected, Buehler explained, so it’s critical to coordinate civic planning and action among many seemingly-disparate fields.

“Mitigating the effects of climate change will take innovation and entrepreneurship” Buehler concluded. “The solutions may not be presented here tonight or even by the majority of people sitting in this room. Instead, the future’s solutions may be resting in the heads of the students studying at MIT right now.”

“This comment hit home with me,” said Madison Noteware ’16. “I look forward to my career past MIT and I want to make sure I contribute to coming up with solutions. Maybe my work will need to be modified or combined with others’. But through collaboration, hopefully we’ll make the world a better place. The Civil and Environmental Engineering (Course 1) curriculum definitely prepares me to think about interdisciplinary research and where even small-scale change can have big-scale impact.”

Berger talked about various strategic initiatives to manage urban flooding — including breakwater dams and “sponge parks” which are wet or dry depending on conditions — as well as more controversial up-zoning or down-zoning which could displace people or lift buildings multiple stories higher off the ground to save structures and lives.

He also presented a hypothetical scenario to better manage rising sea levels and storms for a Boston Harbor neighborhood. His plan included so-called “resilient districting.” This term refers to leveraging a geographic area’s natural layout and encouraging each district to identify and prepare its unique defenses rather than surrounding the whole area with a water barrier, which could break and destroy everything. He welcomed feedback and different ideas.

“I greatly enjoyed hearing from the several faculty members from different departments who are working together on the same topic,” commented Luke Schiferl, a MIT PhD candidate in CEE. “It highlights MIT’s ability to work together on common problems.” Noteware also added that she was impressed with how “real” the discussion was.

“The faculty did not try to portray their solutions for Boston as the only, or even the right, ones,” she said. “The professors also encouraged audience-based discussion and were open to opposing or contradicting proposals. It’s this humility and inclusiveness of new ideas, even from our top professors, that makes MIT unique and a great place for research.”

CEE sophomore Clio S.L. Macrakis said that the presentations were very relevant and topical to her coursework.

“I’m taking 1.101 [Introduction to Civil and Environmental Engineering Design] to gain a more hands-on approach to environmental, social, and structural problems in the Boston area. I appreciate that we are studying Boston, because it is easy and accessible to relate to as an MIT student. … Boston is also a great city to study from an environmental point of view, because it is so close to sea level, and therefore prone to infrastructure damage as sea level rises.”

After the session ended, an audience member asked the MIT students where she could get more information about the effects of climate change.

“That question seems like one of the best outcomes of this type of event,” Macrakis said.

Anyone interested in continuing the dialogue about ways science and engineering can help achieve infrastructure innovation to drive sustainability and economic development, are invited to attend the Infrastructure Innovation for a Changing Environment conference hosted by CEE on Nov. 20 on the MIT campus.