Achieving a future in which everyone has access to affordable, plentiful power — while decarbonizing global energy systems to address climate change and protect our environment — takes numerous sustained, collaborative efforts across all sectors around the world. The MIT Energy Initiative (MITEI) and GE have committed to work together on solving these challenges as GE becomes a Sustaining Member of MITEI with $7.5 million in funding for advanced technology R&D over a five-year period.

As part of its membership, GE will engage with four of MITEI’s Low-Carbon Energy Centers, focusing on solar energy; energy storage; electric power systems; and carbon capture, utilization, and storage.

On Tuesday, MITEI and GE launched their collaboration with a half day of meetings on MIT’s campus to discuss current MIT research and technology advancements, and how GE’s global businesses can work with MITEI to move these technologies toward commercialization and adoption.

In her opening remarks, Maria Zuber, MIT’s vice president for research, discussed MIT’s Plan for Action on Climate Change and the importance of engagement with industry. “With research collaborations that are multidisciplinary and multisectoral, like the Low-Carbon Energy Centers, we can identify the economic, social, political, and regulatory barriers that prevent good technologies from scaling, and then together we can develop strategies for surmounting those barriers,” she said.

“Working closely with industry to solve practical problems in the real world has been a hallmark of MIT’s approach for well over a century. We are delighted to have this chance to work with GE,” Zuber added. 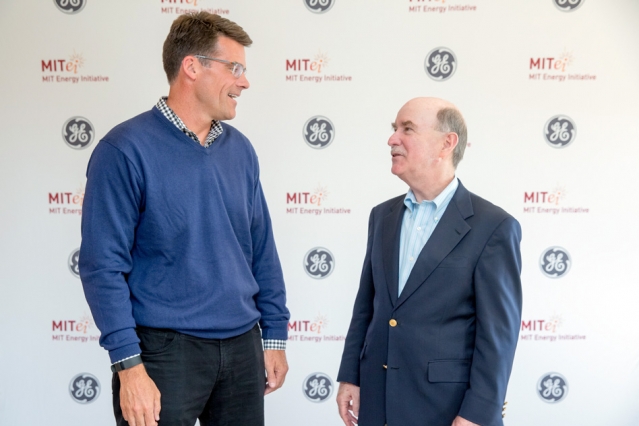 “Thank you for partnering with us at MIT and with the MIT Energy Initiative in trying to address what I think is one of the world’s greatest energy challenges today, which is: How do we get more energy to people who don’t have it globally and simultaneously decarbonize the energy system?” Armstrong said in the live broadcast. “I look at this as a win-win-win: MIT wins [by getting] good, tough problems to work on with our students and faculty; GE wins by getting to commercialize really interesting technologies; and the world wins because we can help to solve these really big problems.”

“We’re very excited, and it’s really part of our ongoing commitment as a business to bring power to the world. Today, GE technology generates about a third of the world’s electricity, so we have a long-term vested interest,” Bolze said.

“The power of this relationship is the impact we can have around the world.”

MIT faculty and MITEI staff led breakout sessions with GE Power’s senior leadership team on areas of mutual interest and expertise, with potential for future collaboration. The sessions included discussions on bringing down costs of solar energy, developing energy storage to provide ready access to electricity from renewable energy technologies, creating the robust electric power systems of the future, bringing electricity to rural populations in India and other areas of the world, and decreasing carbon emissions from conventional energy technologies through carbon capture, utilization, and storage.

In the energy storage session, Jessika Trancik, the Atlantic Richfield Career Development Professor in Energy Studies, described recent research showing that there is a current window of opportunity for energy storage to be economically adopted for wind and solar projects — an area of particular interest for GE’s businesses that are involved in developing renewable energy systems.

Another session reflected MIT and GE’s overlapping interests in understanding, training, and building the workforce of the future — including interpreting big data to aid in decision-making, promoting creativity within organizations, and examining the role of robots in the workforce.

“We’re finding that robot-human collaborations enable us to accomplish tasks that we couldn’t do separately,” said Jeffrey Lipton, a postdoc in MIT’s Computer Science and Artificial Intelligence Laboratory. “We can provide more access for people with disabilities to work in manufacturing.”

“We’re thrilled to have GE as a member and a participant in our Low-Carbon Energy Centers,” said Louis Carranza, associate director of MITEI, who spearheads development of these centers. “These meetings — full of in-depth discussions of research areas we can explore together through our new relationship — marked a great beginning to our engagement.”