A total of more than $2 million was awarded to 14 projects, each lasting up to two years. The funded projects span four of MIT’s five schools and nine departments.

As in the past, the call for proposals welcomed submissions on any energy-related topic, but this time, MITEI’s industry members particularly encouraged projects focusing on “big data.” In response to the call, MITEI received a total of 54 proposals. Some of the funded projects are highlighted in the following paragraphs.

Funding for the new grants comes chiefly from MITEI’s Founding and Sustaining Members, supplemented by funds from John M. Bradley ’47, SM ’49 and an anonymous donor, and gifts from other generous alumni. Alumni contributions help expand the scope of the Energy Research Seed Fund Program and enable participation of faculty from across the Institute.

To date, the seed fund program has supported 117 early-stage research proposals, with total funding of more than $14 million. 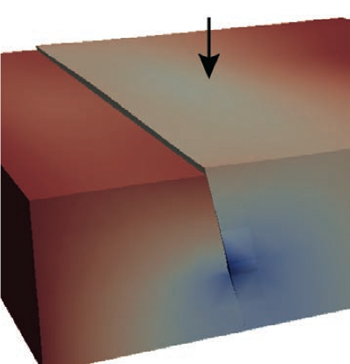 This graphic shows ground deformation and fault slip created by fluid injection underground, as predicted by a coupled flow-geomechanics simulation. Colors denote horizontal displacements in the direction perpendicular to the fault. Ruben Juanes and Bradford Hager aim to elucidate the potential for fluid leakage along such faults.

How large is the impact of transportation infrastructure on economic growth and the demand for energy?  A new perspective from China, as seen from outer space, 1972-2011
David Donaldson, Economics