Joy Dunn ’08: Bridging careers in aerospace manufacturing and fusion energy with a focus on intentional inclusion

“A big theme of my life has been focusing on intentional inclusion and how I can create environments where people can really bring their whole authentic selves to work,” says Joy Dunn ’08. As the head of operations at Commonwealth Fusion Systems, an MIT spinout working to achieve commercial fusion energy, Dunn looks for solutions to the world’s greatest climate challenges—while creating an open and equitable work environment where everyone can succeed.

This theme has been cultivated throughout her professional and personal life, including as a Young Global Leader at the World Economic Forum and as a board member at Out for Undergrad, an organization that works with LGBTQ+ college students to help them achieve their personal and professional goals. Through her careers both in aerospace and energy, Dunn has strived to instill a sense of equity and inclusion from the inside out.

Developing a love for space 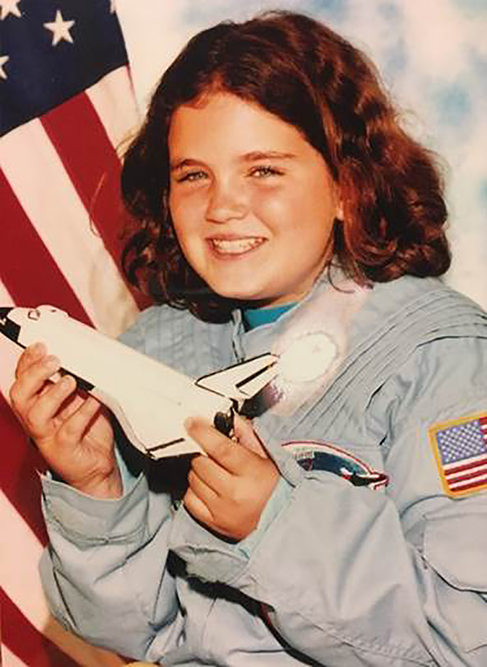 As Dunn was growing up, her parents supported her interest in space and space exploration. Here she is at space camp, where she learned what it takes to be an astronaut and had fun building and launching model rockets. Courtesy of Joy Dunn.

Dunn’s childhood was shaped by space. “I was really inspired as a kid to be an astronaut,” she says, “and for me that never stopped.” Dunn’s parents—both of whom had careers in the aerospace industry—encouraged her from an early age to pursue her interests, from building model rockets to visiting the National Air and Space Museum to attending space camp. A large inspiration for this passion arose when she received a signed photo from Sally Ride—the first American woman in space—that read, “To Joy, reach for the stars.”

As her interests continued to grow in middle school, she and her mom looked to see what it would take to become an astronaut, asking questions such as “what are the common career paths?” and “what schools did astronauts typically go to?” They quickly found that MIT was at the top of that list, and by seventh grade, Dunn had set her sights on the Institute.

After years of hard work, Dunn entered MIT in the fall of 2004 with a major in aerospace, aeronautical, and astronautical engineering (AeroAstro). At MIT, she remained fully committed to her passion while also expanding into other activities such as varsity softball, the MIT Undergraduate Association, and the Alpha Chi Omega sorority.

One of the highlights of Dunn’s college career was Unified Engineering (Course 16), a year-long course required for all AeroAstro majors that provides a foundational knowledge of aerospace engineering—culminating in a team competition where students design and build remote-controlled planes to be pitted against each other. “My team actually got first place, which was very exciting. And I honestly give a lot of that credit to our pilot. He did a very good job of not crashing!” In fact, that pilot was Warren Hoburg ’08, a former assistant professor in AeroAstro and current NASA astronaut training for a mission on the International Space Station.

Pursuing her passion at SpaceX 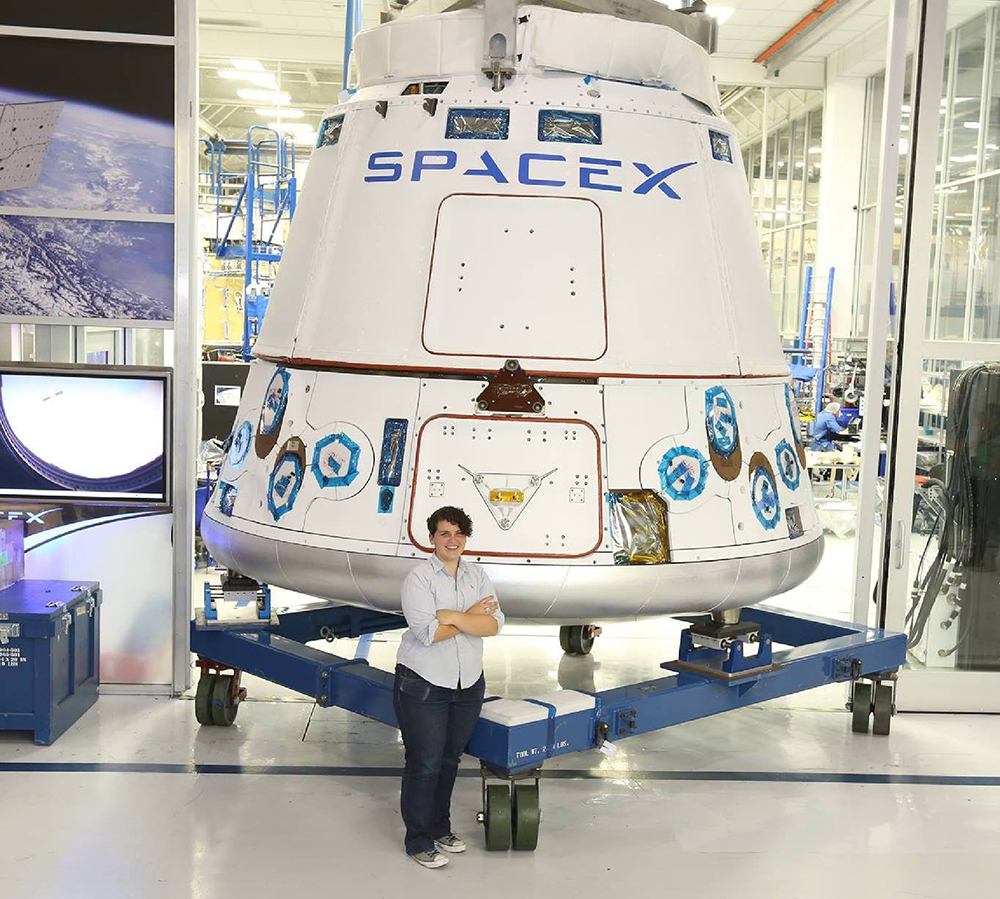 An MIT internship at SpaceX led to Dunn’s being hired as a propulsion development engineer at the company, where she helped build the thrusters for the Dragon spacecraft. After several promotions, she became the senior manager responsible for building the whole vehicle. Courtesy of Joy Dunn.

Dunn’s undergraduate experience culminated with an internship at the aerospace manufacturing company SpaceX in the summer of 2008. “It was by far my favorite internship of the ones that I had in college. I got to work on really hands-on projects and had the same amount of responsibility as a full-time employee.”

By the end of the internship, she was hired as a propulsion development engineer for the Dragon spacecraft where she helped to build the thrusters for the first Dragon mission. Eventually, she transferred to the role of manufacturing engineer. “A lot of what I’ve done in my life is building things and looking for process improvements,” so it was a natural fit. From there, she rose through the ranks, eventually becoming the senior manager of spacecraft manufacturing engineering where she oversaw all the manufacturing, test, and integration engineers working on Dragon. “It was pretty incredible to go from building thrusters to building the whole vehicle,” she says.

During her tenure, Dunn also co-founded SpaceX’s Women’s Network and its LGBT affinity group, Out and Allied. “It was about providing spaces for employees to get together and provide a sense of community,” she says. Through these groups, she helped start mentorship and community outreach programs, as well as helped grow the pipeline of women in leadership roles for the company.

In spite of all her successes at SpaceX, she couldn’t help but think about what came next. “I had been at SpaceX for almost a decade and had these thoughts of, ‘do I want to do another tour of duty or look at doing something else?’ The main criteria I set for myself was to do something that is equally or more world-changing than SpaceX.”

A pivot to fusion

It was at this time in 2018 that Dunn received an email from a former mentor asking if she had heard about a fusion energy startup called Commonwealth Fusion Systems (CFS) that worked with the MIT Plasma Science and Fusion Center. “I didn’t know much about fusion at all. I had heard about it as a science project that was still many, many years away as a viable energy source.”

After learning more about the technology and company, “I was just like ‘holy cow, this has the potential to be even more world-changing than what SpaceX is doing.’” She adds, “I decided that I wanted to spend my time and brainpower focusing on cleaning up the planet instead of getting off it.”

After connecting with CFS CEO Bob Mumgaard SM ’15, PhD ’15, Dunn joined the company and returned to Cambridge as the head of manufacturing. While moving from the aerospace industry to fusion energy was a large shift, she said her first project—building a fusion-relevant, high-temperature superconducting magnet capable of achieving 20 tesla—tied back into her life of being a builder who likes to get her hands on things.

Over the course of two years, she oversaw the production and scaling of the magnet manufacturing process. When she first came in, the magnets were being constructed in a time-consuming and manual way. “One of the things I’m most proud of from this project is teaching MIT research scientists how to think like manufacturing engineers,” she says. “It was a great symbiotic relationship. The MIT folks taught us the physics and science behind the magnets, and we came in to figure out how to make them into a more manufacturable product.” 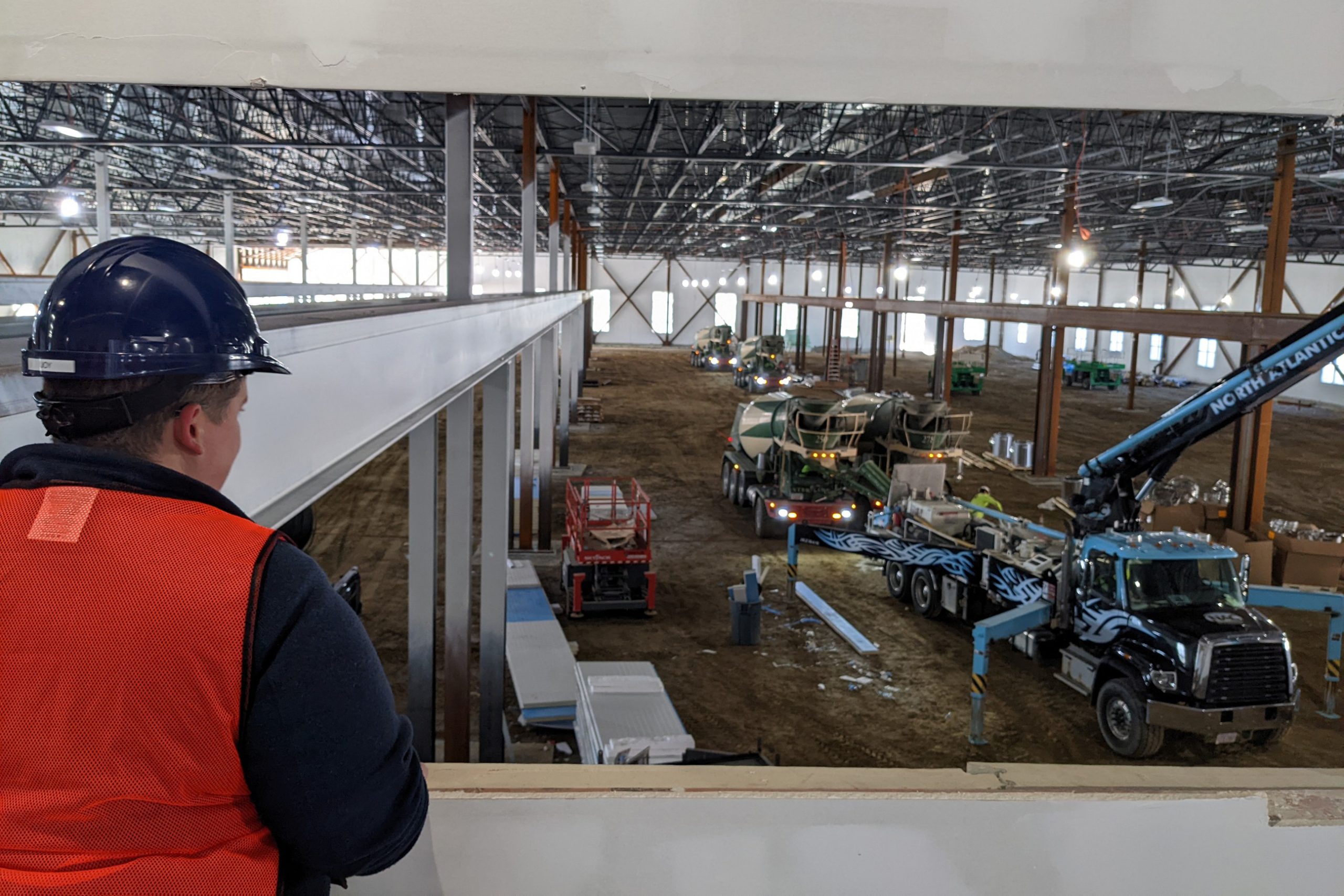 Dunn inspects progress on the construction of the new CFS campus in Devens, Massachusetts, where facilities will house the company’s manufacturing operations and its SPARC fusion device. Dunn is now head of operations, responsible for manufacturing, facilities and construction, safety, and quality. Courtesy of Commonwealth Fusion Systems.

In September 2021, CFS tested this high-temperature superconducting magnet and achieved its goal of 20 tesla. This was a pivotal moment for the company that brought it one step closer to achieving its goal of producing net-positive fusion power. Now, CFS has begun work on a new campus in Devens, Massachusetts, to house their manufacturing operations and SPARC fusion device. Dunn plays a pivotal role in this expansion as well. In March 2021, she was promoted to the head of operations, which expanded her responsibilities beyond managing manufacturing to include facilities, construction, safety, and quality. “It’s been incredible to watch the campus grow from a pile of dirt…into full buildings.”

In addition to the groundbreaking work, Dunn highlights the culture of inclusiveness as something that makes CFS stand apart to her. “One of the main reasons that drew me to CFS was hearing from the company founders about their thoughts on diversity, equity, and inclusion, and how they wanted to make that a key focus for their company. That’s been so important in my career, and I’m really excited to see how much that’s valued at CFS.” The company has carried this out through programs such as Fusion Inclusion, an initiative that aims to build a strong and inclusive community from the inside out.

Dunn stresses “the impact that fusion can have on our world and for addressing issues of environmental injustice through an equitable distribution of power and electricity.” Adding, “That’s a huge lever that we have. I’m excited to watch CFS grow and for us to make a really positive impact on the world in that way.”