An MIT researcher has a vision: 400 huge offshore wind turbines providing onshore customers with enough electricity to power several hundred thousand homes-and nobody standing onshore can see them. The trick? The wind turbines are floating on platforms a hundred miles out to sea, where the winds are strong and steady.

Today’s offshore wind turbines usually stand on towers driven deep into the ocean floor. But that arrangement works only in water depths of about 15 meters or less. Proposed installations are therefore typically close enough to shore to arouse strong public opposition.

Paul D. Sclavounos, a professor of mechanical engineering and naval architecture, has spent decades designing and analyzing large floating structures for deep-sea oil and gas exploration. Observing the wind-farm controversies, he thought, “Wait a minute. Why can’t we simply take those windmills and put them on floaters and move them farther offshore, where there’s plenty of space and lots of wind?”

In 2004, he and his MIT colleagues teamed up with wind-turbine experts from the National Renewable Energy Laboratory (NREL) to integrate a wind turbine with a floater. Their design calls for a tension leg platform (TLP), a system in which long steel cables, or “tethers,” connect the corners of the platform to a concrete-block or other mooring system on the ocean floor. The platform and turbine are thus supported not by an expensive tower but by buoyancy. “And you don’t pay anything to be buoyant,” said Sclavounos. According to their analyses, the floater-mounted turbines could work in water depths ranging from 30 to 200 meters. In the Northeast, for example, they could be 50 to 150 kilometers from shore. And the turbine atop each platform could be big-an economic advantage in the wind-farm business. The MIT-NREL design assumes a 5.0 megawatt (MW) experimental turbine now being developed by industry. (Onshore units are 1.5 MW, conventional offshore units, 3.6 MW.)

Ocean assembly of the floating turbines would be prohibitively expensive because of their size: the wind tower is fully 90 meters tall, the rotors about 140 meters in diameter. So the researchers designed them to be assembled onshore-probably at a shipyard-and towed out to sea by a tugboat. To keep each platform stable, cylinders inside it are ballasted with concrete and water. Once on site, the platform is hooked to previously installed tethers. Water is pumped out of the cylinders until the entire assembly lifts up in the water, pulling the tethers taut.

The tethers allow the floating platforms to move from side to side but not up and down-a remarkably stable arrangement. According to computer simulations, in hurricane conditions the floating platforms-each about 30 meters in diameter-would shift by one to two meters, and the bottom of the turbine blades would remain well above the peak of even the highest wave. The researchers are hoping to reduce the sideways motion still further by installing specially designed dampers similar to those used to steady the sway of skyscrapers during high winds and earthquakes. 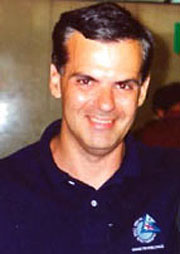 Professor Paul D. Sclavounos and his colleagues are designing giant floating wind turbines that can be tethered to the ocean floor a hundred miles offshore.

Sclavounos estimates that building and installing his floating support system should cost a third as much as constructing the type of truss tower now planned for deep-water installations. Installing the tethers, the electrical system, and the cable to the shore is standard procedure. Because of the strong offshore winds, the floating turbines should produce up to twice as much electricity per year (per installed megawatt) as wind turbines now in operation. And because the wind turbines are not permanently attached to the ocean floor, they are a movable asset. If a company with 400 wind turbines serving the Boston area needs more power for New York City, it can unhook some of the floating turbines and tow them south.

Encouraged by positive responses from wind, electric power, and oil companies, Sclavounos hopes to install a half-scale prototype south of Cape Cod. “We’d have a little unit sitting out there and.could show that this thing can float and behave the way we’re saying it will,” he said. “That’s clearly the way to get going.”