Economist Christopher Knittel uncovers surprising facts about the cars we drive — and about the price of gas. 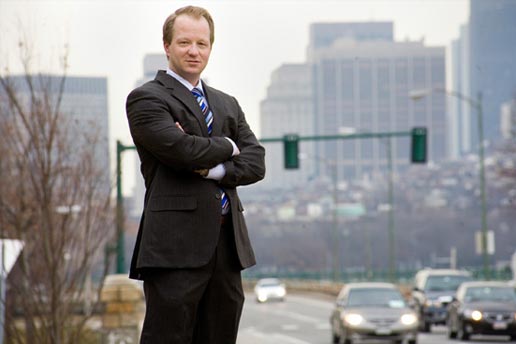 Like a lot of economists, Christopher Knittel entered college with career plans in mind. Unlike a lot of economists, Knittel had plans that involved baseball. At California State University at Stanislaus, Knittel was good enough to make the team as a second baseman. But during his freshman season, reality sank in. “I quickly learned the pros weren’t in my future,” says Knittel, a lifelong Oakland A’s fan who played baseball recreationally until his mid-30s.

For a while in college, Knittel also considered becoming an attorney. But then, he says, “I took my first economics course and fell in love with it. Economics teaches you how to think and you constantly see real-world examples of the concepts you’re learning.”

Today, Knittel is the William Barton Rogers Professor of Energy Economics at the MIT Sloan School of Management, having joined MIT earlier this year. He is known for inventive, heavily empirical work largely focusing on energy and transportation, although he has studied electricity markets and corporate strategies as well.

Knittel’s research addresses a clutch of practical and linked questions: How much progress have automakers made on fuel efficiency? (More than you might think.) How do car owners respond when fuel prices rise? (They really do ditch their gas-guzzlers.) How large are the collateral health benefits of removing dirty vehicles from the nation’s fleet? (Very large.)

All told, Knittel has produced concrete findings that he hopes will have an impact in the halls of Washington. “A lot of energy policies that we have are not the most efficient policies,” he says. “I want to inform policymakers what the true costs and benefits of certain policies are.”

Knittel mostly grew up in Northern California, where his father was an engineer for Peterbilt, the truck manufacturer. In addition to baseball, he developed a liking for cars and learned to replace the engine in his Ford Mustang while in high school.

“A lot of my work draws on the hard sciences,” says Knittel, 39. “Davis was great, but there’s no place like MIT, in terms of the opportunities to do quality interdisciplinary work.”

In a sense, Knittel is still looking under the hoods of cars. One of his papers, “Automobiles on Steroids,” recently published in the American Economic Review, examines technological progress in the auto industry. From 1980 through 2006, the fuel efficiency of America’s vehicles has increased by just 15 percent — at first glance, a lethargic rate of improvement. But as Knittel points out, cars’ average horsepower has roughly doubled since then, and average curb weight of those vehicles rose 26 percent during that time. Adjusting for these changes, fuel economy has actually increased by 60 percent since 1980, but as Knittel observes, “most of that technological progress has gone into [compensating for] weight and horsepower.”

On the stagnation of overall fuel efficiency since 1980, Knittel adds, “It’s no fault of the manufacturers and consumers. Firms are going to give consumers what they want, and if gas prices are low, consumers are going to want big, fast cars. If you’re going to blame anyone, it’s the policymakers for not creating the incentive structure for putting that technological progress into fuel economy.”

Pain at the pump

Cars and light trucks produce about 15 percent of U.S. greenhouse gases. The best policy for reducing energy consumption from those sources, Knittel believes, would be higher fuel prices. “That would incentivize all the things we want,” Knittel says. “When gas prices go up, people shift to more fuel-efficient cars, they drive fewer miles, and insofar as there are lower-carbon-intensive fuels out there, people shift to them. They get rid of their clunkers faster.”

That’s not just an assumption; Knittel has studied the responses of auto owners nationwide to rising gas prices from 1999 to 2008 in another research paper, “Pain at the Pump,” co-authored with Meghan Busse and Florian Zettelmeyer of Northwestern University. The researchers found that with each $1 rise in the price of gas, purchases of highly fuel-efficient autos increase 21 percent, while purchases of gas-guzzling vehicles drop 27 percent.

A shift to newer, more fuel-efficient vehicles would actually help people in another way, besides releasing fewer greenhouse gases: It would reduce the amount of harmful local pollution in the air, as Knittel detailed in a paper written with Ryan Sandler of U.C. Davis, based on a study of California from 1998 to 2008. “When gas prices go up, you’re getting bigger mileage reductions from cars that are worse in terms of these pollutants,” Knittel observes.

That produces significant health benefits beyond the problems associated with climate change. “We’re talking about asthma attacks and respiratory problems,” he adds. “This isn’t just a matter of helping the world two generations from now. You can point to this and say, ‘Here is a more immediate, salient reason for a gas tax.’” According to Knittel and Sandler, 70 percent of the costs of a gas tax of $1 per gallon could be recouped by immediate health benefits from reduced pollution. Other possible benefits from the tax — reductions in climate change, traffic congestion and accidents — could make it a net winner for people in economic terms alone.

But will politicians ever impose higher gas prices on a financially stretched public? A variety of powerful lobbying interests in Washington oppose such a move — and Knittel knows hardball when he sees it. Indeed, Knittel is examining the financial rewards industries reap from their lobbying efforts in some of his current research. Still, he does retain a sense of optimism. “The idealistic academic in me says that the more you broadcast the truth, the more likely it will be to win out,” Knittel says. “But we’ll see.”

Investors awake to the risks of climate change

At the MIT Energy Initiative’s Fall Colloquium, finance executive Poppy Allonby laid out the current state of sustainability thinking among the investor class.