The message was blunt, to the point, and urgent:

“We know enough so we have to act. We’re in a fix and we have to fix it,” said Frances Beinecke, President of the Natural Resources Defense Council. In a special colloquium hosted by the MIT Energy Initiative on Oct. 7, Beinecke warned that symptoms and signs of global warming are unmistakable, and that worldwide climate change is occurring faster than studies had projected.

So time is running out, and to avoid catastrophe, she told the MIT audience of faculty, staff, and students, “we have to bring new technologies into the marketplace to help us avoid the worst consequences of climate change.”

Such technologies are those that reduce the flow of greenhouse gases into the air. The necessary technologies include better batteries, wind and solar power systems, more efficient electronic devices and appliances, and effective ways to reduce emissions of carbon dioxide, especially the massive flow from coal-fired power plants.

“What is fundamental is releasing technology. You need to get to work and make it happen,” she advised.

Beinecke did note that the Obama Administration is moving forward on the issue of carbon control, even though Congress probably won’t succeed in getting carbon-control laws enacted before the upcoming world climate conference in Copenhagen in early December. Thus the U.S. Environmental Protection Agency is already crafting new rules to control smokestack emissions under existing Clean Air Act authority.

Beinecke was introduced by MIT President Susan Hockfield as “one of America’s most articulate advocates for the environment,” and she said that Beinecke’s organization, the NRDC, has become “the nation’s untiring environmental conscience.” She added that Beinecke has “a remarkable legacy of achievement,” and that progress already made “did not happen by accident.”

In her lecture, Beinecke noted that “I love coming to MIT. There’s so much enthusiasm going into the energy area. And boy, do we need it! This is a place where we can truly solve problems” related to energy production and energy conservation.

But, she warned, the issues being confronted are both political and scientific. Groups that oppose carbon limits, such as the U.S. Chamber of Commerce, are tenacious, well-funded, and clever, willing to raise all the public fears they can to block progress.

“We’re in the political phase right now,” she explained, “and it’s tough, really tough, I can tell you.”

Still, some cracks in the wall of resistance are appearing. Some major U.S. industrial firms, including large oil companies and electric utilities, have recently quit the U.S. Chamber of Commerce, disputing its adamant stand against energy conservation and pollution control. As the CEO of a major North Carolina power company put it, Beinecke said, “they’d rather be at the table than on the menu.”

“The Chinese are out there doing it, while we’re only talking about it,” Beinecke said. “(President) Obama is doing the right things, but he needs support from the Congress and the public.”

She also pointed to the upside to pollution control. “There are large opportunities there. New technologies can create new jobs-and help solve the problems of global warming.”

As for the signs of global warming-and related phenomena-Beinecke said it’s clear that Arctic sea ice is melting, sea levels are rising, the amount of carbon dioxide in air is increasing, and water in the seas is becoming more acidic.

It’s now predicted, she added, that if carbon dioxide is not controlled, the acidity of the oceans will double by the end of this century, “and that will ripple all the way down the food chain” as some sea creatures lose the ability to make their hard parts-seashells.

All this shows that “action is very important,” she added. “Mother Nature is just chemistry, biology, and physics. And we can’t avoid obeying her rules.” 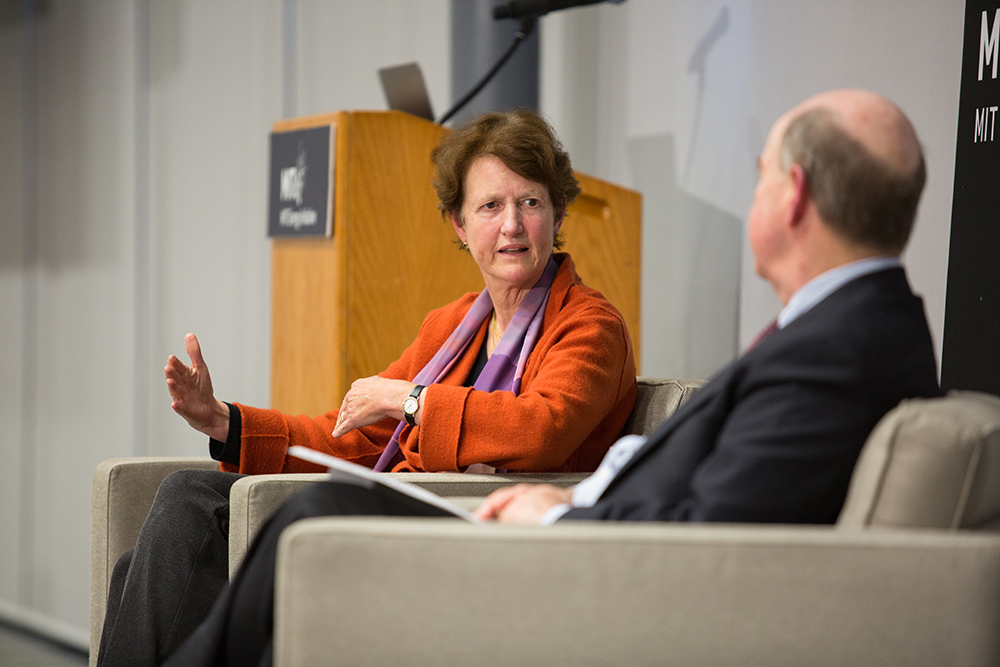