MIT will save $3.5 million on energy this year and broadly advance sustainability across campus thanks to five years of work by the MIT Campus Energy Task Force—and the effort continues to build momentum, according to Theresa M. Stone, who chaired the task force up until she retired as executive vice president (EVP) and treasurer earlier this fall.

What began with an energy audit and a small seed fund has grown to engage the whole MIT community—from individual “Green Ambassadors” who spread sustainable practices through the workplace, to the Institute itself, which recently teamed up with NSTAR to create a new model of corporate energy efficiency.

In 2006, when the Campus Energy Task Force was founded as a pillar of the MIT Energy Initiative (MITEI), a new era began at MIT—one in which faculty, staff, and students would coordinate their efforts to help MIT “walk the talk” on energy efficiency and sustainability while offering new learning opportunities using the campus as a living energy laboratory.

“We really have got all the different parts of the MIT community together in ‘Walk the Talk,'” says Leon R. Glicksman, professor of building technology and mechanical engineering and task force co-chair.

Charged with leveraging the expertise of MIT’s diverse community and tapping into MIT’s research resources to minimize the Institute’s energy footprint, the task force includes faculty members from all five schools; the directors of Facilities, Student Life, and Environment, Health, and Safety; other key administrative and support staff members; and both undergraduate and graduate students. Glicksman now co-chairs the task force with EVP Israel Ruiz, who took over the position after Stone retired this fall.

“The task force has helped build a base of allies across campus that’s been very helpful in supporting our energy efficiency goals,” says Walter E. Henry, director of the Systems Engineering Group for the Department of Facilities.

For example, MIT replaced all the radiator steam traps in one East Campus dorm and then left its twin dorm unrepaired to test the impact of better heat regulation. “What they showed was that the repair saved 50% of the energy used to heat the dorm,” Glicksman says. “The savings paid off the cost of the work in less than a year.”

Students have also been enlisted through the Student Campus Energy Project Fund, which MITEI established in 2008. Student teams compete for $1,000 awards from the fund, which has provided 38 grants in the past three years—supporting such projects as a dorm competition to reduce electricity use and development of a campus energy use map.

“It was a good way to engage students,” Lanou says. “The benefits have been mutual: we have gained new insights into our own campus, and students have deployed emerging technical and leadership skills.”

Inspired by the task force’s early successes, Jeff Silverman ’68 donated $1 million and David desJardins ’83 gave $500,000 in 2009 to seed further campus projects. “They liked that MIT had a plan and a robust measurement and verification process that would increase the impact of their support for MIT,” Lanou says.

MIT’s impressive track record also led to a long-term partnership between MIT and its utility company, NSTAR. The partnership was unveiled in May 2010 and is designed to support the Commonwealth of Massachusetts’ aggressive energy-efficiency goals. “NSTAR asked MIT to create a new model for delivering large-scale energy efficiency programs,” Lanou says. The result, a program called Efficiency Forward, centers on a long-term agreement between the Institute and the utility and aims to save MIT $50 million over the lifetime of the energy-efficiency projects undertaken through the program.

With MIT serving as the pilot, the objective is to inspire other businesses to enter into similar agreements. MIT’s commitment is to save 34 million kilowatt-hours within three years—15% of the Institute’s total electricity use. NSTAR will provide incentive financing, energy-efficiency tools, and expertise to help MIT reach its target. In the program’s first year, MIT surpassed its savings goal for the year by 30%. 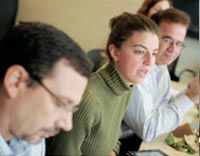 In addition to working to improve the efficiency of existing buildings, MIT has also made a concerted effort to ensure that its new buildings are as energy efficient as possible—aiming for Leadership in Energy and Environmental Design (LEED) Gold certification for both the new Sloan School of Management and the Koch Institute for Integrative Cancer Research buildings. Designed to use 30% less energy than a typical new lab building, “the new Koch building is much more efficient—and performing even better than we anticipated,” Henry says. “We also set very aggressive goals for the Sloan building, and it is meeting or exceeding those goals.”

“Could we do more? Yes, we could always do more,” Glicksman says. But MIT’s efforts have already earned recognition. Just this year, the City of Cambridge gave MIT its GoGreen Award; the Northeast Energy Efficiency Partnership named MIT a “Business Leader for Energy Efficiency”; and Massachusetts Interfaith Power and Light honored the Institute for “Leading by Example.”

Looking forward, Glicksman says he is working with members of MITEI’s Energy Education Task Force to put more resources into using the campus as a living laboratory for energy innovation. “In the next phase, I hope we can raise money for full-time grad students to do more energy research on campus and continue to build on our strong foundation of engaging the entire community,” he says.

“So far, our energy cost reduction efforts have focused on relatively straightforward work and measures that use tested technology,” Henry says. “In the next few years we will have exhausted that pool and will move toward more complicated measures. Collaboration among faculty, staff, administration, and students will become even more important in those efforts.”