Much attention is focusing on special crystalline structures that contain tiny pores ideal for storing important materials such as carbon dioxide, hydrogen, and water vapor. But so far they are not widely used because they collapse when exposed to even a little moisture. Now, an MIT chemist has developed novel versions of these porous “frameworks” that can actually soak in water for days with no harm done. His frameworks are made from inexpensive, easy-to-assemble molecular building blocks, and they can be fine-tuned for various functions, including adsorbing water at variable levels of humidity—a good feature for energy-efficient systems designed to cool indoor air. He’s now working to maximize the amount of water stored, and he’s looking at other applications ranging from desalination systems and battery materials to gas separations and catalysis.

In the search for energy savings, a good place to look is at buildings. In the United States, running buildings uses almost 75% of all electricity consumed and generates about 40% of all carbon dioxide emitted. Air conditioners alone use almost 7% of that electricity, which translates into fully 5% of total national consumption. “If we could make air conditioners more energy efficient, that would put a huge dent in our energy consumption and carbon emissions,” says Mircea Dincă, assistant professor of chemistry.

Instead of using environmentally unfriendly refrigerants and inefficient cooling cycles, Dincă asks us to “reimagine air conditioners using high-surface-area adsorbents” to help relocate unwanted heat. He notes that this idea isn’t new with him and his research group. “Where we come in,” he says, “is making new materials that can adsorb water more efficiently and in much higher concentration than ever before.”

His work focuses on the heat pump, a device that moves heat from indoors to outdoors (or depending on the design, vice versa) using little energy and an environmentally benign working fluid such as water. In the optimal design, the heat pump is made up of two boxes connected by hoses. One box is inside the house and partially filled with water; the other is outdoors and contains a porous material. To start out, the water in the indoor box evaporates, taking heat out of the household environment in the process. Pressure builds up, and the water vapor flows to the outdoor box. There, it’s adsorbed into the porous material, releasing its heat to the outdoor atmosphere. Aided by a bit of energy—preferably from a renewable source—the water is then condensed and pumped back to the indoor box to start the cycle again. Carefully timed valves open and close to ensure that the flow goes the right way and is as continuous as possible.

This energy-efficient, environmentally friendly device can remove heat in homes, in office buildings, and even in big factories that need large-scale heat mitigation. But today’s heat pumps do not perform as well as they could, according to Dincă. What’s needed is a porous material with a far higher internal surface area. Molecules like to cling to surfaces. Fill an empty cylinder with a porous material, and the molecules will cling onto all the interior surfaces of the pores—nearer to one another than they would be in the empty cylinder. The more porous the material, the higher the internal surface area and the more sites the molecules have to cling to.

With heat pumps, replacing the current adsorbent with a more porous one could significantly improve performance. Work toward that end has focused on zeolites, materials that look like rocks but actually contain tiny channels, each about 1 nanometer wide—not unlike the dimensions of a molecule. Zeolites are widely used in industry, for example, as catalysts in gasoline production and as adsorbents in detergents. But their uses are limited because they’re not very “tunable.” They’re composed of silicon, aluminum, and oxygen, so it’s hard to change their composition, structure, or properties to suit a particular application.

Attention has therefore focused on porous structures called metal-organic frameworks, or MOFs. These structures are built of metal nodes connected by “ligands” made of organic (carbon-containing) molecules. As shown in the diagram below, they can be 1-dimensional chains or 2-dimensional layers or 3-dimensional frameworks with varied shapes, which present empty channels where gases or vapors can be stored. 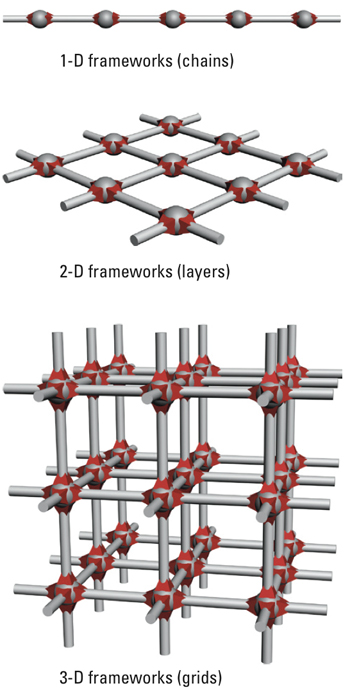 MOFs are almost endlessly tunable because their composition isn’t set. “Instead of just silicon, aluminum, and oxygen, MOFs can be made from pretty much any element of the periodic table. You can mix and match,” says Dincă. “Now the possibilities in terms of structure and function are virtually endless.”

Researchers worldwide are working to take advantage of the many remarkable features of MOFs, but what started all the excitement, notes Dincă, was their surface area. “MOFs have the highest surface areas of any known materials,” he says. “If you could unfold all the material in a single gram of MOF, you’d get 5,000 square meters of surface area—enough to cover an entire football field.” That’s five times more area than offered by the best zeolites and represents significant storage capacity for important applications. For example, a cylinder filled with a MOF can hold twice as much hydrogen or nine times as much carbon dioxide (CO2) as it can when it’s empty. The implications for designing fuel tanks for hydrogen cars or temporary storage systems for CO2 captured from power plants are significant.

MOFs would seem the ideal porous material for a highly efficient heat pump—except for one problem: MOFs break down when they’re exposed to water. Indeed, MOFs are so sensitive that even a brief exposure to atmospheric moisture causes the complete decomposition and collapse of their porous structure. As a result, promising MOF-based technologies now being developed for hydrogen and carbon storage—as well as for catalysis, gas separations, and other industrially important processes— haven’t yet been deployed.

To tackle the water sensitivity problem, Dincă and his team decided to explore novel MOF compositions. They focused on the weakest link within any MOF: the piece of the organic ligand that links to the metal node. The typical connector—a carboxylic acid—makes that link via a metal-oxygen bond, which is unstable in water. The MIT team decided instead to try pyrazoles, which are five-member rings of carbon and nitrogen atoms. Nitrogen atoms in pyrazoles bond far more strongly with metals than oxygen atoms do, so the resulting MOF should be more stable to water as well as to heat. 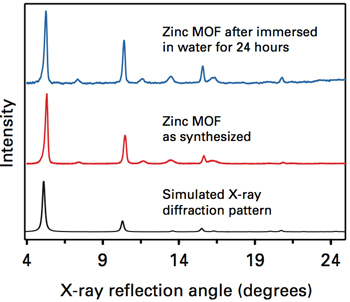 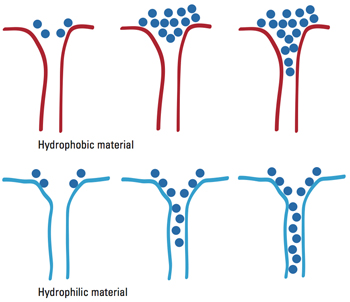 In practice, however, working with pyrazoles is tricky. “People knew that pyrazole-based MOFs were water-stable, but it was difficult to make them on a large scale,” says Dincă. “They’re just synthetically challenging to make.” To get around that problem, the MIT researchers devised a method of making their ligand using a form of naphthalene—an abundant, inexpensive material—and then adding on the pyrazoles at the end of the synthesis. “So we don’t have to worry about the synthesis of the pyrazole itself,” says Dincă. “With naphthalene as a repeating core, we can synthesize MOFs from pyrazole-based ligands and various metals easily, inexpensively, and at large scale. That’s important if we’re going to put a box of these in every household.”

The next step was to see if the MOFs could stand up to water. They synthesized samples with zinc—a benign metal—and immersed some of them in water. The upper left diagram shows the X-ray diffraction patterns of a soaked and a dry sample as well as a simulated pattern representing a pristine zinc MOF. The three curves show peaks at the same locations, indicating that the atoms are all in the same positions and the structure is unchanged by the soaking. While other MOFs lose their crystal structure at the slightest sign of moisture, the MIT ones can withstand being soaked—and even boiled—in water.

However, in other tests, the new water-resistant MOFs exhibited another problem: They don’t start adsorbing water until the relative humidity at their surface reaches 40%–50%. In that case, adsorption will begin only after significant evaporation and vapor buildup have occurred inside the heat pump. Given those limitations, the device won’t start operating until the temperature in the room is unacceptably high.

Close examination of the MOFs showed the problem: Their channels are of desirable dimensions, but their interiors are hydrophobic—“water hating”—and therefore reluctant to adsorb water, as the figure above demonstrates. The upper drawing shows a pore in a hydrophobic material. As water molecules arrive, they bunch up, entering the pore only after many have accumulated. As a result, adsorption begins only when the relative humidity is high. In contrast, the lower drawing shows the situation in a hydrophilic, or “water loving,” material. Now the arriving water molecules slide readily into the pore. There’s no need for them to accumulate, so adsorption begins when humidity is low.

To adjust the adsorption behavior of their MOFs, the MIT team decided to try changing the surface composition of the pores. They synthesized samples and then “decorated” the inside surfaces of the channels with atomic groups with well-documented affinities for water—some positive and some negative. They then tested the relative humidity at which the samples started to adsorb water. 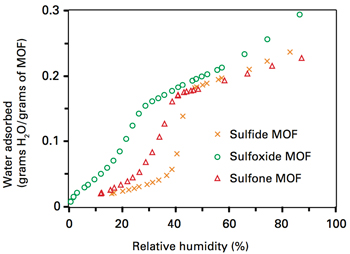 The results are shown in the figure above. The orange curve shows the effect of adding sulfide, which is hydrophobic. Significant water uptake doesn’t begin until the relative humidity reaches almost 50%. The green and red curves show the impact of adding sulfur plus one or two atoms of oxygen—molecules that are hydrophilic. Now the rapid rise in adsorption begins at a relative humidity as low as 20%. Calculations show that at this adsorption threshold, their MOF should start removing water at temperatures appropriate for indoor air conditioning.

The MIT researchers are continuing to improve their MOFs for use in heat pumps and other water-adsorbing devices. They are now working to increase the surface area so as to increase the amount of water that a MOF of a given dimension can hold. Their current “water loading” is acceptable, but they plan to make it far better, thereby reducing the amount of adsorbent material needed in a high-efficiency heat pump.

They are also developing designs in which metal blades run through the MOF in the outdoor box of the heat pump to help transfer the heat—a challenge in a material with so much void space. To that end, they have developed a controlled method of depositing MOF coatings on surfaces using electrochemistry. With this technique, they can make high-quality coatings on any conductive surface in 15 minutes at room temperature rather than 24 hours at 100°C, as required by conventional deposition methods.

By combining their abilities to deposit MOFs as high-quality coatings and to tune them for specific functions, Dincă and his team are now exploring novel approaches not only for air conditioning but also for gas separations, CO2 capture and storage, efficient and selective catalysis, desalination, and even novel MOF-based solar cells.

Says Dincă, “MOFs could be the wonder material that solves every problem. Now will they actually do that?” He and his team are working hard to find out.

Research on MOFs for adsorption-based heat pumps was supported by a seed grant from the MIT Energy Initiative (MITEI). Research on the deposition of MOFs on conductive surfaces was performed as a BP Technology Ventures Inc.–supported research project within MITEI. BP is a Founding Member of MITEI. Dincă is now forming a startup company to develop and market commercial products based on his novel materials, including “drop-in” replacement adsorbent components that will decrease the size and capital costs of current engineering designs for commercial adsorption chillers. Further information can be found in the following: