Women represent about a quarter of the workforce in science, technology, engineering and math, or STEM, fields. With these fields being the backbone of energy innovation, and with similar gender ratios in clean energy finance and policy, closing the gender gap and increasing women’s participation and leadership in this sphere is the goal of the U.S. Clean Energy Education and Empowerment (C3E) program.

A partnership between the Department of Energy (DOE) and MIT Energy Initiative (MITEI), the U.S. program is part of the international C3E Initiative within the 23-government Clean Energy Ministerial framework. The program held its second annual symposium, hosted by MIT, September 19 and 20 at the MIT Media Lab. 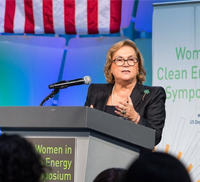 Guler Sabanci, the chair and managing director of Sabanci Holding – Turkey’s leading industrial and financial conglomerate – kicked off the day and a half event. Sabanci cited figures indicating that women make up 80 percent of humanities majors, but only 11 percent of electrical engineering majors and 20 percent of physics majors.

“We definitely need more capable, determined, innovative women to work with us,” Sabanci said, noting that both clean energy and women have been underutilized, “We all believe the future belongs to both of them.”

The issue, Sabanci said, is not just about bringing more women into the clean energy workplace, but realizing that women bring an important perspective as “change agents” in their communities – a theme reflected throughout the event.

One of the main goals of the C3E program is to build a community of professionals dedicated to recognizing and advancing the careers of women in clean energy. Part of that means highlighting role models for young women to follow, namely through the presentation of a Lifetime Achievement Award and six awards to mid-career women.

The mid-career award winners are selected each year from nationwide nominations and chosen by the C3E Ambassadors – a group of about 30 distinguished leaders in energy committed to championing the program’s success as spokespeople and mentors. Along with the recognition, they receive a $10,000 cash prize from MITEI for their clean energy work. 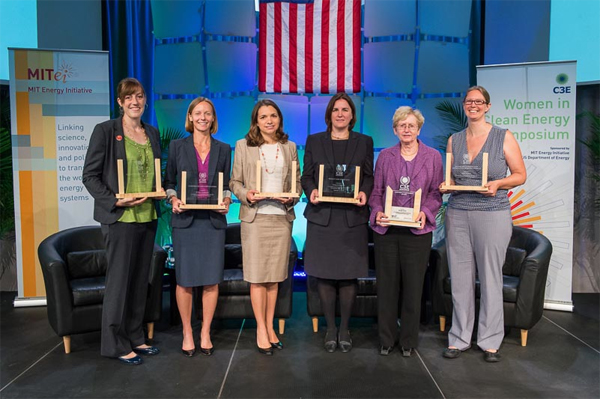 Additionally, the C3E Ambassadors presented the Lifetime Achievement Award to Maxine Savitz, former general manager at Honeywell, Inc., and current vice president of the National Academy of Engineering. Savitz’s four decades of service span government, industry and academia. During her career at Honeywell, Savitz oversaw the company’s technology partnerships program and supervised the development and manufacturing of innovative materials for the aerospace, transportation and industrial sectors. Previously, Savitz worked at DOE and its predecessor agencies, and served as the deputy assistant secretary for conservation.

C3E Ambassadors Marilyn Brown of the Georgia Institute of Technology, Sue Tierney of the Analysis Group and Mary Anne Sullivan of Hogan Lovells US LLP, presented Savitz with the award, saying “she’s done it all.”

Moniz, who served with Savitz on the President’s Council of Advisors on Science and Technology (PCAST), mentioned in his statement a PCAST task force they served on together that recommended approaches to accelerating energy technology innovation.

“This work led to President Obama’s directive in his Climate Action Plan for a Quadrennial Energy Review, a major undertaking to weave together the many threads of energy policy development,” Moniz’s statement said. “This is just one example of how Maxine has been a considerable force for clean energy – and a wonderful colleague too.”

In her acceptance speech Savitz named the factors that led to her success. In addition to having a strong education, she said surrounding yourself with good people is really important. “Networking with people. Collaborating with people. Things don’t happen when you don’t have good people working with you,” Savitz said. She also said having a passion for your work and the persistence to see it through is vital – along with having fun.

In addition to highlighting role models like Savitz and the other award winners, the symposium built on its goal of fostering a community of women in clean energy through “speed networking,” an interactive climate change negotiation simulation, and small group dinners hosted by the C3E Ambassadors. The conference was also webcast and moderators took questions from Twitter to engage a larger audience.

To further bring young women into the program, the symposium included 15 MIT undergraduate students that gave lightning presentations on their research.  MIT also ran a nationwide graduate student poster competition on the theme of climate change mitigation and adaptation. The 12 finalists of the competition displayed their posters at the event. Symposium participants voted by ballot for the best poster and chose MIT’s Carolyn Jenkins as the winner for her poster on the East Boston Buffer as a transferable urban framework for adapting to sea rise. Jenkins received a $5,000 prize for her research.

While building a community, the symposium also served to provide women – and men – in clean energy with a range of perspectives and analysis on the challenges and opportunities before them.

One challenge – for both start-ups and corporations – is bringing innovative clean energy technologies into the marketplace. MITEI’s Director Robert Armstrong said the way to do that successfully was to “link research to development to deployment, and that means working across government, universities, industry, and foundations.” Speakers from each of those spheres gave their insights during the symposium’s panel sessions. 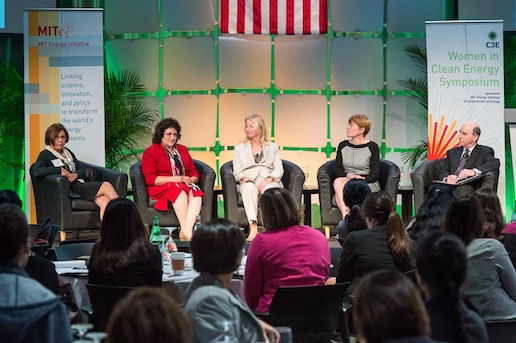 Karen Wayland from DOE’s office of Energy Policy and Systems Analysis, spoke about the actions the US government is taking to encourage energy innovation and confront the greatest challenge of our time: climate change.

“[Climate change] is real, it’s happening and it’s impacting our electricity system,” Wayland said. “And our energy system produces 85 percent of domestic greenhouse gases…We can’t do anything about climate change unless we do something about how we produce energy.”

Wayland emphasized that while there is a bottleneck in Congress, actions at the state and local levels as well as at the executive level are moving forward. She pointed specifically to new power plant standards, adaptation measures, and renewable energy and energy efficiency targets. But, she said, we need all the help we can get.

“We absolutely have to be doing [this work] with people from the outside,” Wayland said. “Hopefully, we’ll be working with all of you so we can chart a path forward toward transforming our energy system from one that’s dependent on carbon to one that’s dependent on innovation to help us confront the challenges of the 21st century….I hope that includes a growing number of women shepherding that transformation.”

While government actions are one way to lead this transformation, creating consumer demand is another piece of the puzzle, said Marilyn Brown, the Georgia Tech professor. “We used to point to the industrial titans, the oil barons and the utility CEOs as being the biggest part of the problem. But in a sense, you could argue today consumers are a big part of the problem and if we can get them to demand clean and green energy choices in the marketplace, then the market will be more responsive.”

Women and Clean Energy in the Developing World

Another goal of the U.S. C3E program is to create a model for other countries to follow. As such, India hosted the fourth Clean Energy Ministerial in April, which included a panel discussion of how to advance women in clean energy, not just at the professional level, but at the community level. To speak on the subject – as well as address the energy challenges of the developing world – was Jyoti Arora from India’s Ministry of Power.

Arora said women are “often in the driver’s seat as entrepreneurs and providers of sustainable energy solutions at the community level” – a point made evident by the considerable number of women entrepreneurs in the audience.  Katherine Lucey, one of the award winners, was one of those entrepreneurs.

Lucey’s organization, Solar Sister, uses women as their distribution network and equips them to sell solar lanterns and improved cookstoves in their communities. She said the women see a transformation in their communities, as households “go from a solar lamp, to a phone charger to a small home system and they come back and say ‘now how am I going to power my TV?’”

Arora said achieving this level of sustainable energy is necessary in the developing world because it “is an enabling factor for economic development, poverty reduction, and for…ensuring environmental sustainability and promoting gender equality.”

India – the world’s fourth largest consumer of energy –is paving the way for change by bringing electricity to communities that have never had it before through decentralized systems: solar street lights, solar lanterns, improved cook stoves, standalone solar and biomass-based power generation, and wind pumps being just a few examples.

Arora said, the “involvement of women in the design, distribution, management and consumption of sustainable energy solutions is essential in the quest for clean energy transformation.”

Her comments reflected Sabanci’s earlier remarks on the need for women as social agents of change, and the overall sentiment of the C3E program. Empowered by women young and old, from industry to government to the academy, and from the U.S. to countries throughout the world, C3E unites all women towards the goal of furthering clean energy leadership. 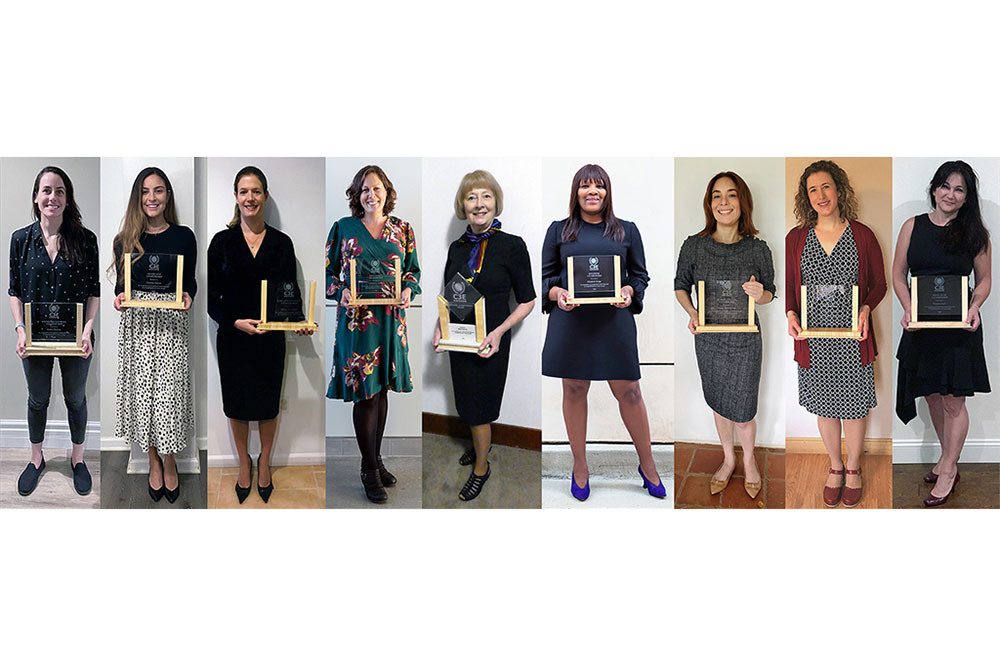 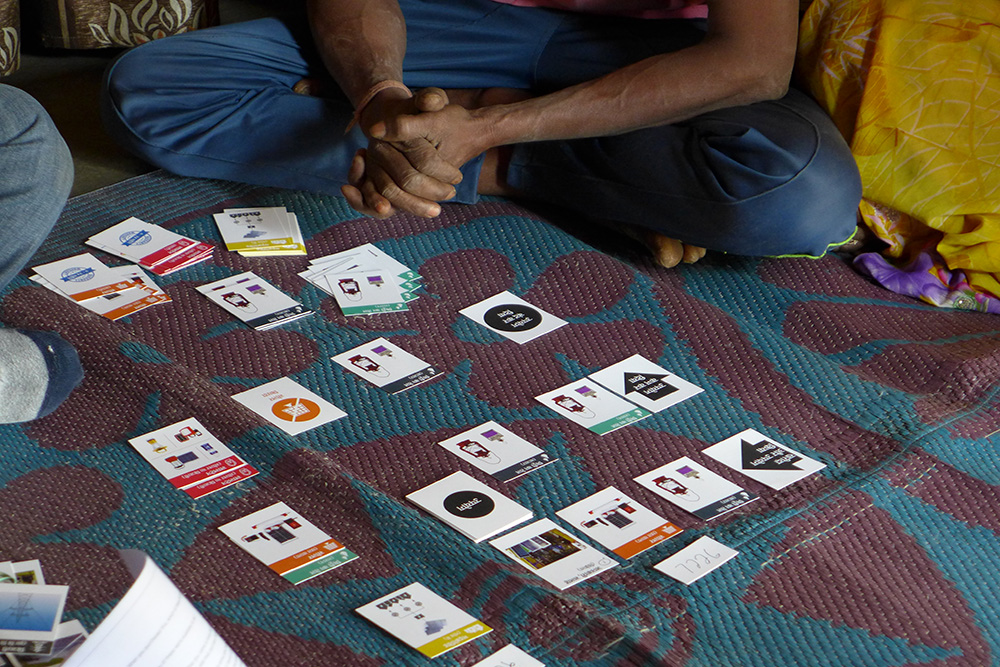