“I think we crystallized the essence of what energy education is at MIT. It had many different definitions before,” says Vladimir Bulovic, professor of electrical engineering and co-chair of the Energy Education Task Force (EETF). “With the collective knowledge of the participating faculty, we were able to pull together essential overlaps between different areas and distill the most important elements of what student energy education at MIT should be.”

Established in 2009, the energy minor is a coherent but flexible curriculum that includes more than 40 classes – many of them new. Students from any major can pursue the minor to gain fluency in a balanced core of energy issues and to deepen knowledge in specific areas of energy interest. The core of the minor is interdisciplinary: students must take foundational classes in the science, engineering/technology, and social science of energy.

The minor spans all five schools, so another accomplishment was the creation of a unique governing structture to manage it – the Inter-School Educational Council. “That is revolutionary,” says Donald Lessard, EPOCH Foundation Professor of International Management, who co-chaired the EETF during the development and launch of the minor. “There is no other five-school structure for an academic program at MIT.” “The validity of what we’ve done is shown through the output of the program,” Bulovic says, noting that more than 350 undergraduates – nearly 9% of the undergraduate student body – were enrolled in energy classes developed or adapted with EETF support during the 2010–11 academic year. Three students graduated with the energy minor in 2010 (the first year it was offered), and 13 in 2011. At press time, the 2012 cohort of energy minor applicants numbered 20 students.

The task force has been successful in part because the MITEI vision was one that inspired donors, according to Robert Armstrong, Chevron Professor of Chemical Engineering and MITEI deputy director. When the task force was launched in 2006, the opportunities for energy-relevant education at MIT were diffuse and uncoordinated. “The charge for MITEI’s Energy Education Task Force was to articulate a shared set of principles for undergraduate and graduate energy education at MIT, and to develop and implement a prioritized set of programs to deliver this education,” he says. 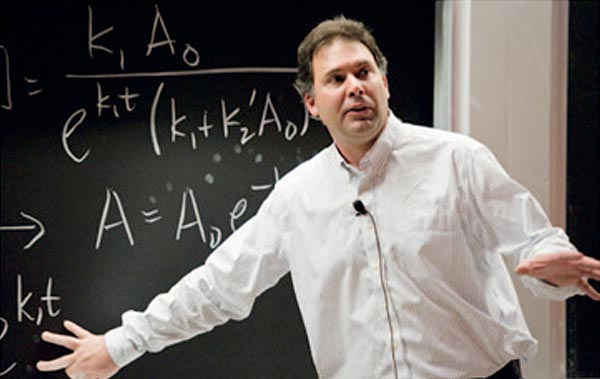 Andrei Tokmakoff, professor of chemistry, works through equations with students in Thermodynamics and Kinetics (5.60), which he co-teaches with Robert Silbey, also professor of chemistry. The Energy Education Task Force provided support for expanding energy-focused content in this class, which enrolls about 150 students each year.

The EETF includes faculty from 11 departments and all five schools at MIT, as well as undergraduate and graduate student representatives.

Since 2006, energy education efforts at MIT have attracted several major gifts, starting with $1 million in early funding from the Kabcenell Foundation and including a donation of $2.4 million from an anonymous alum and $5.4 million from the S.D. Bechtel, Jr. Foundation in 2009 to support the development of new classes, web resources, and the refurbishment of teaching space.

The task force has put that funding to use across campus, sponsoring curriculum development in all five schools with an emphasis on populating the interdisciplinary core of the minor, supporting textbook development, increasing opportunities for first-year students to be involved, and expanding offerings in project-based classes. “We’ve tried to embed energy learning opportunities throughout the curriculum,” says Amanda Graham, director of MITEI’s Education Office. The task force also collaborates with OpenCourseWare to publish energy classes for use beyond the Institute.

One of MITEI’s most important educational activities is the Society of Energy Fellows at MIT, which has supported nearly 200 graduate and postdoctoral fellows to date, through the sponsorship of MITEI’s Founding, Sustaining, and Associate Members. “That program has been a big boost to departments seeking to entice students into energy, to support energy research, and to foster the energy research community,” Graham says.

At the undergraduate level, MITEI support for research via the Undergraduate Research Opportunities Program (UROP) has grown from 8 projects in the summer of 2008 to 29 in 2011, thanks to rapid growth in sponsorship by MITEI members as well as private donors. In addition, for the past three years, MITEI has offered an energy-focused pre-orientation program to freshmen, a hands-on introduction to all things energy at MIT that lasts four and a half days. This summer, 20 freshmen participated in “Discover Energy: Learn, Think, Apply,” receiving an introduction to energy-focused students, faculty, research, and extra-curricular activities at MIT.

Together, MITEI and the task force have big plans. Bulovic says one project in the pipeline is a program that would help students attain meaningful energy-focused experiences in business and industry. “Our intent is very much to provide both theoretical and practical experience,” he says.

The task force is also exploring a more focused offering for graduate energy education, such as a certificate or master’s program. And it is working with the Campus Energy Task Force to find more significant ways to use the campus as a living laboratory for energy research.

“It’s a very powerful educational motivator to be able to fix the place in which you live,” Graham says. “Collaboration with the Department of Facilities and other key MIT units is increasingly paying both intellectual and practical dividends.”

Fortunately, at five years old, the EETF is young and energetic. “We’ve done a lot, but we have many next steps to take,” Bulovic says.