Undergraduates taking 10.27, the Energy Engineering Projects Laboratory, may find themselves far outside their comfort zones, says Clark Colton, a professor in the Department of Chemical Engineering. But Colton would not have it any other way. Students accustomed to homework sets and solutions must instead formulate their own problems and “figure out the best paths to take,” says Colton, who shaped this Energy Studies Minor elective. “One of the culture shocks students experience in this class is that there’s not always an answer.”

10.27 is the latest entry in a grand 75-year-old MIT tradition, according to Colton. The semester-long project class for undergrads is designed not just to stimulate “creative and critical thinking,” he says, but to equip students with a host of skills essential for navigating the ambiguities and hurdles of actual engineering ventures. Assigned real problems suggested by industry partners and by MIT’s own research faculty, students learn to discover solutions, work in teams, and write reports. In the case of 10.27, which joins project classes on chemical and biological engineering, the focus is energy, “the number one technical topic in our country, which relates to the economy, national security, and the environment,” says Colton. “Amongst students, it’s a biggie, a very important problem.”

Two years since it joined the curriculum, student demand for 10.27 runs greater than available slots for the subject—perhaps because the class offers students a unique opportunity to actually contribute to the field of energy. “It was really exciting to get results and learn about something that no one else had seen,” says Marie Burkland ’13 of chemical engineering. She was part of a three-person team investigating a new phenomenon called thermopower waves—a way of converting chemical energy to electrical energy through the use of carbon nanotubes.

Michael Strano, the Charles and Hilda Roddey Professor of Chemical Engineering, was behind the discovery of this phenomenon and served as an instructor for 10.27. He assigned Burkland’s group the research goal of trying to improve the energy efficiency of the process—an initial step in deploying thermopower waves in a battery or power source device. There is no “canned solution” to this kind of problem, says Strano. He can “seed students with ideas” and teach them how to make a device to measure electrical power, but “there is still a discovery aspect, because things they are observing are new even to me.” 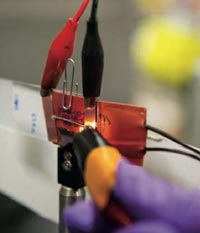 Burkland says her group “bounced ideas off of Professor Strano and his grad student for a couple weeks” to figure out what areas might prove most fruitful to investigate. “They gave us ideas for where there could be improvements,” she says. Burkland found the process highly motivating: “It’s exciting; you can make your own rules, take the project in the direction you want.” By the end of 13 weeks, Burkland’s group had invented a new method for starting a reaction in the carbon nanotubes: “We did it with a resistance wire that gets really hot, is really precise, and all you have to do is touch it to the nanotube device to start a reaction.” This innovation not only allows greater control over the amount of energy required to start the wave, notes Strano, but also is very practical because “it is easy to press a button to start this kind of ignition.” Says Burkland, “It’s a step toward an application in the real world.”

“MIT undergraduates are really bright and are able within a short period of time to understand a problem and come up with their own ideas,” says Strano. “This is what makes it very different from conventional lab courses. There’s no TA telling them what to do.” When unexpected obstacles emerged, says Strano, “they had to deviate from plans. They made new objectives and solved some experimental problems that nobody had solved before.” In a course like 10.27, it’s not just the students who learn. “It’s a special space,” says Strano.

While 10.27 was “a ton of work,” states Burkland, with students often putting in extra lab hours, mastering new technologies, negotiating roles within their teams, and delivering written and oral presentations to other groups, it also was an invaluable experience, she believes. She planned an experiment, collected and analyzed data, generated technical reports—all skills Burkland says she applied in a summer research job. “I say, wow, I know all this stuff. I don’t have to seek help for how to manage a project, document it, and produce results in an effective way.”

This is precisely the point of 10.27, suggests Colton: “Every student must learn the details of their application— everyone must learn at the beginning what it’s all about, just like real life. When you go to a company you have to start with the basics of that industry, applying what you know. We do it here, in a microcosm.” Colton has high expectations for the 60 or so students who have already taken 10.27 and for the next cohort: “I fully expect students in this course to be involved in innovations in industry, solving important problems, becoming entrepreneurs and leaders.”

Development and the first three years of delivery of 10.27 were supported by a grant from the S.D. Bechtel, Jr. Foundation.