MIT researchers have developed a simple procedure for making a promising type of solar cell using lead recovered from discarded lead-acid car batteries—a practice that could benefit both the environment and human health. As new lead-free car batteries come into use, old batteries would be sent to the solar industry rather than to landfills. And if production of this new, high-efficiency, low-cost solar cell takes off—as many experts think it will—manufacturers’ increased demand for lead could be met without additional lead mining and smelting. Laboratory experiments confirm that solar cells made with recycled lead work just as well as those made with high-purity, commercially available starting materials. Battery recycling could thus support production of these novel solar cells while researchers work to replace the lead with a more benign but equally effective material.

Much attention in the solar community is now focused on an emerging class of crystalline photovoltaic materials called perovskites. The reasons are clear. The starting ingredients are abundant and easily processed at low temperatures, and the fabricated solar cells can be thin, lightweight, and flexible—ideal for applying to windows, building facades, and more. And they promise to be highly efficient.

Unlike most advanced solar technologies, perovskites are rapidly fulfilling that promise. “When perovskite-based solar cells first came out, they were a few percent efficient,” says Angela Belcher, the James Mason Crafts Professor in biological engineering and materials science and engineering at MIT. “Then they were 6% efficient, then 15%, and then 20%. It was really fun to watch the efficiencies skyrocket over the course of a couple years.” Perovskite solar cells demonstrated in research labs may soon be as efficient as today’s commercial silicon-based solar cells, which have achieved current efficiencies only after many decades of intensive research and development.

Research groups are now working to scale up their laboratory prototypes and to make them less susceptible to degradation when exposed to moisture. But one concern persists: The most efficient perovskite solar cells all contain lead. 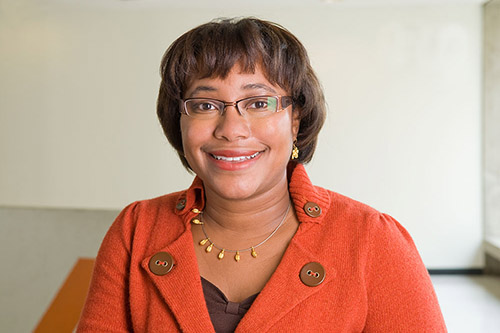 That concern caught the attention of Belcher and her colleague Paula Hammond, the David H. Koch (1962) Professor in Engineering and head of the Department of Chemical Engineering at MIT. Belcher and Hammond have spent decades developing environmentally friendly synthesis procedures to generate materials for energy applications such as batteries and solar cells. Although lead is toxic, in consumer devices it can be encapsulated in other materials so it can’t escape and contaminate the environment, and it can be recovered from retired devices and used to make new ones. But lead mining and refining raise serious health and environmental issues ranging from the release of toxic vapors and dust to high energy consumption and greenhouse gas emissions. Therefore, research teams worldwide—including Belcher and Hammond—have been actively seeking a replacement for the lead in perovskite solar cells. But so far, nothing has proved nearly as effective.

Recognizing the promise of this technology and the difficulty of replacing the lead in it, in 2013 the MIT researchers proposed an alternative. “We thought, what if we got our lead from another source?” recalls Belcher. One possibility would be discarded lead-acid car batteries. Today, old car batteries are recycled, with most of the lead used to produce new batteries. But battery technology is changing rapidly, and the future will likely bring new, more efficient options. At that point, the 250 million lead-acid batteries in US cars today will become waste—and that could cause environmental problems.

“If we could recover the lead in those batteries and use it to make perovskite solar cells, it’d be a win-win situation,” says Belcher.

According to Belcher, recovering lead from a lead-acid battery and turning it into a perovskite solar cell involves “a very, very simple procedure”—so simple that she and her colleagues posted a video of exactly how to do it. The sequence of steps is illustrated in the diagram below. The first step—getting the lead out of the car battery—might seem a simple proposition. Just remove the battery from the car, cut it open with a saw, and scrape the lead off the two electrodes. But opening a battery is extremely dangerous due to the sulfuric acid and toxic lead inside it. (In fact, when Belcher learned that high school students were recreating the procedure for science fair projects, she had her team delete that section of the instructional video.) In the end, Po-Yen Chen PhD ’15, then a chemical engineering graduate student and an Eni-MIT Energy Fellow and now a postdoc at Brown University, arranged to have a battery-recycling center near his home in Taiwan perform the disassembly process. 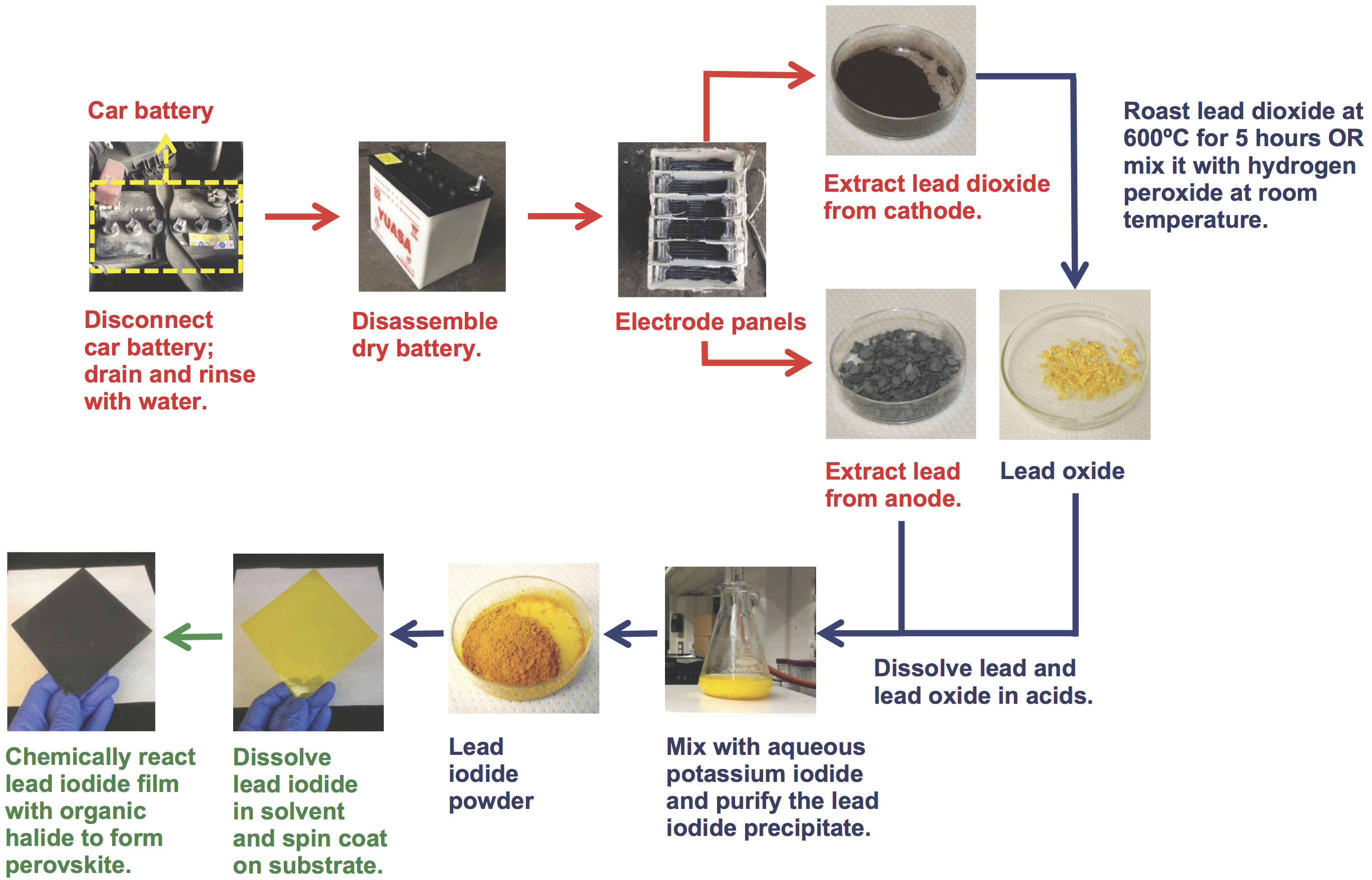 This figure shows how to synthesize lead iodide perovskite from a lead-acid battery. The simple process calls for three main steps: harvesting material from the anodes and cathodes of the car battery (shown in red); synthesizing lead iodide from the collected materials (blue); and depositing the perovskite film (green).

Back at MIT, clad in protective clothing and working inside a chemical hood, the researchers carefully scraped material off the electrodes and then followed the steps in the illustration to synthesize the lead iodide powder they needed. They then dissolved the powder in a solvent and dropped it onto a spinning disk made of a transparent conducting material, where it spread out to form a thin film of perovskite. After performing a few more processing steps, they integrated the perovskite film into a functional solar cell that successfully converted sunlight into electricity.

The simple procedure for recovering and processing the lead and making a solar cell could easily be scaled up and commercialized. But Belcher and Hammond knew that solar cell manufacturers would have a question: Is there any penalty for using recycled materials instead of high-quality lead iodide purchased from a chemical company?

To answer that question, the researchers decided to make some solar cells using recycled materials and some using commercially available materials and then compare the performance of the two versions. They don’t claim to be experts at making perovskite solar cells optimized for maximum efficiency. But if the cells they made using the two starting materials performed equally well, then “people who are skilled in fine-tuning these solar cells to get 20% efficiencies would be able to use our material and get the same efficiencies,” reasoned Belcher.

The researchers began by evaluating the light-harvesting capability of the perovskite thin films made from car batteries and from high-purity commercial lead iodide. In a variety of tests, the films displayed the same nanocrystalline structure and identical light-absorption capability. Indeed, the films’ ability to absorb light at different wavelengths was the same.

They then tested solar cells they had fabricated from the two types of perovskite and found that their photovoltaic performance was similar. One measure of interest is power conversion efficiency (PCE), which is the fraction of the incoming solar power that comes out as electrical power. The figure below shows PCE measurements in 10 of the solar cells fabricated from high-purity lead iodide and 10 fabricated from car batteries. Because efficiency measurements in these types of devices can vary widely, the figure presents not only the highest PCE achieved but also the average over the entire batch of devices. The performance of the two types of solar cells is almost identical. “So device quality doesn’t suffer from the use of materials recovered from spent car batteries,” says Belcher. 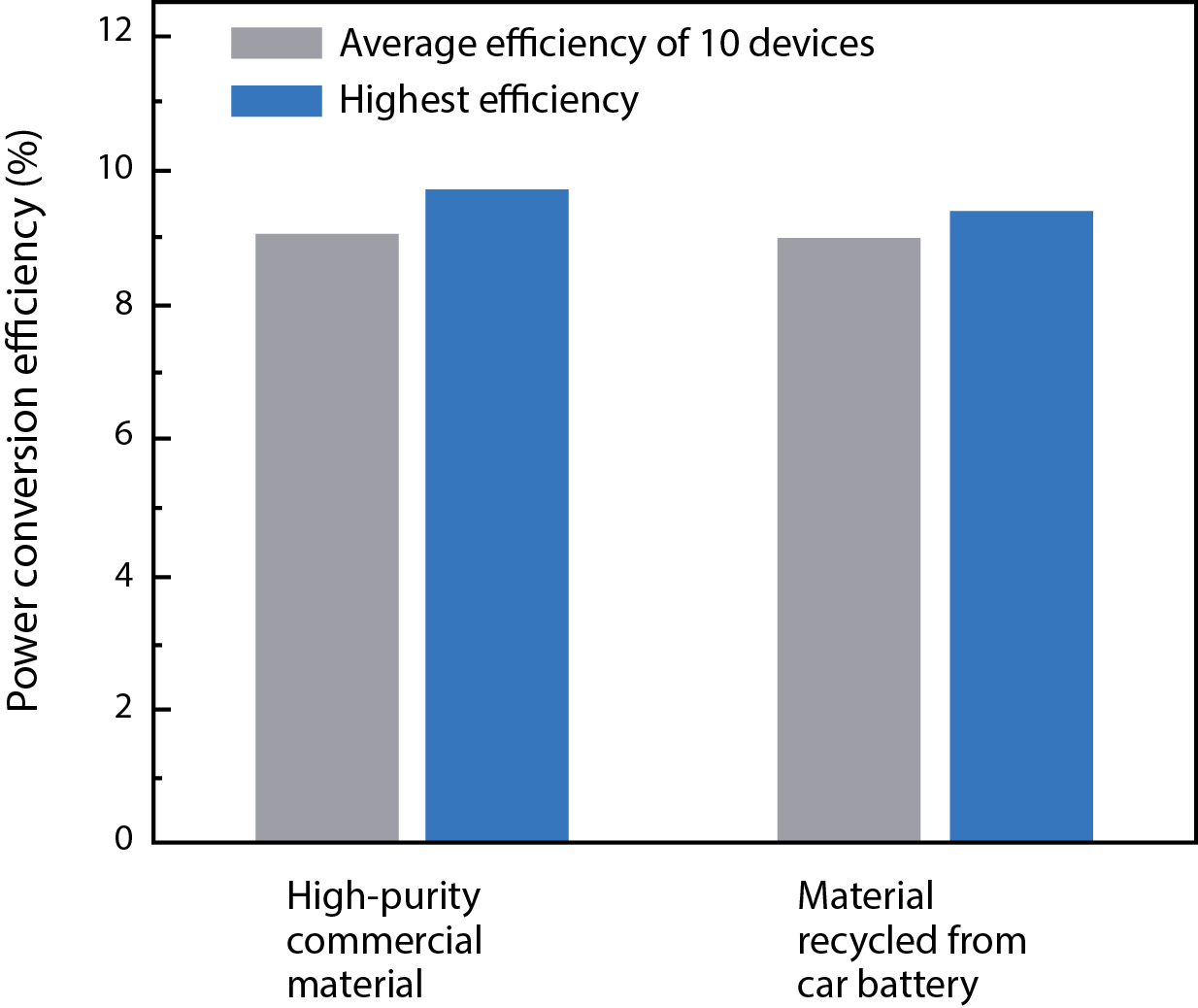 This figure shows power conversion efficiency—the fraction of incoming solar power converted to electricity—in solar cells that the researchers fabricated using starting materials purchased from a vendor (left) and recovered from a spent lead-acid car battery. In each case, the gray bar shows the average efficiency of 10 devices, while the blue bar shows the highest efficiency achieved in a single device. Performance in the two groups of devices is essentially the same, confirming that using recycled material does not compromise device quality.

Taken together, these results were extremely promising—but they were based on solar cells made from a single discarded car battery. Might the outcome be different using a different battery? For example, they were able to recover more than 95% of the usable lead in their battery. Would that fraction be lower in an older battery? And might the quality or purity of the recovered lead differ?

To find out, the researchers returned to the Taiwanese recycling center and bought three more batteries. The first had been operating for six months, the second for two years, and the third for four years. They then followed the same procedures to recover and synthesize the lead iodide and fabricate and test solar cells made with it. The outcome was the same—with one exception. In the older batteries, some of the lead occurs in the form of lead sulfate—a result of reactions with the sulfuric acid electrolyte. But they found that their original procedures were effective in recovering the lead from the lead sulfate as well as from the other compounds inside the batteries.

Based on their results, Belcher and Hammond concluded that recycled lead could be integrated into any type of process that researchers are using to fabricate perovskite-based solar cells—and indeed to make other types of lead-containing solar cells, light-emitting diodes, piezoelectric devices, and more.

A simple economic analysis shows that the proposed battery-to-solar-cell procedure could have a substantial impact. Assuming that the perovskite thin film is just half a micrometer thick, the researchers calculate that a single lead-acid car battery could supply enough lead for the fabrication of more than 700 square meters of perovskite solar cells. If the cells achieve 15% efficiency (a conservative assumption today), those solar cells would together provide enough electricity to power about 14 households in Cambridge, Massachusetts, or about 30 households in sunny Las Vegas, Nevada. Powering the whole United States would take about 12.2 million recycled car batteries, fabricated into 8,634 square kilometers of perovskite solar panels operating under conditions similar to those in Nevada.

In the long term, of course, the best approach would be to find an effective, nontoxic replacement for the lead. Belcher and Hammond continue to search for a suitable substitute, performing theoretical and experimental studies with various types of atoms. At the same time, they have begun testing the impact of another approach: replacing a portion of the lead with another material that may not perform as well but is more environmentally friendly. Already they’ve had promising results, achieving some “pretty decent efficiencies,” says Belcher. The combination of their two approaches—using recycled lead and reducing the amount required—could ease near-term environmental and health concerns while Belcher, Hammond, and others develop the best possible chemistry for this novel solar technology.

This research was supported by the Italian energy company Eni S.p.A., a Founding Member of the MIT Energy Initiative. Further information can be found in: