Climate negotiation role-play in Paris feels like the real thing

The MIT Energy Initiative is sharing reports from the United Nations Climate Change Conference in Paris, where MIT faculty and students are participating as observers to climate negotiations and hosting several programs, which will be covered over the coming week.

As delegates work to cut global greenhouse gas emissions at the United Nations Climate Change Conference (COP21) talks in Paris, a vibrant hub of activity next door in the conference’s “Climate Generations” area attracts people from around the world. Environmental and energy non-governmental organizations and agencies engage visitors in their work through visualizations and demonstrations, while numerous conference sessions range in topics from ocean sustainability to green growth in Africa.

In one of the conference rooms on Friday, Dec. 4, United Nations Secretary-General Ban Ki-Moon instructs delegates on how to begin their climate negotiations. Only the Secretary-General isn’t himself today: His part is being played by MIT Professor John Sterman. And the “delegates” are actually visitors to COP21, some here on behalf of organizations, others as interested citizens. All have gathered to play “World Climate,” a live-action role-playing simulation developed by Sterman and MIT alumnus Andrew Jones of the not-for-profit Climate Interactive. “World Climate” helps policymakers, business leaders, and citizens understand first-hand the complexities of the climate and global negotiations — and what’s needed to limit anthropogenic climate change.

The “World Climate” Project was launched in August 2015 at the White House and has since been used in more than 45 countries, from Argentina to Zimbabwe — with more than 10,000 participants to date. The simulation held here at the Paris climate talks brings diverse perspectives together. “The participants came from a wide range of countries and ethnicities, and about half were women, which was great to see,” Sterman says.

Sterman and Jones, with MIT researcher and Climate Interactive program director Travis Franck (S.M ’05, Ph.D. ’09), University of Massachusetts professor Juliette Rooney-Varga, and Climate Interactive’s Ellie Johnston begin the role-play for the large group that has assembled. Sterman asks, “Who here is from the European Union?” Hands go up. “Great! Today, you represent China. Now, who here is from China? Today, you are the United States.” Taking roles completely different from their own backgrounds helps participants experience challenges they might not otherwise consider. Others such as Thango, a young woman from South Africa well versed in the issues facing her country and continent, play more familiar roles. She joins the group representing the developing nations. For Thango, it’s an opportunity to share with fellow delegates the struggle of the developing nations to develop sustainably even as they stand to suffer the most from climate change.

Discussions quickly become heated, with delegates taking their new national identities seriously. At the end of the first round of negotiations, a representative of each delegation addresses the plenary assembly. In their roles as national leaders — Barack Obama of the U.S., Vladimir Putin of Russia, Narendra Modi of India, François Hollande of France, and Xi Jinping of China — participants explain their emissions pledges and financial commitment or demands.

Then Sterman and Franck plug the delegates’ pledges into the C-ROADS climate policy simulation developed by Sterman and Climate Interactive. C-ROADS is a peer-reviewed model that matches the dynamics of the models used by the Intergovernmental Panel on Climate Change, but runs in about one second on an ordinary laptop. The model and materials to facilitate the entire “World Challenge”exercise are freely available through Climate Interactive’s website.

As Sterman enters the pledges, the delegates see global emissions flatten, but when the last pledge is recorded, the model shows that the world will still warm by 3.5 degrees Celsius (6.3 degrees Fahrenheit) by 2100, leading to ocean acidification and other harms, including about a meter of sea level rise. Sterman and the team drape the participants with a billowing cloth to show how many parts of the world will be inundated despite the emissions reductions they have pledged.

“The first round’s pledges produced results extremely close to the initial pledges here in Paris — nowhere near enough to curb climate change,” Sterman says. “When the delegates in the workshop saw this, some were shocked, because they thought their pledges would get the job done.”

Sterman and team give the participants another chance to reach stronger agreements. Raymond Song, a high school student from China representing the U.S. in the game, channels President Barack Obama with an impassioned plea for the other developed nations to step up — and pledges that the U.S. will do more. Intense negotiations ensue, with India agreeing to emissions cuts in exchange for financial assistance from developed nations and China pledging future emissions cuts, leading to a much more promising outcome.

“The model provides people with immediate feedback on the consequences of their proposals,” Sterman says. “They saw how much their countries will suffer without deeper emissions cuts, and that motivated them to reach a much better agreement,” limiting warming to just about 2 C (3.6 F), the limit the nations of the world have declared must not be exceeded.

The passionate dialogue generated by the mock-debate is an example of why MIT representatives are here in Paris: to help make climate issues more accessible and understandable; to convey the monumental importance of taking strong collective action to combat global climate change; and to share climate research with scientific peers and journalists.

For participants in the “World Climate” role-play, the simulation has been an eye-opening experience: “I really liked the game. It made me understand how negotiations work, [and] the importance of talking about the impact of climate change on [people’s] lives,” says Thango. She plans to use the game to educate girls she works with in South Africa on how countries can use the negotiations to collectively meet global emissions reductions goals. 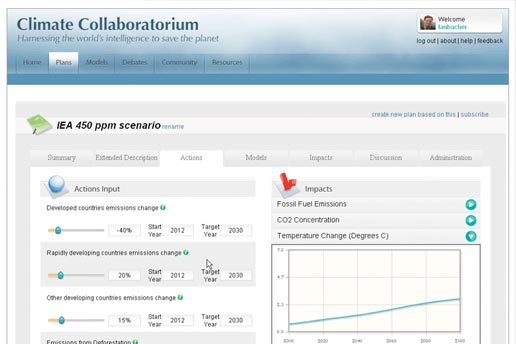